v 2021 Sports in Kansas 3A All-State Softball Team - Sports in Kansas 
Warning: include(../includes/bodytag.php): failed to open stream: No such file or directory in /home/kansass/public_html/ks/news/index.php on line 36 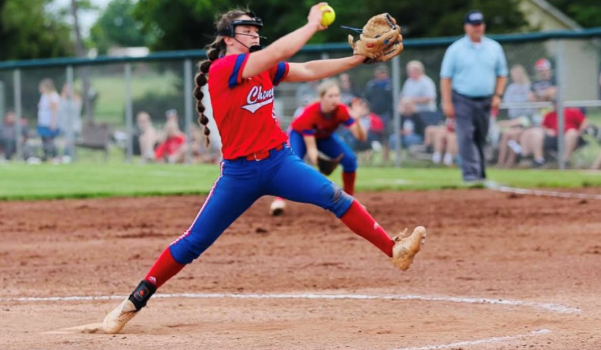 2021 Sports in Kansas 3A Softball Player of the Year

Cheney coach Matt Johnson believed Cardinal junior Korri Lies was the 3A Most Valuable Player at the state tournament – and the classification’s top pitcher. There was also strong consensus that Lies was the best player in 3A all spring. Johnson believed Lies “has done it all,” both pitching and hitting. Lies finished 15-0 with a 1.32 earned-run average. She delivered 145 strikeouts against 10 walks and had an ERA under 1.00 before the state tournament. At the plate, Lies carried a .446 average and delivered the walk-off hit to beat Rock Creek in the state quarterfinals. Johnson said he was “really thankful” that RC didn’t walk Lies in that situation.

Cheney finished 25-1 and captured the first state softball championship in school history. The Cardinals, seeded first in ’19, lost in the quarterfinals to Frontenac, which went onto win the state title.

Cheney came back to beat Rock Creek, 6-5, in the quarterfinals. In the semifinals, the Cardinals defeated Hoisington/Central Plains, 4-2. For the finals, Cheney held off Silver Lake, 1-0.

Johnson told SIK that he has been in contact with Kansas softball regarding Lies. She has a goal to play Division I softball. At state, Lies threw all 21 innings. She faced 89 batters and struck out 31 against only three walks.

Congratulations to Cheney’s own, Korri Lies! We’ll PITCH our wagon to yours any day! From your family at Eaton Roofing & Exteriors, we are so proud of you and know the future is so bright.
--

Sports in Kansas 2021 3A Softball Coach of the Year

Cheney coach Matt Johnson has long been influential in starting, developing and growing the Cardinal softball program. Johnson recently retired after a 27-year stint as a Cheney teacher and had continued to coach. At the start of the season, Johnson told his team “this is our year,” and believed Cheney had the experience, talented youth, good bats and an ace pitcher in junior Korri Lies.

Cheney, led by multiple veterans, including Lies, Scheer, and outfielder Lexi Cline and several coaching moves, finished 25-1 and won the 3A state championship. Cheney enjoyed a remarkable volleyball, basketball and softball season with a combined 78-5 record. The Cardinals posted an undefeated year in girls’ basketball with many of the same girls for softball.

Lies was the consensus 3A Player of the Year for softball. Scheer is headed to Emporia State basketball. Johnson believed Scheer, a quick, left-handed, slap hitter with a great outfield arm, could have been a Division I softball player.

Scheer led Cheney with a team-high .600 average, along with 45 runs scored and 38 steals with just one caught stealing. Lies hit .446, along with 145 strikeouts in the circle. Elina Bartlett carried a .560 average with a team-high 38 RBI and had key hits in the regional win versus Kingman/Norwich. Cheney hit .462 as a team. Johnson was extremely pleased with his squad up and down the roster and said all the girls “can truly believe” they contributed to the state title.

Cline, a stalwart defensive player in volleyball and basketball for several years, came back at the end of basketball after a collarbone injury. Johnson moved her from left field to right field. Johnson said it took Cline a little while to buy into the change.

Then, Cline liked right field more than left field because she got more plays. Johnson said Cline made probably more diving catches in right field than any girl he’s ever had. Cline would also play very close to the infield but never get burned. Cline hit second early, and Johnson moved her to eighth. In the state title game, Cheney’s No. 2 hole hitter, second baseman Jailyn Adolph accounted for the only run with her first over-the-fence homer of the year.

In ’19, Lexi Lorenz split catching duties. This year, she moved from third base to catcher full-time and did a fine job catching Lies.

Another pivotal change involved sophomore shortstop Anna Martin and McCormick, a strong powerlifter. McCormick finished fifth in the Class 3A state powerlifting meet in the 148-pound class with a total weight of 475 points.

Compared to Martin, McCormick carried a higher batting average, and Johnson elected to use her as a DH. In the state quarterfinals, McCormick keyed the Rock Creek comeback with a big homer. Later in the state tournament, Cheney needed a bunt. Martin was a better bunter for McCormick and delivered a bunt. Overall, McCormick hit .457 with 33 RBI.

2021 Sports in Kansas 3A All-State Softball