v 2021 Sports in Kansas 2-1A All-State Softball Team - Sports in Kansas 
Warning: include(../includes/bodytag.php): failed to open stream: No such file or directory in /home/kansass/public_html/ks/news/index.php on line 36

Kaitlin Crossland led Colgan to back to back state titles. (Patty Jesse) 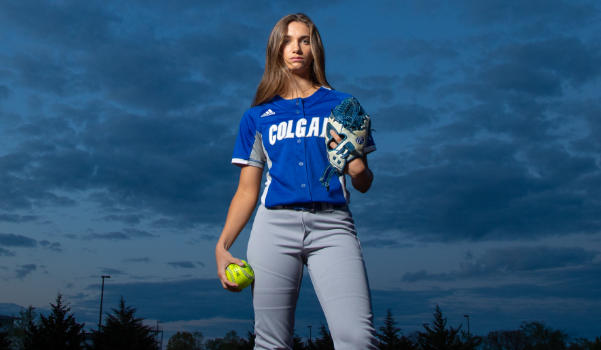 2021 Sports in Kansas 2-1A Softball Player of the Year

All season, Pittsburg-Colgan was the significant Class 2-1A state favorite to repeat as the state softball champion after the 2019 state title. Colgan returned multiple key players from its ’19 team, including twins Ashley and Allie Marietta and pitcher Kaitlin Crossland, the reigning 2-1A Player of the Year. Crossland completed a highly elite three-sport career with another 2-1A Player of the Year honor.

Against a strong CNC schedule, Crossland struck out 205 batters against 30 walks. Crossland collected first team all-league unanimous honors at pitcher. She earned KODE Athlete of the Year and Kansas High School Sports Awards Top 12 Selection (all classes). Crossland graduated co-valedictorian and had numerous college offers for volleyball and softball. Crossland had elected to be a student at the University of Arkansas and study Biology/Pre-Med in the Honors Program.

Pepsi of Pittsburg is proud to support local athletics and the St. Mary's Colgan Panthers. Congrats to the 2021 SMC softball team for bringing home the state title.

Congratulations to Kaitlin Crossland!  We are so proud of you!! The Hamilton Family. Kevin Hamilton of Edward Jones is proud to support the SMC Panthers. Congrats on the 2021 2-1A state title.

Congratulations, Kaitlin Crossland, on being selected 2021 2-1A Softball Player of the Year.  Crossland Construction Company, Inc is proud to support Colgan Panther Athletics!

Congratulations Kaitlin on being named the 2021 player of the year!  You have worked extremely hard for this well deserved honor.  So proud of you.  From everyone at PRG Professional.

Pittsburg-Colgan was the favorite throughout the spring and captured the state title, its second straight after winning in ’19. However, SIK noted multiple times this spring the high number of historical seasons for other top 2-1A teams. Coach Annie Dellasega has led Colgan to both titles.

Among the state teams, Marion (21-3) went to the state tournament for the first time. Mission Valley (24-2) took third place for its top finish since ’03. Belle Plaine was 31-45 in the last five years. This season, Belle Plaine went 20-5 and earned a final four showing. BP enjoyed its best season in more than two decades. Belle Plaine softball was the lone squad to beat Cheney in girls’ basketball and softball this year.

Coach Creighton Winters, who also enjoyed a strong run as Burlingame’s boys’ basketball coach, has led Burlingame softball to state in ’19 and ’21. Daelyn Winters had a strong softball season and won four state track medals and was a part of two school record relays.

Graci Masters and Crook served as a talented 1-2 in the circle all spring. Against Northern Heights, both pitchers threw a no-hitter. Earlier in the season, Masters had no-hitters against Southern Lyon County and Wichita Homeschool. Burlingame split with Oskaloosa in the regular season; Oskaloosa finished 18-5. Before then, Burlingame was 0-16 against Oskaloosa since ’13.

IF- Jayden May, Marion