v American Implement Team of the Week:Oberlin-DCo. Track - Sports in Kansas 
Warning: include(../includes/bodytag.php): failed to open stream: No such file or directory in /home/kansass/public_html/ks/news/index.php on line 36 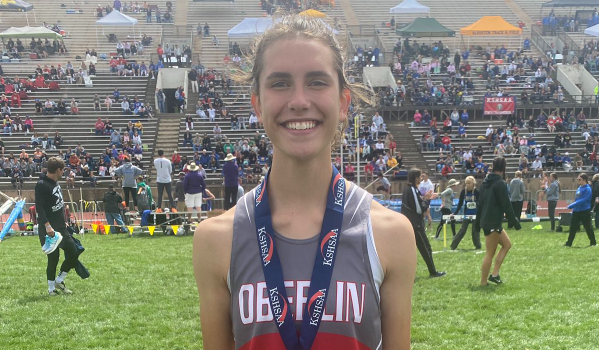 Oberlin-Decatur Community freshman Rayne Erickson shined in seventh grade track two years ago. That year, Erickson won all four events at the Norton Invitational, in the 400, 800, long jump and high jump. She followed that with titles in the 200 and 1,600 at the Rawlins County meet. Erickson collected three more crowns at St. Francis, and four apiece at the Hoxie, SF Quad and Dighton Quad.

Like all athletes, Erickson missed last spring because of the COVID-19 pandemic. This year, Erickson continued her dominance in the 200, 400, 800 and high jump throughout northwest Kansas – and at the Class 1A state track and field meet last Saturday at Wichita State University’s Cessna Stadium.

Erickson tallied 32 points. Brynna Addleman earned seventh in the shot put with a mark of 34-9.25 for two points.

Kiowa County finished first with 64 points. Hodgeman County was second with 35 points. Beloit-St. John’s and Oberlin tied for third and the final team plaque with 34 points.

Erickson captured the high jump with a 5-6 clearance.

Erickson tied with five others for the third-best jump in Kansas with a 5-6 clearance. Taryn St. Clair from Class 6A Wichita North had the state’s best jump with a 5-8 clearance. Chaparral’s Matte Swartz went 5-7.

Of the next five jumpers, four were 5A or 6A, including St. Thomas Aquinas’ Caroline Bien, the 5A Volleyball Player of the Year and a Kansas signee.

Erickson was Oberlin’s first track champion since Demi Murray won the javelin in 2015.

Those are Oberlin’s lone girl individual champions since 1993 when Sherri and Traci Elwood combined for four championships. Sherri won the 800, 1,600 and 3,200, and Traci captured the high jump. Elwood holds the school high jump record at 5-7, set in 1991.

captured the 200, 400, 800 and high jump at the Northwest Kansas League meet two weeks before state. Erickson cleared 5-6 at league, which ties the NWKL meet record from 1988.

Erickson is one of three Oberlin girls to have or co-have a league record. Tarah Cook holds the 200 mark, and Murray does the javelin. Erickson collected four golds at the April 29 Goldsmith Relays in WaKeeney, one of the larger regular season meets in northwest Kansas. Tanner Jackson, Mark Bricker and Terry Ream serve as Oberlin’s coaches. Erickson

Erickson is a noted singer and was selected for the Kansas Choral Directors’ Association treble honor choir four of a possible five years. The choir has around 230 singers and consists of fifth through ninth grade students.