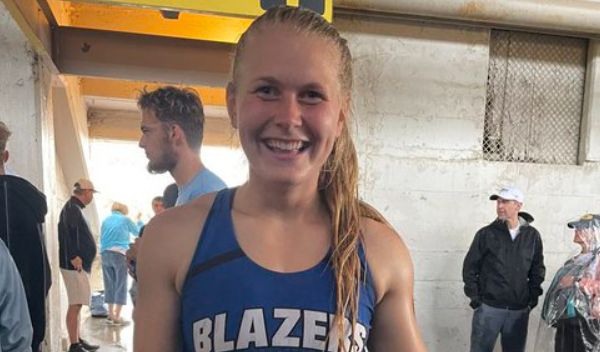 Gardner-Edgerton senior Kendra Wait had enjoyed an exceptional first two track seasons. As a freshman, Wait was third in pole vault, fifth in the 200-meter dash and won the 100 meter state title. Her sophomore year, Wait added the shot put. Wait captured titles in the 100 and shot, took second in the pole vault and fourth in the 200.

On Feb. 28, I talked with Wait, a former Kansas Gatorade Player of the Year in volleyball and track, on a wide range of topics. Wait’s dad, Darrell, high jumped at Kansas State. Her older brother, Kyle, won a state title and pole vaulted for KSU. Kendra’s sister, Cassie, is one of the great all-around recent athletes in Kansas prep history. Cassie won three pole vault titles and had a stellar career as KU’s libero.

“Really (pole vault) just started with my brother,” Kendra said. “He just started doing it. He randomly found that he liked that more than high jump, which my father did. And then that just kind of made my sister go into it, and then she found a lot of success into it, so I felt like it was just kind of my natural way of getting into track was to just start with pole vault and see where it went from there – and I liked it, and I just continued to do it.”

2020 track was cancelled because of the pandemic. Wait said she most missed the potential opportunity to try new events.

“I think just the possibility to continue to add more on,” Wait said. “I know we were kind of starting to talk about hurdles a little bit and adding on some more events and just trying to see what else I could do. And so I think just that possibility of extending everything and just seeing what else outside of my realm of what I already do.”

This season marked Wait’s last chance to increase her rare repertoire. She has never wavered to her Creighton volleyball commitment.

“Now I only have one more year and that would be the end of my track career,” Wait said. “…Right now, my plan is just to do shot put, pole vault, and then 100 and 200. And then maybe a relay if we decide to throw one together.”

However, Wait picked up the long jump on a cold April 17 meet – and broke the school mark at 18 feet, 4.25 inches on her first attempt. At the Sunflower League meet two weeks before state, Wait won all four conference titles in the 100, pole vault, shot put and long jump. She broke her own school records in the shot put (43 feet, 10.5 inches) and long jump (18-7).

Two weeks later, Wait etched her name forever into the Kansas history books at the Class 6A state championship at Wichita State University’s Cessna Stadium. Last Thursday, Wait capped her career with several feats never seen before in 100-plus years of state track.

Wait captured the 100 dash in 12.23 seconds, .01 seconds ahead of Olathe North sophomore Ka’Liyah McGinnis. She won the pole vault with an 11-foot clearance, her day’s lone attempt.

Cassie still holds the 5A state mark at 13-2, set in 2013. Wait won the long jump with an 18-5 leap; she passed on her final four attempts because of other events. Wait captured the shot put by nearly two feet with a mark of 41-2.5.

Historically state track is spread out over two days, but Wait accomplished all the golds in one day. She is also the first 6A athlete to ever win four golds.

Multiple coaches/media members/fans asked on Twitter if Wait was Kansas’ best athlete (boy or girl) and/or the best track athlete ever. On Tuesday, SIK reached out to esteemed longtime historian Carol Swenson for context.

Swenson noted Wait was the first boy or girl athlete ever to win the combination of the 100, pole vault, long jump and shot put at state. Wait is also the only girl ever – and just the second individual to have a shot put gold among four golds at a single meet.

The other individual was Hutchinson’s Solomon Butler in 1913 – when he won the 50-yard and 100-yard, 220-yard low hurdles and shot put. In three years, Wait finished with seven golds.

Twenty-nine girl athletes have won at least eight career gold medals at state track, paced by Claflin’s Jackie Stiles with 14. Because of the pandemic, Wait finished her career with seven golds in 11 career individual events, a 63.6 winning percentage, one of the state’s highest all-time marks.

Wait’s historic day highlighted the three-day track meet. Classes 5/6A occurred Thursday, 3/4A on Friday and 1/2A on Saturday. On Tuesday, Swenson released his final statewide leaderboard. Wait cleared 13 feet in the pole vault, which ranks sixth all-time and third-best for all classes this season. Her 18-7 long jump was fourth-best for all classes. Wait was second in the shot put for all classes.

G-E weights coach Mark Simoneau, a former Smith Center, K-State and NFL standout, noted via Twitter that “Kendra has set the highest standard with her work ethic and approach to her preparation.” A 4.0 student, Wait can back squat 330 pounds, clean 200 and has 32-inch vertical jump, which are uber-talented numbers. Kendra and Cassie, now a lawyer in the Kansas City area, have always been close. Kendra has long looked up to her sister, a NCAA Woman of the Year nominee with the Jayhawks.

“There are no words that speak to the breadth of this accomplishment,” Cassie wrote on Twitter. “She exudes grit, humility and is truly the fiercest competitor I know. Proud is an understatement.”

Wait scored 40 points and helped G-E tally 56 for a third-place tie and the final team plaque.

Kiowa County girls won 1A, and Stanton County was 2A runner-up to Garden Plain.  Kiowa County and GP also won state in ’19.

Fairchilds, Yungeberg with huge days in the throws

Additionally, Andale girls rolled to the 4A championship with 137.5 points, 67.5 ahead of runner-up Paola. Senior Katelyn Fairchild, a Texas A&M signee, won the shot put with a throw of 42-2.5. Her sister, sophomore McKenzie, took second at 40-6.

In the discus, the sisters flipped. McKenzie won with a 140-foot toss, and Katelyn took second at 132-10. In the javelin, Katelyn, McKenzie and their cousin, senior Samantha Marx, went 1-2-3 in the javelin.

Katelyn had posted a season-high 175-4 mark at regionals, second-best all-time in state annals. She threw 170 feet at state, which broke the 4A mark set in 2008 by Tonganoxie’s Roxi Grizzel at 165-5.

In 2A, Valley Heights junior Emma Yungeberg won the shot put (40-11), captured the javelin (144 feet) took second in the discus (126-10). Katelyn Fairchild’s and Yungeberg’s 1-1-2 throwing finishes are among the best in Kansas history.

In 2A, Sterling senior Tyus Wilson captured his third high jump title and broke the 2A state record. Wilson has cleared 7-3, third-best all-time in state history. A Nebraska commit, Wilson cleared 7-2 and broke the mark of 7-0.25 set by Hoxie’s Travis Baker in 1999.

In 5A, Mill Valley senior Lily Fleetwood won the pole vault with a 13-foot clearance. That broke the school record of 12-9 set in 2015 by Blue Valley West’s Christina LeMunyon.

In 6A, Olathe North freshman Anjali Hocker Singh and Blue Valley Northwest senior Riley Beach finished 1-2 in state cross country last fall. They went back and forth at state track. In the 1,600, Beach won in 4:59.33 by .07 seconds over Singh. In the 3,200, Singh posted 10:33.91, while Beach was second. Singh posted 2:19.23 and was second place in the 800 by .01 seconds behind Shawnee Mission East junior Grace Meyer.

In the 100, Smith edged Kanak 10.52 to 10.58. Smith is a former AAU national champion, and Kanak has 20-plus Power 5 offers, including defending national champion Alabama and powerhouse Clemson. Smith nearly beat the 5A long-standing record of 10.50 set in 1981 by Independence’s Danny Williams.

Madison junior Casey Helm won the 1A shot put in 55-4 and the discus in 164-10. Helm is looking to be one of the better 8-man football players in the state this season and was one of the best throwers in the state regardless of class this year. Madison and Hamilton (above) co-op for sports until track regionals and easily would've won state if combined w/ Buettner points.

Riley Vandever captured the 800 and 1600 meter titles in Class 6A for Olathe South. Earlier this season Vandiver set the 1600 meter record at the prestigous SM North Relays.

Meade senior Vance Shewey won the 1A high jump in 6-10 and nearly tied the 2A record of 7-0 that had stood since Glasco’s Shane Levy in 1994.

Girard had a really good showing in 3A. Cormick Logue finished with a 3A state title in the 3200 meters and took runner up in the 1600. Teammate Aidam Damman also won the 400 meter dash while Gabe Muia second in the triple jump while Gavin Doubrava took second in the 800. Girard took second as a team in 3A their highest finish in state. Girls team member Gracie Peterson also had a second place long jump finish.

Elijah Mosley of Wichita Heights was your 6A state chamion in the 200 and 400 meters after winning a 400 title and relay at the last meet in 2019.

There were four athletes who enjoyed great success in two spring sports.

Last Friday, she also helped the Bearcats to a state runner-up in softball to Pittsburg Colgan.

Thomas More Prep-Marian junior Jace Wentling completed a highly impressive four-sport school year. In the fall, he was TMP’s top receiver and kicker and helped the Monarchs enjoy its best season since 2002. In basketball, Wentling was a key player for TMP’s 3A Final Four team. In baseball, Wentling was by far TMP’s leading hitter with a .500 average for a 12-11 squad. Wentling was easily the Monarchs’ most experienced returning player for a team that collectively hit .281.

In track, Wentling was seeded eighth after he jumped 20-7.75 at regionals. In one of Kansas’ biggest upsets, Wentling surprisingly went 23-5.5 to win the 3A long jump, which finished as the No. 5-longest jump in Kansas. He took third in the triple jump. Wentling and TMP’s Kade Harris are expected to be one of state’s best 1-2 duo next fall.

Doniphan West sophomore Chloe Clevenger completed her well-publicized baseball/track double. Clevenger was all-state in three sports and had three top-5 team showings, including back-to-back cross country titles. Clevenger took fourth in the 3,200 run and sixth in the 1,600 relay. She ran on the 3,200 relay that won in 10:15.84. Clevenger will transfer to McPherson. Her teammate, junior Elle Williams, captured the 800 in 2:22.85.

De Soto senior Jackson Miller competed in the 5A baseball tournament and the 5A track meet last Thursday. Miller took fourth in the 100 in 10.83 and helped the 1,600 relay win in 43.46.