Carrie Roe had a huge senior year for Herington. 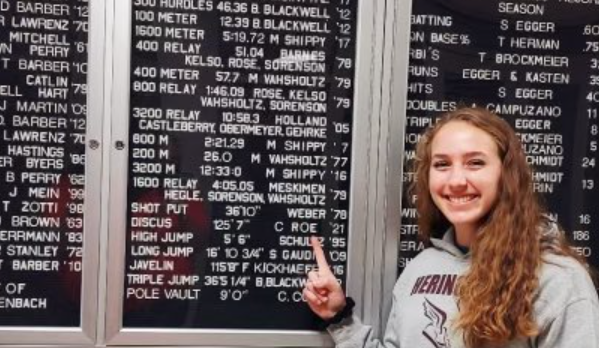 Senior Carrie Roe has loved growing up in Herington. The Roes are a fifth generation Herington family, and her maternal grandparents have owned farmland for more than 100 years. Carrie is the youngest of four children for Tammie and Kenny Roe.

Carrie has always been vocal that the small town has afforded her many opportunities, both academically and athletically. Perhaps no Kansas student in Class of 2021 took advantage of this more than Roe, a 4.0 student and Butler County Community College volleyball signing.

Pick any aspect of Roe’s high school career, and it’s full of accolades. In athletics, Roe holds at least one school record in volleyball, basketball and track. She is by far the school’s career leader in kills and has basketball’s single season field goal percentage mark.

Roe was a three-time honorable mention all-state selection by the Kansas volleyball coaches. For basketball, she cleared 1,000 career points and earned first team all-state from the coaches and Sports In Kansas this winter.

A 2A Player of the Year finalist and top-three all-time in Herington scoring, the 5-foot-9 Roe is one of four players from her classification to earn a spot on the statewide KBCA all-star game roster, held June 19 in Salina.

“I have always wanted to kind of be a three-sport record breaker, so I am glad I had the opportunity to do that,” Roe said to SIK this spring.

Roe knew she just needed one throw of 120 feet. Her dad told her to relax, and Roe said “everything was good” on the attempt. On the toss, Roe thought it was “kind of soaring” and hoped it would land inbounds since it was close to the sector line. She ran out, checked the marker and believed she cleared the record.

“That was special,” Roe said.

Later, Herington took second in May 13 Wheat State League meet with 94 points, five behind of McPherson-Elyria Christian. Roe finished second in the shot put with a throw of 34-10.25. She won the javelin with a toss of 110-7, and captured the discus with a throw of 122-6. The discus set a new league record.

Valley Heights junior Emma Yungeberg won regional titles in all three throwing events. Three Herington athletes qualified for state track, held last weekend at Wichita State University’s Cessna Stadium. Roe was the only Railer to qualify in more than one event. Yungeberg and Roe were among highly rare girl throwers to reach state in all three events. As a sophomore, Roe qualified in shot put and discus.

Entering state, Roe had the fourth-best throw in 2A – and No. 11 for all classes, per Kansas historian Carol Swenson. Class 2A had the best field in girls’ discus with four of the top-11 and five of the state’s leading 13 throws.

At state, Roe narrowly missed the podium with a top-eight finish. She was 11th in the shot put at 33-3 and ninth in the javelin with a throw of 105-11.

Yungeberg was first in the shot put and javelin and second in the discus. Staab won the discus. In discus, her final event, Roe was ninth with a throw of 110-10.

Roe’s discus throw would have been fourth in 1A, fifth in 6A, sixth in 4A and placed top-eight in 3A and 5A.

Roe’s academic side was highly impressive. She was involved in many activities, including FCCLA, FFA, Student Council, National Honor’s Society, Scholar’s Bowl and Forensics. Roe was part of Herington’s drama club and likes to play the ukele and piano. She served as class president and FCCLA president. She and classmate Corbyn Jackson were Herington’s KSHSAA Citizenship award winners. Roe said she “kind of thrived in” FCCLA and is focused on her long term plans.

“I will be going into business education,” Roe said. “And I then I am hoping to teach and coach for a few years before doing my masters in educational leadership and becoming a high school administrator.”

In mid-May, Roe, Herington’s Homecoming Queen, picked up more than a half-dozen scholarships at Herington graduation. Roe was one of only 16 players earn a Kansas Basketball Coaches Association scholarship. Of the KBCA honors, Roe earned the LaVetta Loring Memorial Scholarship, which is given to one girls’ basketball player in Kansas a year.

Roe was one of four in all of Kansas to earn the Kansas Association of Collegiate Registrars and Admission s Officers (KACRO) scholarship.

“I've loved every moment of growing up in Herington because of the many opportunities I've had available to me,” Roe wrote in her KACRO scholarship application.

Roe was one of four Herington seniors to collect a Butler County Community College scholarship and picked up the Dedicated Railer Award as a letterwinner in all three sports. Plus, Roe earned four other named scholarships (Helen Koepke, Hellene Boeling, Eddlene Mae Siegle, Greg Trapp Memorial).

On Feb. 23, Roe and Beloit’s Avery Johnson were the two winners of the Rural Voices Youth scholarship, sponsored by the North Central Regional Planning Commission. Roe wrote a 1,225-word paper that is available on the ncrpc.org web site. Roe provides detailed analysis for the theme “Rural Kansas…Tomorrow’s Possibilities.”

In the paper, Roe cites the “endless number of opportunities” that are available in a small town, including childhood and high school activities. Roe also mentions Herington’s poverty rate.

“Many residents are born in the vicious cycle of poverty and aren’t quite sure how to work their way out of it,” Roe wrote. “Citizens of smaller communities are in desperate need of a breath of new life, and here’s how to create it.”

“By 2030, I hope and pray for a thriving agricultural economy with happy residents and friendships that will last a lifetime,” Roe wrote. “I strive for rural Kansas to have prospering businesses that fill the main streets and for poverty rates to be near zero. I am excited for the opportunity to raise my future children in a town similar to my own, so they can also experience the wonders of rural Kansas.”

Lisa Beye, Herington’s head volleyball coach and business instructor, served as a big support for Roe and helped her with improved thinking. In 2019, Herington volleyball had to replace seven seniors, and Roe was the only returning starter. Herington had to shuffle scheme and personnel.

“She just really taught us like the power of perseverance and positivity,” Roe said. “You can get through anything if you set your mind to it.”

Roe finished her last three seasons with 1,213 kills, 1,199 digs and a .402 attack percentage. That included a .477 mark this fall, which ranked third in Kansas, per MaxPreps. Remarkably, Roe committed just 41 errors, by far the state’s lowest mark among the top hitters.

“Carrie is the type of player I refer to as an X factor,” longtime successful Goessel coach Crysta Guhr emailed to SIK. “Teams with X factors typically succeed.  She makes rally-ending plays. Her ability to terminate the ball consistently was exceptional against most teams.  And she'll be remembered mostly for that ability to terminate play with her hitting.”

Roe had significant defensive improvements. She delivered 4.4 digs as a sophomore and improved to 5.9 as a junior and 5.3 last fall. Herington captured the Wheat State League title in 2020 with two seniors and seven juniors and rearranged its lineup in mid-October when Madi Becker broke her pinkie.

“Surprisingly, as a sophomore, she stood out as a hitter, but mostly what I remember is how she moved in the backrow,” Guhr wrote. “She was efficient and was able to set their entire team up for success with her passing ability.  I learned very quickly that we didn't want to serve in her direction.  So I think her all-around, complete game is something to be recognized. Carrie very clearly carried the team on her shoulders.”

In basketball, Herington had a late start from COVID-19, and Roe delivered 19 points and seven rebounds a game. Herington finished 10-7 with just nine players on the roster. The five starters – Roe, and senior Karli Brott and juniors Halle Rutschman, Tristyn Kremeier and Madi Becker – all averaged between 28.2 and 30.6 minutes a contest. Roe shot 53 percent from the field.

Roe said Herington tried to do as much scrimmaging as possible, with plenty of conditioning. With only nine players, Herington’s coach frequently had to scrimmage and coach together.

Roe was the leading vote-getter for Wheat State League basketball. Kremeier was first team all-league, and Rutschman was honorable mention.

“Most of all, we pretty much just had to be in very good shape, because with only nine players on the team, we knew that we would have to play practically the whole game,” Roe said. “And there were many games where we didn’t get any breaks at all, we didn’t get subbed out. So we just knew that we had to take care of our bodies and minds so that we were tough enough mentally and physically to make it through the whole game.”

Beye helped Roe with elevating her talent. Roe immediately fell in love with volleyball since she started in sixth grade. Then, Beye told Roe of her potential.

“She was really like, ‘You can be pretty dang good, you’ve just got to work for it,’” Roe said. “So just was really my motivation throughout high school and even during the recruiting process, because obviously that is a stressful time for everyone. She just always supported me and my decisions and helped me became a better player and person as well.”

Roe played club volleyball since seventh grade. Early on, she was a rare small-school player with club out of Junction City. Between sophomore/junior year, Roe realized that she wanted to play college volleyball and upped her work ethic. She learned nuances of hitting, which has helped against tallier blockers.

“Given my height, I really had to work on my vertical and my explosiveness...,” Roe said. “Had to be mindful of where I was on the court, where their weaker players are and just know where I am at and who I am hitting against is really important. I just really tried to gain more knowledge in volleyball as a whole, so I could figure out what I needed to do to get around the taller players.”

Butler had long shown interest in Roe, but because of COVID, she couldn’t visit. She eventually committed on April 8, one of many ceremonies, records, and awards Roe has earned in the last two months to cap one of the most impressive careers in the 2020-21 class.