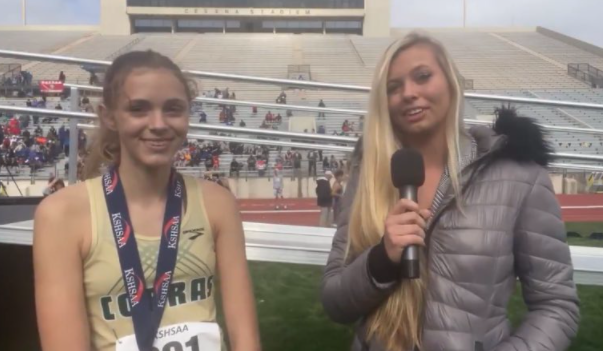 Then, Olberding, in her first year of high school track after COVID-19 cancelled last spring, was playing two-hand touch football in P.E. class about four weeks ago. She caught a pass and was hit from behind. Olberding broke bones in her forearm and thought her track season could be over.

Olberding missed three weeks and notably did not compete at the Northeast Kansas League meet. She returned for the Class 1A Burlington regional and qualified in the triple jump and 200-meter dash.

On Saturday, Olberding wore a brace on her left hand and won the state triple jump title in her sixth and final attempt at Wichita State University’s Cessna Stadium. Olberding jumped 35-6 on her final attempt and edged Randolph-Blue Valley sophomore Landry Zoeller by a quarter inch. Before the jump, Olberding had a top mark of 34-10.75 at state.

Olberding broke her own school record from earlier in the season.

She was seeded seventh entering state after a jump of 33-7.75 at regionals and was behind Zoeller at regional. Zoeller had the best jump in 1A this season at 36-6.

“A lot of excitement,” Olberding told Sports In Kansas’ Bethany Bowman at state Saturday. “It was amazing.”

Academically, Olberding was one of three sophomores and 11 at Jackson Heights to earn a 4.0 GPA this school year. Olberding also plays for high-level Lady Prospects basketball.

Olberding became the first Jackson Heights’ state champion since Faith Little captured the 800 and 1,600 in 2016, the only Jackson Heights girls’ titles since 2000. In 1999, Jessica Bowser won the 100 and 300 hurdle crowns, per KSHSAA archives.

On the boys’ side, Jackson Heights’ last champion was Cory Keehn won the 1,600 run in Class 2A in 2011. Keehn went on to a high-profile career at Fort Hays State University where he won an individual MIAA cross country title and helped the Tigers to a cross country conference team crown.

Keehn, who earned All-American honors in cross country and track, qualified for the 2016 Olympic Trials Marathon and is currently on staff for Division I Appalachian State (N.C). Before him, Andy Schmitz won the triple jump in ’05 and ’06.

Jackson Heights is traditionally a Class 2A school and moved to 1A this season.

Wamego, a four-year starting lineman and first team all-state football player for JH, broke Jackson Heights’ shot put record earlier this spring with a throw of 51-10. The previous mark was 49-11 set by Steve Pittenger in 1972.

Olberding enjoyed a standout sophomore year in all three sports. In volleyball, Olberding helped Jackson Heights post a 21-8 season. JH wasn’t able to finish the year because of COVID-19 hurdles. She paced the Cobras with 182 kills, was second with 233 digs and was honorable mention all-league. In basketball, Olberding earned all-league honorable mention honors. That included six treys against Oskaloosa.

Junior Elle Williams won the 800 title in 2:22.85. Sophomore Chloe Clevenger, in her last meet before she moves to McPherson, was fourth in the 3,200 run in 12:14.61. Claire Cole earned fifth in the 1A high jump with a five-foot clearance.

Horton junior Maliyah Soto took second in the Class 2A long jump with a 16-9 jump. This marked Horton girls’ best finish at state track since Leah Murata was 3A state runner-up in the 1,600 in 2012, per KSHSAA.

Before then, Horton’s top finisher was Lachelle Hartley, who won the Class 3A discus and javelin titles in 1990.