v American Implement Team of the Week: Satanta track - Sports in Kansas 
Warning: include(../includes/bodytag.php): failed to open stream: No such file or directory in /home/kansass/public_html/ks/news/index.php on line 36 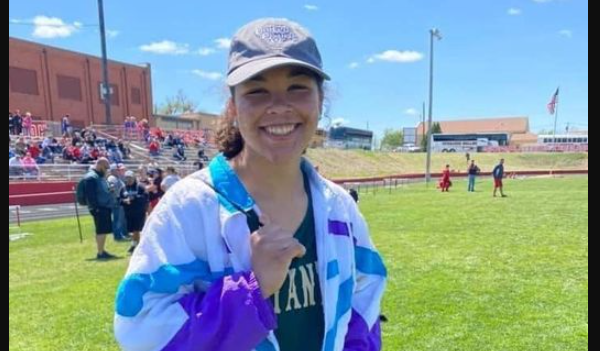 Satanta senior Sicely Jackson capped arguably the best track career in Indian history on Saturday at the Class 1A track and field championship at Wichita State University’s Cessna Stadium. As well, Jackson and other Southern Plains Iroquois athletes enjoyed a standout performance at state, especially on the girls’ side with Kiowa County, Hodgeman County and Ingalls.

Jackson collected one second place and two thirds at state to finish her career with eight individual state track medals after 2020 was cancelled from the pandemic.

Satanta and Ingalls both tallied 20 points and tied for 12th in Class 1A. Jackson and Ingalls’ Regan Ast scored all the points for her squads. In the team standings, Kiowa County rolled to the championship, and Hodgeman County took second.

Jackson’s 400 time would have won the 3A title by more than a second and by 2A by two-plus seconds.

Earlier this season, Jackson posted 17 feet, 3 inches in the long jump, and then broke the school record of 17-5.5 at the Dighton Invitational. Jackson beat her own school mark in the 400-meter dash when she ran 58.91 at the Hodgeman County meet.

At regionals, Jackson posted 58.44 seconds in the 400, which broke her own school record. She finished second in the premier race to Kiowa County junior Addi Heinson.

Satanta had never won an individual boys or girls running event at the state meet, though Jackson came very close this year.

In ’04, Jayme Dunn won the boys’ shot put, which was the last time an Indian boy captured a state track title. Kyle Merz also captured the javelin in ’01 and ’02. Mary Cortez earned the shot put title in ’90 and ’92, which are the last Satanta girls’ individual track titles.

In the 200 prelims, Jackson qualified first for the finals with 26.25 seconds, .03 ahead of Heinson. In the finals, Heinson won in 25.62 seconds, while Jackson took second in 26.05. The performance helped Heinson earn four gold medals as Kiowa County won 1A.

Hodgeman County took runner-up. Both teams were featured on SIK several times in the last couple months. Many of the HC girls helped the Longhorns to a final four finish in girls’ basketball, the best season in program history.

Kiowa County was first in 64 points and won its second straight title after a 2019 title. HC took second with 35 points, while teams second through seventh scored 31 to 35 points. Beloit-St. John’s and Oberlin-Decatur Community tied with 34 points.

BSJ senior Lauryn Dubbert completed her outstanding three-sport career. A two-time first team all-state basketball player and Newman basketball signing, Dubbert won the javelin in 132-11, was second in the pole vault at 10 feet, fourth in the 300 hurdles at 47.87 and sixth in the 100 hurdles with 16.54.