v 1A Girls: Heinson looks to break longtime sprint mark - Sports in Kansas 
Warning: include(../includes/bodytag.php): failed to open stream: No such file or directory in /home/kansass/public_html/ks/news/index.php on line 36

Kiowa County looks to repeat as 1A girls' champion 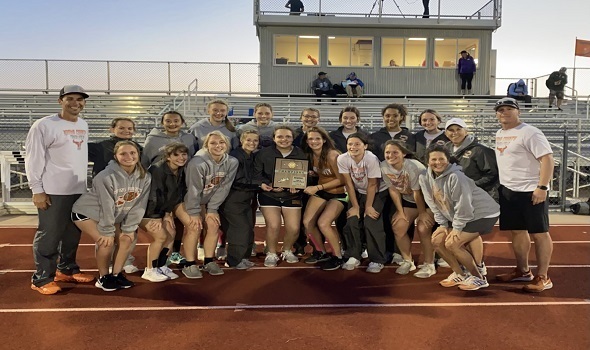 For the 400, Heinson was .85 seconds faster than Jackson at regional. At state, Jackson delivered 59.68 seconds for third, and Heinson was fourth in 1:00.57. Heinson ran on KC’s 400-meter relay that earned gold, and the Mavericks collected the overall team title.

That marked the last time Heinson and Jackson ran the 400 against each other until the Kiowa County regional on May 20.

Last spring was cancelled because of the pandemic. This year, Heinson battled a hip injury and didn’t run the 400 for several meets. Satanta used Jackson in multiple events during the spring. They were supposed to run against each other the week prior at league, but Jackson scratched the 400.

At regional, Heinson versus Jackson became a must-watch event in the 400.

Both runners broke her own school records.

Heinson posted 57.71 seconds and Jackson was second in 58.44. They each ran into a headwind on the final stretch. Among 1A girls, only standout Oberlin freshman Rayne Erickson (58.91) ran under 61 seconds at regionals. All three rank in the top-10 for all classes.

Heinson also won the 100 in 12.06 seconds, seven-hundredths off her school mark. She posted 26.69 seconds to capture the 200. The 1,600 relay, with Heinson, won in 4:14.11. Kiowa County took the regional team title. All four marks are ranked first entering the 1A track meet Saturday at Wichita State University’s Cessna Stadium.

This marks the third and final day of competition with 1A/2A on Saturday. The first two days on the track were headlined on the girls by 6A Gardner-Edgerton’s Kendra Wait, 5A Olathe West’s Kennedi Cline and 3A Smoky Valley’s Belle Peters. The trio all ran at least one sprint event.

On Saturday, Heinson receives a final matchup with Jackson – and could show she is Kansas’ fastest girl, a rare achievement at the 1A level.

Additionally, Heinson could break (and possibly shatter) 1A state marks in all three sprint events. KC, with 10 straight league titles, is expected to battle with Doniphan West and Lincoln for the state team crown.

For 1A girls, the state sprint records have stood for several decades. The 100 mark is most in jeopardy. That is 12.30 seconds set by Logan’s Kelly Pakkebier and Grinnell’s Beverly Heier in 1985 and ’83, respectively.

“Just confidence and trusting in herself has been huge this year,” Powell said.

Powell is the lone head track coach in Kiowa County school history. In March at the team meeting, Powell “got a little emotional” when spring sports came back from the pandemic.

“We have been super blessed with great sprinters, fast girls,” Powell said.

Heinson has become the best sprinter in school history. She ran 59 seconds in the 400 in seventh grade.

“She has been on everybody’s radar in this area since then,” Powell said.

As a freshman, Heinson ran 12.18 seconds in the 100 at regional and 12.53 at state. She delivered 25.94 in the 200 final for the school record. KC was loaded last year, and Powell had strongly considered not running Heinson in the 400 at all and instead using her in the 400 relay. COVID thwarted any plans.

This year, Kiowa County graduated Sabrina Thomas and Kellie Rhodes, and Heinson was going to run in the 100, 200, 400 and 1,600 relay. Powell said Heinson “kind of grew” into the 400 “a little bit” this spring and gained confidence.

“Kids are kids, and sometimes they just have to go through the experience, and then ‘OK I can do this’ and everything settles down,” Powell said.

Since both marks were hand-timed rather than fully automatic (FAT), an adjustment of plus-0.24 seconds was required. Powell told Heinson to take the sub-12 time “with a grain of salt.” KC made the time adjustment to 25.84 in the 200, which set a new school mark.

“Her competitiveness,” Powell said. “I mean, it was there, but sometimes as a freshman, you are just not real sure. Her mindset, I think is different to where it’s like ‘I am going to do this. Here is what we are going to go do.’ … Just confidence and trusting in herself has been huge this year.”

At the May 14 league meet, Heinson set her school mark when she posted 11.99 FAT in the 100. She had a slight tailwind. Heinson nearly matched that mark at regional.

“I kind of tell my kids that we don’t necessarily have to be the first ones out of the blocks,” Powell said of the 100. “It’s not important to be winning at 10 or 15 meters. We really stress power out of the blocks and pushing as long as we can. And that’s kind of where we gain with her. There will be times where there’s been a few races where she is probably in third or fourth 15-20 meters in, but she is pushed a little bit longer, and then once she gets rolling, she is fast.”

Powell has long focused on just the meet coming up. KC especially stresses the league meet. For regionals, Powell tells his athletes to hone more on state qualification, and then the regional points will take care of itself. This year, Ingalls, led by Regan Ast, surprised Powell with a regional runner-up showing.

On May 21, Powell talked with his team about state. He mentioned Doniphan West, known for its distance runners and featured on SIK earlier this season, is “really strong.” He didn’t want to put any pressure on his team.

“We have got to go and perform where we are expected to perform,” Powell said.

Assistant coach Matt Hoffman calls Little “the silent assassin.” Little also qualified tied eighth in the pole vault at 8-9. Little runs on the shorter relays. Addison Sherer and Charleigh Friesen are key on the relays, too.

Junior Emma Thompson is seeded seventh in the discus at 104-8, and sophomore Liberty Gilkey is eighth in the triple jump at 33-5. Kiowa County boys qualified the 400 relay, and junior Bo West is seeded fifth in the the discus at 136-11. In the pole vault, senior Luke Ballard is seeded second at 14-3, a school record.

“She just kind of snuck in, came out of nowhere,” Powell said of Little. “We had no idea about pole vault. She said ‘Hey, I would kind of like to try that, and off we go.’”