v 4A Track: Chapman looks for strong finish, rare top-3 - Sports in Kansas 
Warning: include(../includes/bodytag.php): failed to open stream: No such file or directory in /home/kansass/public_html/ks/news/index.php on line 36 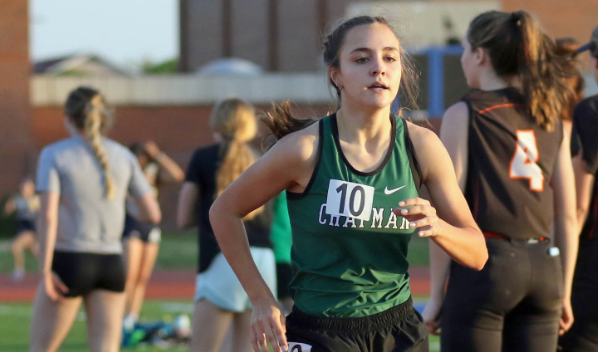 Outside of the Kansas City, Kan. area, Chapman’s athletics likely had the most issues from COVID-19 in the past year. First, like all schools, the Irish did not have a 2020 spring sports season. Distance runner Taylor Briggs and jumper McKenna Kirkpatrick could not defend state titles from a squad that finished in eighth place in Class 4A.

In football, Chapman had two games cancelled and went just 4-3. The Irish were among the teams to play the fewest football games last year. Then, Chapman became just one of a handful of schools to not play winter sports before Christmas break.

Additionally, Chapman girls have limited numbers in the 2021 senior class. Chapman finished 1-16 in girls’ basketball and 3-15 in boys’ basketball. The girls went 0-21 in volleyball. Chapman had zero seniors on volleyball and had just one basketball point from a senior in girls' basketball. Steve Simpson, in his 46th year of coaching, came out of retirement in May 2020 to coach Chapman middle school football and Irish high school track.

Last summer, Simpson saw talent in the weight room that he believed could yield track success. This spring, Chapman boys and girls have finished the school year strong. The girls captured league and regional titles behind Briggs and a host of younger athletes.

Chapman opened the spring with just 14 athletes who had ever competed at a high school meet. Fifty Irish had never competed in high school. The girls scored 142 points at league – 62 more than ’19 – and won conference by 33 points.

Chapman qualified 24 for the state meet, per KSAL. The Irish are expected to have athletes competing from 8 a.m. to 7:22 p.m. on Friday. In addition to Briggs, Chapman is loaded with freshman Elyssa Frieze, sophomores Sophia Cavanaugh and Maya Kirkpatrick and junior Shannon Anderson. Senior Macy Bliss, junior Marie Meuli and freshman Tanith Elliott qualified in the throws.

On Friday, Chapman competes at the Class 4A track and field championships at Wichita State University’s Cessna Stadium. Class 3A/4A will occur Friday after 5A and 6A concluded Thursday. Classes 1A and 2A will finish Saturday. The well-known Briggs, an Iowa State signing, is expected to solidify her place on the Mt. Rushmore of Kansas distance greats.

Lesser known, though, is Chapman girls’ run for a top-three finish and team plaque. This could be the best finish for girls’ squad in Irish history for any sport – ever, per KSHSAA archives.

“There’s a lot of kids – that when they figure out that they are pretty good – they will be pretty good,” Simpson told Sports in Kansas this spring. “And they just had to believe in themselves, and they had to get out and train and learn and maybe get a little mentally and physically tougher. But they’ve sure responded well, and I think they keep finding out things about themselves they didn’t really know they could do.”

“They work really hard,” Simpson said. “And they have been a blessing for me as a coach.”

Chapman has never won a girls’ team championship in any sport, according to multiple sites. While Andale is the heavy 4A girls’ favorite, the Irish have rarely had a top-three showing in any sport.

“This track season is going to help a lot of kids,” Simpson said. “I think it’s going to give them some confidence.”

“The girls have worked really hard,” Simpson said. “The coaches have been doing a good job working with them. I think they are just hungry. Kids didn’t have a season last year, and I just think they are really excited about being out there and working and getting an opportunity to really grow and to improve – and their work ethic has been fantastic.”

Simpson said Frieze was “really good” in the seventh grade. She missed three weeks because of a stress fracture. At regionals, Frieze posted 5:24.80 in the 1,600 and ranks third entering state. She is second in the 800 in 2:24.67.

“She is an intense competitor,” Simpson said. “So she goes out and works really hard, and every time we run a workout, she is on Taylor’s heels, pacing herself. That’s good that she has got somebody like that to set an example and to work with.”

Winder set the school record with a 50.14 in the 400-meter dash. He posted 50.38 at regionals and is seeded second entering state. Erickson, known for his work ethic and leadership, had an all-state football season. He is top-seven in state seeds in the 100 dash, 110 hurdles and 300 hurdles.

Winder has been a distance runner. At Chapman's opening meet, Simpson said Winder ran the 800 and “did all right,” along with fine performances in the long and triple jump. Winder started to run the 400 workouts.

Simpson believed the Smoky Valley meet would be postponed because of weather. He had Winder work hard before the meet. The day before the SV meet was supposed to occur, Chapman ran the 1,600 relay with “rabbits” – other runners with a head start designed to push the relay team.

Winder quickly passed his rabbit and posted around 51.7 seconds.

“With Eli, I told him a couple of times in practice, I said, ‘You train like some of the best kids I have ever trained,’” Simpson said. “I said, ‘You need to trust your training. Don’t ever doubt it.”

Simpson then wanted to put Winder in the open 400. At the Abilene meet, Winder posted the 50.14 seconds the first time he ran the event to break the school record. Winder and Erickson noted the meet was not as hard as some of the practice workouts.

“They have responded so well,” Simpson said.

Sophomores Cavanaugh and Maya Kirkpatrick have qualified in multiple events. The 6-foot, left-handed Cavanaugh is a rising volleyball star for her classification and has played high level club.

Last fall in volleyball, Cavanaugh and Kirkpatrick led Chapman with 124 and 87 kills, respectively. Cavanaugh recorded 41 of her team’s 72 blocks for a nine-player varsity roster with zero seniors. Both players were on a basketball team which had all but one point from non-seniors. Kirkpatrick led 8.3 points a contest.

At regionals, Cavanaugh was second in the high jump and fourth in the triple jump. Her brother, Torin, is a 6-foot-3, 202-pound linebacker who earned several accolades in football last fall. He deadlifted 615 pounds on May 17.

“(Sophia) came out, and was raw,” Simpson said. “Worked at it and has been hungry to do well. The high jump took off right away, and she has also been triple jumping really well. … Got some talent, and doesn’t like to not perform well. She gets mad when she doesn’t do well. We have got a lot of kids like that. Their expectations are high, and they want to work hard to get better.”

Kirkpatrick was third in the long jump and second in the triple, along with third in the 300 hurdles. She comes from an excellent family of athletes. The 5-foot-11 McKenna won the state triple jump for Chapman in ‘19 played volleyball for Colby CC last year.

Their mother, Jennifer, won multiple state titles at Scott City and is a Chapman assistant track coach. Like multiple others, Simpson first complimented Maya’s work ethic. For one midseason practice, Simpson wanted the team to go at medium speed/rest. Maya ran her workout – and then ran some more.

“Maya really gets after it in practice,” Simpson said.

While Briggs and a lesser extent Frieze are essentially solidified in top places, Chapman’s chances for a team plaque will likely come down to Kirkpatrick and Cavanaugh. Kirkpatrick is seeded seventh in the 100 hurdles at 16.29. However, fifth to ninth is separated by .17 seconds. Kirkpatrick is sixth in the 300 hurdles at 48.39. Places five to 11 are within .72 seconds.

Kirkpatrick is No. 13 in the long jump at 15-11.5, though she is capable of top-eight for a medal. Kirkpatrick is sixth in the triple jump at 34-5.25; third seed is three inches better.

Cavanaugh has cleared 5-2 in the high jump; the top-six have all cleared 5-2, none better than 5-4. She is tied for ninth in the triple. Throughout the year, Simpson has not focused on team scores or placings. Instead, he has long derived joy from seeing kids improve and happy with their marks. On Friday, Chapman could end a challenging school year with smiles at the state meet.

“Our kids have done a pretty good job,” Simpson said. “It’s just so nice to be able to have a track season this year – just to be out there and be working with kids and have them working and having a nice track season.”