v Baseball/Softball in KS: Looking at individual standouts - Sports in Kansas 
Warning: include(../includes/bodytag.php): failed to open stream: No such file or directory in /home/kansass/public_html/ks/news/index.php on line 36

Raleigh Kramer went over 100Ks on the year for Ell-Saline. 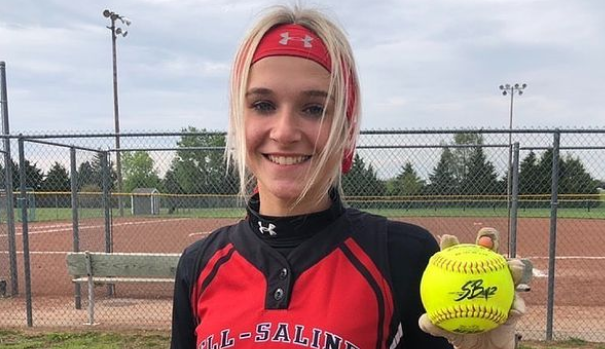 By CONOR NICHOLL for Sports in Kansas w/ Chet Kuplen

Later this week, SIK will have regional breakdowns for baseball and softball. Below looks at individual and team standout performances in the last 10 days. This includes key showings from well-known players such as Hays High’s Dylan Dreiling, Sedgwick’s Nolan Crumrine, Clay Center’s Clara Edwards and Haven’s Maguire Estill, along with other records and notables across the state. Regionals open play early next week.

Sedgwick baseball finished 19-1. Nolan Crumrine won his ninth game this year and 20th of his career. He has allowed just two earned runs with 94 strikeouts against five walks. Earlier in May, Austin Harjo pitched a perfect game in a 14-0 win against Russell.

On Tuesday, Blue Valley Southwest captured the Eastern Kansas League softball title with a sweep of Bue Valley West and finished the regular season at 16-4. BVSW is the No. 4 seed in 5A East.

Topeka High softball won the Centennial League title for the first time in school history. Topeka High has several exceptional players, including junior pitcher Nijaree Canady and catcher Zoe Caryl, an Illinois signing. Topeka High is 20-0 with an average score of 13-1. Topeka is the lone 20-0 softball squad in Kansas, per KSHSAA. In 5A, Bishop Carroll is 16-0, and 2-1A, Jayhawk-Linn stands at 19-0.

Haven’s Maguire Estill is one of Kansas’ most well-known players and has signed with Division II Arkansas-Monticello. On Tuesday, Maguire hit a walk-off homer and a grand slam in the second game. Her sister, Sadie, hit her first high school homer. Haven captured its third straight CKL softball title. Haven completed the regular season at 18-2 and leads the Hesston regional by three games.

On Monday, Lawrence Free State’s Tatum Clopton and Sara Roszak enjoyed another big game. Clopton is the reigning Kansas Gatorade Player of the Year and Roszak is a first team all-state selection. Clopton has signed with Oklahoma State, and Roszak with Kansas. Clopton went 2 of 2 with two RBIs, while Roszak finished 2 of 2 with three RBIs, according to Sunflower League Softball Twitter. They hit back-to-back homers. Free State defeated Shawnee Mission East, 17-0. Last Saturday, Roszak and Clopton both hit homers and drove in three runs. Georgia Rea also homered in a 13-3 victory versus Olathe Northwest. As well, last week, Clopton struck out 14 in a four-hit complete game. Roszak finished 3 of 4 with a double and three RBIs.

Free State has won back-to-back 6A state titles and is 16-1 with a lone loss to Washburn Rural.

Gardner-Edgerton senior Emma Crough delivered a walk-off homer in her senior game last Thursday, a 7-6 win versus Shawnee Mission North. G-E’s Harley Pruetting delivered nine RBIs in a doubleheader last Wednesday for 40 this season. That broke the school record of 38 set in 2018. G-E’s Kenna Trout also hit her seventh homer, which tied the school mark from ’18. The Trailblazers are 14-4 and pace 6A East.

Mill Valley’s Ava Bredwell tied the school record for career triples and set the single season record for triples. Bredwell has signed with Nebraska softball. MV is 9-11, though is 1-3 in games decided by two runs or fewer.

In a scheduling quirk, Shawnee Mission North softball played three teams on Friday and won all three: 13-3 against K.C. Turner, 11-0 versus Bishop Ward and 9-3 against Bonner Springs. North finished the regular season with four straight wins and a 5-1 mark in the last six contests. North is 13-7 this season.

Wamego softball finished the spring at 15-5 against a sweep against Chapman, 18-1 and 15-1. Toree Hoobler hit two homers, while Alexis Billings and Ashten Pierson both hit one. Wamego is 15-5 and has averaged 9.3 runs per game.

Baxter Springs’ Riley Bush has enjoyed a huge baseball season. Bush carries a .556 average in 54 at-bats. Bush has nine doubles, two triples, four homers and 35 RBI, along with 19 walks. Bush carries a .692 on-base percentage and a 1.011 slugging percentage. Baxter Springs, with first-year coach Cordaro Baldwin, is 16-3 and swept Galena to win the CNC. In the Galena sweep, Baxter hit four homers, two from Bush, one by Kameron Williamson and another by Kaden Niday. Two of those homers were grand slams. Brandon Kelley, who has committed to Ottawa, has struck out 39 batters with a 5-0 record in 42.1 innings pitched with a 1.98 ERA. He is also hitting .364 with five doubles and 15 RBI. Baxter Springs is 17-3 and headlines the highly competitive Columbus regional where every team is 9-11 or better.

In its first-ever varsity baseball season, Onaga defeated Troy in a doubleheader to become league champs. Onaga is 10-10 and Troy is 4-15.

Olathe East sophomore Izzy Carter finished 4 of 7 with two RBIs in a doubleheader against Olathe South. OE and OS split. Carter was 6 of 6 on chances in the field at shortstop. Carter is a left-handed slapper. South won 2-1, and East won 3-2. OE is 8-11.

Prairie View senior Hunter Minden hit his second homer and has three this year. He has signed with Division II powerhouse Central Missouri. PV has struggled to just one win this season.

MaxPreps recently named the best baseball coach from every state. Pittsburg St. Mary’s-Colgan coach Mike Watt earned the Kansas award. He has won 16 state titles, all since 1993, and was National Coach of the Year in 2016. Colgan is 10-8.

Oskaloosa softball has hit 35 homers this season. Sophia Rockhold has hit 10 for a new single season record. Oskaloosa has hit 56 homers from the group of seniors. Oskaloosa is the 2019 2-1A runner-up to Colgan and is in 3A this spring. The senior group is 59-8 with a pair of state runner-ups. In that stretch, the seniors have a 3.24 ERA and a .437 batting average and 575 runs scored. Oskaloosa stands at 16-4 and headlines the Silver Lake regional, along with host SL (17-3) who just recently beat Oskaloosa.

The top-four hitters are all seniors: Ellie Stember, Reese Curry, Regan Curry and Rockhold. Stember is hitting .544 with 17 doubles. Reese is at .533 with eight doubles and seven triples. Regan has a .521 average with 10 doubles and six triples. Stember has six homers, Reese with seven and Regan with four. Stember is the top pitcher with 66 strikeouts and 23 walks in 54.1 innings. The Currys have signed with Central Arkansas.

Pittsburg Colgan softball is the defending 2-1A state champion from 2019. The Panthers are a strong favorite again this spring. Kaitlin Crossland, the ’19 2-1A Player of the Year, is 15-2 with a 1.84 earned-run average. She has 137 strikeouts in 99 innings. Crossland carries a. 450 average with 11 doubles, three homers and 28 RBI.

Maize sophomore Avery Johnson has Power 5 football offers after standout football and basketball season. Johnson carries a .571 average with 28 hits, along with four doubles, two triples and 11 steals. Maize is 13-6.

Holcomb freshman Korryn Johnson is 15-3 with a 2.63 ERA and 152 strikeouts in 101 innings. Holcomb softball starts five freshmen. Look for more on Holcomb later in the week. The Longhorns are 15-3.

Riley County hit three homers in the third inning of its first game against Marysville: Keigan McNulty, Connor Holle and Ethan Bohnenblust. Holle and McNulty hit back-to-back homers, and Bohneblust hit his later in the inning. Holle hit a homer in the second game of the doubleheader. RC won 16-6 and 5-2 on Senior Night. RC is 13-5.

Topeka Seaman baseball is 17-3 after a 10-2 win on Tuesday at Topeka Hayden.

Class 4A Paola baseball won the Frontier League, stands at 18-2 and is the No. 1 seed in 4A East. It marks the second league championship in school history.

Ell-Saline softball’s Raleigh Kramer notched 100 strikeouts this season in a performance against Bennington. E-S is 17-3.

Hays High baseball won its long-standing tournament, the Western Plains Diamond Classic championship, on Saturday. Sophomore Blake Schmidt threw a no-hitter against Life Prep, per Hays Post. Then, Dylan Dreiling worked a complete game shutout in a 9-0 win versus Manhattan. Dreiling has enjoyed an impressive junior year and has committed to Tennessee. HHS improved to 13-3 after the tournament. Dreiling earned tournament’s Most Outstanding Player honor. HHS had lost, 8-6, to Manhattan in pool play and then defeated Great Bend, 4-3, in eight innings.

Prairie View softball won the Pioneer League this season. They feature Riley Boone who is one of the top players in 3A.

Marion softball goes into regional play with a 18-2 record and won their league.

Jackson Showalter had a big senior night for Wellsville with four of four at the plate with three doubles and a three run home run in sweep over Prairie View.

Pratt Greenbacks baseball finished as CKL champions with an 18-2 record as they head into the regionals as a one seed.

Pittsburg High girls softball went 6-11 two years ago and are now 14-6 and the league champions out of the SEK. Several young players have stepped up to have big years for the Purple Dragons.

Clara Edwards is having an incredible year as she pitched a no-hitter Monday against Concordia to win Clay Center the NCKL Championship. She also went 4 of 4 with three home runs in the game. She later through a perfect game against Riley County. Edwards, also an all-state basketball player, has committed to South Dakota to play softball.