Williams is having a big year for D-West. 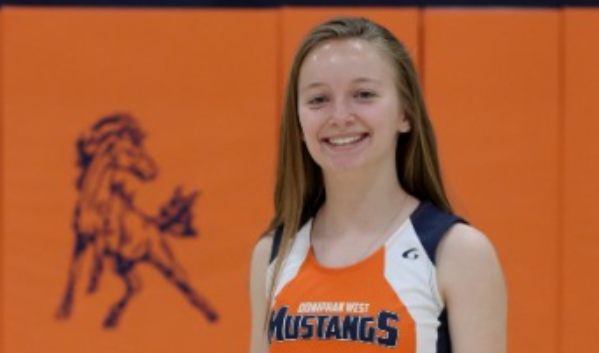 At the league meet, Clevenger won in 20 minutes, 31.00 seconds and set a new school mark. Sophomore teammate Claire Cole took second in 21:22.60. Williams did not compete in the race. Clevenger knew the record would be in jeopardy once Williams returned.

“I got that record having her in mind the whole entire time,” Clevenger said.

At the Lyle Alley Invitational five days later, Williams posted 20:31.25 to win the race, just behind Clevenger’s school record. Clevenger did not compete. On Oct. 24 at the Riley County regional, Lincoln senior Jaycee Vath took first at 20:05, Williams second with 20:32 and Clevenger third with 20:39. They were all at least 57 seconds ahead of the rest of the field.

“She definitely deserves that record,” Clevenger said earlier this spring. “She worked all the time, and she deserves everything she gets. She works so hard, and even her off time is great. She works hard at practice. She works hard in the off time. ... Usually people will get upset if someone beat their record, but I couldn’t have been any more proud of my teammate for getting that record.”

This spring, Williams and Doniphan West has continued to break school records in track. Williams, Clevenger and Cole have helped DW establish as the strong 1A girls’ contender for the state track title. The pandemic cancelled track last spring. At the season-opening Falls City, Neb. meet on March 30, DW set three school records.

Cole broke the school marks in the 100- and 300-meter hurdles. Williams, Clevenger, Cole and sophomore Avery Weathersbee set a new school mark in the 1,600 relay. Cole ran 16.6 seconds in the 100 and 50.9 in the 300. The relay posted 4:32.80. Gina Clevenger, head cross country and assistant track coach, said the group of girls set the relay record in junior high. She “definitely” knew they could break the mark in high school, too.

Since then, DW has continued to set new school marks. Williams ended her freshman track season with 2:31.60 in the 800 at regionals and 2:29.35 at state. She finished eighth in the event at the 1A state meet.

At the recent Doniphan West relays, Williams broke her own DW mark when she posted 2:24.8 in the 800. Williams currently has the fastest 800 time in 1A this year and in the top-15 for all classes, per Kansas historian Carol Swenson’s statewide track honor roll at Sports In Kansas.

Clevenger set a new school record of 12:19.6 in the 3,200. The 400 relay also broke the school record when it ran 55 seconds. That relay had Allie Horner, Malaina Whetstine, Taygen Reno and Avery Weathersbee. On the boys’ side, junior Kole Franken has stepped up to run the hurdles. Cole has also cleared 5-2 in the high jump, which puts her on Swenson's list. Cole is tied for the best jump in 1A.