v Labette Bank Athlete of Month:NE-Arma's Shelby Underwood - Sports in Kansas 
Warning: include(../includes/bodytag.php): failed to open stream: No such file or directory in /home/kansass/public_html/ks/news/index.php on line 36

Shelby Underwood is having a breakout freshman year for Northeast-Arma 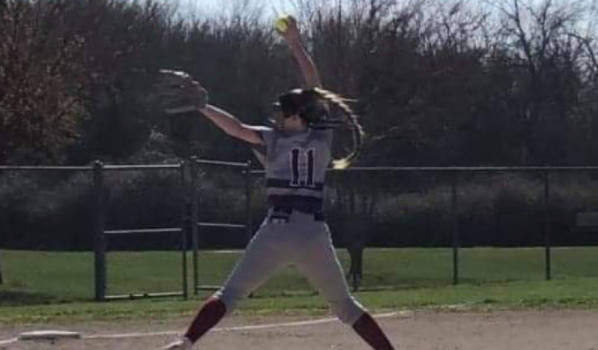 By CONOR NICHOLL for SPorts in Kansas

The Aces Fastpitch softball organization is well-known nationally. The program annually produces Division I players. In ’19-20, the Aces’ 14-and-under squad finished with a 44-16-3 record. It had players from multiple states, including Kansas, Arkansas and Oklahoma.

The ’19-20 team notably featured four Kansans: Shelby Underwood, Adisyn Caryl, Blayze McNemar and Kinsey Clopton, according to the GameChanger roster. Except for Underwood, all three have current senior sisters who have committed to a Power 5 Division I school for softball.

Carl’s sister, Zoe, has committed to Illinois. McNemar’s sibling, Riley, is headed to Auburn. Clopton’s sister, Tatum, is Kansas’ reigning softball Gatorade Player of the Year and has signed with Oklahoma State. The Caryls attend Topeka High, the McNemars go to Galena and the Cloptons are at Lawrence Free State.

All four freshmen have made immediate impacts this spring.

McNemar and Clopton are already ranked in the top-125 nationally for the Class of 2024. Caryl carried a .556 average as of April 19. Topeka High is 16-0 in Class 6A and has the state’s best resume. Free State is 9-1, and Galena is 9-6. Those three teams have a strong softball tradition.

Underwood, though, has already reversed Arma-Northeast’s softball success. NE-Arma has generally struggled in most sports. Softball’s last state appearance was a 1993 state runner-up in Class 3-2-1A, per KSHSAA archives.

From 2011-19, Northeast never won more than 12 games in a season, according to MaxPreps histories. This year, the Vikings are 12-4. In the Class 2-1A Pittsburg-Colgan regional, four teams are over .500.

At the plate, Underwood carries a .421 average (16 of 38). She has five doubles and a team-high five homers. NE-Arma has six homers overall. The Vikings are set to face Oswego in a key doubleheader on Thursday.

This year, NE-Arma lost its season-opening games to Jayhawk-Linn, which is still undefeated at 14-0. Then, the Vikings earned 5-2 and 15-5 wins versus Marmaton-Valley, a 9-5 squad. The Vikings also have quality 8-0 and 16-12 victories against Chetopa, a 7-9 team.

Underwood struck out 11 batters versus Jayhawk-Linn and 14 versus Marmaton Valley. J-L finished fourth and returned six starters from 2019 after the pandemic cancelled last spring.

Underwood had several big contributions to the Aces last summer. On June 21, the Aces completed a 7-0 run and won the 14-and-under Top Gun Synergy Championship. Underwood and teammate Alyssa Parker combined for a 2.10 ERA, a .975 walks plus hits per innings pitched, and 18 strikeouts against three walks. In the championship game, Underwood delivered the walk-off hit on a 3-2 changeup with two outs.

In the fall, Underwood played for the NWA (Northwest Arkansas) Knockouts. They went 6-1 in a mid-October tournament and placed third in a big fall tournament. Underwood paced the team in the circle and hit a key home run. Thus far, she has contributed similarly for Northeast-Arma.