v Craw-Kan Team of the Week: Columbus softball - Sports in Kansas 
Warning: include(../includes/bodytag.php): failed to open stream: No such file or directory in /home/kansass/public_html/ks/news/index.php on line 36 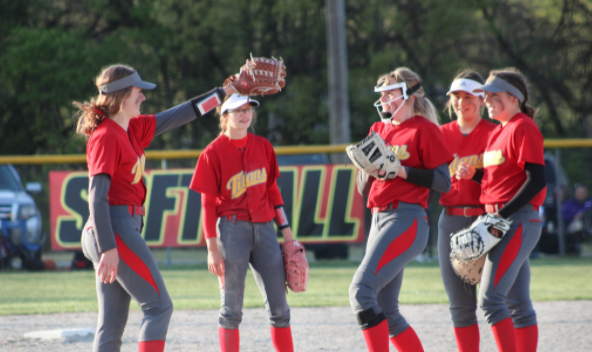 Columbus softball finished 11-10 in 2019 before the pandemic cancelled spring sports last year. This season, the Titans have already delivered several big victories and have surpassed their win total from two seasons ago.

In CNC action Monday, Columbus split with Pittsburg Colgan. The Panthers captured the first game, 11-3, and Columbus won the second one, 11-5. Columbus stands at 12-2 under veteran coach Aimee Saporito. She carried an 84-120 record in the last decade into this season. Colgan, which is the likely 2-1A favorite, is also 12-2 after the Columbus split.

The CNC is long known for excellent softball, including Colgan and Frontenac with state championships in 2-1A and 3A, respectively in ’19. The bulk of the CNC is in the Frontenac regional. Before Monday, Columbus paced the regional with an 11-1 mark, per KSHSAA standings. Baxter Springs was 9-4, followed by Frontenac at 8-4. Girard entered the week 8-6, Galena 7-6 and Caney Valley was 5-5.

Cherryvale and Riverton were under .500 at a combined 4-13. Class 3A has posted strong softball and Frontenac and Burlington regionals are arguably the best. Burlington has every team currently above .500, an impressive feat. Prairie View leads with 6-1, followed by Council Grove at 9-3 and Osage City at 9-4.

Before this season, Columbus was 4-11 in its last 15 games versus Baxter, 1-13 against Labette County and 2-8 versus Galena, according to MaxPreps archives. Columbus opened with a pair of shutout wins versus struggling Parsons. Then, Columbus swept Labette County, 8-6 and 12-4, in games played March 30 and April 1.

Plus, Columbus has standout freshman Kaitlyn Simpson. A switch hitter and leadoff hitter, Simpson is an excellent bunter with great speed. She can play center field and catch. Simpson plays for the 16-and-under Midwest Athletics in the offseason.

Simpson had a key leadoff triple in a win versus Pittsburg and started a key rally to break open a scoreless tie in the first win versus Galena. She homered in the first game versus Colgan on Monday. Against Cherryvale, Simpson posted a 3 of 3 showing with three doubles. Mooney picked up the win against Labette County and worked a shutout against Cherryvale.

Sophomore Aubree Saporito has been stellar in the circle, too. That included 12 strikeouts and two runs allowed versus Galena. She threw a no-hitter and struck out 10 in her first high school appearance, a 20-0 win versus Parsons. Aubree and Simpson were selected for the 12-and-under USA Softball All-American games in 2018.

Columbus’ Addi Saporito has enjoyed a nice school year. Addi posted an excellent wrestling season with a third-place state finish at 109 pounds in Class Division II (4-1A). She finished 29-7. Addi was one of three Titans to qualify for state and the lone one to win a match.