v Chloe Clevenger with rare baseball/track double at DW - Sports in Kansas 
Warning: include(../includes/bodytag.php): failed to open stream: No such file or directory in /home/kansass/public_html/ks/news/index.php on line 36 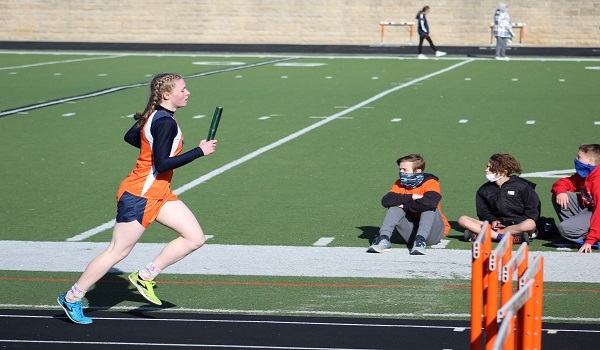 From March 6 to March 30, Highland-Doniphan West sophomore Chloe Clevenger played three varsity sports, broke three school records and helped the girls’ basketball team to the best finish in school annals. In May, she could add at least one more state title before her family relocates to McPherson.

On March 6, Clevenger, the Mustangs’ whirling dervish point guard, paced DW to a 44-33 win against league rival Clifton-Clyde in the Class 1A, Division I sub-state championship game. Doniphan West reached state for the first time ever. Two days later, the Mustangs travelled 237 miles one way to face host Little River in the state quarterfinals. DW pulled away for a 57-44 victory.

On March 8, DW made a 348-mile journey to southwest Kansas and lost, 54-49, to Norwich in the state semifinals at United Wireless Arena. Norwich focused its defense on the 5-foot-6 Clevenger.

“She can drive, so we knew we had to play off and help,” Norwich senior point guard Avery Rosenhagen said.

Clevenger averaged 11.2 points, 4.1 assists and 3.6 steals per game. She broke single season school marks for assists and steals for the 20-4 Mustangs. Clevenger was a SIK finalist for classification player of the year.

Eight days after state, Clevenger stepped onto the baseball field.

DW doesn’t have softball, and Clevenger, like all Kansas athletes, had missed her freshman spring season because of the pandemic. KSHSAA’s Jeremy Holaday confirmed 11 girls played Kansas high school baseball in ’18 and nine in ’19. Holaday said girls can play baseball if softball is not offered at school.

DW played four March games, including a doubleheader sweep versus Onaga on March 29. The next day, Clevenger headed 30 miles to Falls City, Neb. for the season-opening track meet.

Chloe also wrestled at an elite level for many years. Notably in ’15, Clevenger finished as state girls’ runner-up to Pratt’s Jadyn Thompson, now one of Kansas’ best high school wrestlers.

Chloe enjoys all aspects of sports.

As of April 26, Clevenger has performed well in both baseball and track. Clevenger has played in eight baseball games and carries a .385 average (5 of 13). She has scored six runs, walked five times and struck out just three times. On a team with only three seniors, Clevenger has stolen nine bases, fourth-most overall.

In track, DW has established as the top 1A girls’ contender. Williams is the only Mustang who has previously competed at the state track meet. Still, Doniphan West has continued to set a bevy of school marks in track’s return this spring.

“That whole team/family culture that track brings was the biggest thing they missed,” Gina said.

Clevenger has recently set the school mark in the 3,200 run in 12:19.60, which currently ranks first in 1A, per MileSplit. The 400 relay has posted a new school mark in 55 seconds. Williams broke her DW record in the 800 with a time of 2:24.80. Cole has set school marks in the 100- and 300-meter hurdles and cleared 5-2 in the high jump. Last fall, Clevenger briefly held the school cross country record before Williams broke it.

“Our girls’ team is crazy good,” Chloe said. “We have so much talent.”

Additionally, Clevenger has played high-level travel basketball this spring with the Lady Prospects. This past weekend, Clevenger, known for her driving and aggressive play, picked up all-tournament honors at the PGH 17-under Dynasty Classic from Prep Girls Hoops. Clevenger has made basketball her top sport.

She “is making a living getting to the hoop and creating those opps in many ways,” respected PGH scout Robert Kelly wrote. “Showing her speed with ball and athleticism on the finish.”

Originally from Michigan, she remains early in the recruiting process, though has heard from Division IIs in Michigan, NAIA Hastings (Neb.) College, and Division Is Iowa State, New Mexico and KU. Since fifth/sixth grade, Clevenger has worked daily on basketball.

“I fell in love with the game, and I would not be the person I am today without cross country,” Chloe said. “I wouldn’t be able to run up and down that floor without it. Even wrestling, my mentality, my will to win, I wouldn’t be the same without the sports I have done, and I couldn’t be any more grateful.”

However, in a month, Clevenger will leave Doniphan West and move 225 miles to McPherson, a 4/5A school and one of the best five girls’ basketball programs in Kansas history.

The Clevengers have spent the last 11 years in Highland. Chad, her father, has served in various coaching roles with Highland Community College’s cross country and track.

“We start in June, so I have to get down there and automatically get into the basketball mentality to be a Bullpup,” Chloe said.

Gina has had significant talks with McPherson schools for a position within the district along with high school coaching roles with cross country and track.

“It’s like a roller coaster,” Chloe said. “Being able to spread my wings and go somewhere there’s bigger competition. I mean, here in 1A, you don’t have to exactly try out for a team. You show up to practice, and you are kind of on the team.

”But down there in 4A, 5A territory, you have to try out to make a ‘C’ team, a freshman, a JV team, a varsity team, and even if you make varsity, you might not be playing,” she added. “And so I am going somewhere where I can show my talent and be able to prove my talent to make it into that level.”

Chad and Gina Clevenger have three children, including an older son and daughter. They have one grandchild. Chloe is the youngest by eight years. Chad graduated from Ida, Michigan. He had coached at Hillsdale and Grand Valley State, both in Michigan, and Allen County Community College in Kansas. At Highland, Chad had 252 national qualifiers, 52 All-Americans and one national individual champion.

Chad was leading his alma mater in Ida before the family moved to Highland. Chloe started kindergarten in Highland. Notably, she and Weathersbee, a post in basketball, had played together since first grade and have long been close.

At age four, Chloe started wrestling and ran her first mile. She and her older sister wrestled. Each winter, the Clevengers took a weekend family trip to McPherson for wrestling.

“We like the area, we like the community, we like the campus, and we always talked about it, if there’s an opportunity there, we are going to explore that option,” Chad said.

Chad earned his bachelor’s from Grand Valley State. His former GVSU coach contacted Chad about interest in the McPherson job. Chad said “absolutely” and pursued the position. He called the job change a “really good opportunity” for the family. The Clevengers elected to have Chloe and Gina finish out the school year in Highland. That allowed Chloe to reach a longtime basketball goal.

Since fifth/sixth grade, Chloe and Weathersbee had long discussed reaching the state basketball tournament. Both are in the same class. Chloe served as the point guard, Weathersbee in the post.

In summer 2019, Weathersbee and Clevenger played summer basketball together. Chloe stood next to Weathersbee when Weathersbee came down with a rebound. Weathersbee suffered a knee injury and couldn’t play.

“Every night, I go to bed, I still hear that pop, and it was tragic,” Chloe said. “Because I knew automatically that I would not get my freshman season with my post. That was heart breaking, and I would not be the player I am today without learning to do things with Avery.”

In ’19-20, Doniphan West finished 14-11, including 9-3 in league play. Makinley Smith served as a four-year starter and averaged 16.5 points per game as a senior. Clevenger tallied 7.7 points off the bench. This winter, DW lost three times in the regular season, all to Twin Valley League schools, including twice in the midseason conference tournament.

The TVL is perennially the state’s deepest conference for 1A/2A girls’ basketball. DW coach Perry Smith has won more than 200 games and taken a pair of TVL squads to the final four.

Clevenger and Weathersbee both came off the bench for a deep DW squad. Clevenger was first team all-conference, Weathersbee second team.

Clevenger enjoyed coming off the bench for a team that averaged 56 points per game and won 12 straight before Norwich. Eight girls led Doniphan West in scoring during a game this winter. The other key players included seniors Myah Olson, Kinlee Whetstine, Sadie Leach, Heidi Leach and juniors Jaiden Taylor and Sydney Smith. The Mustangs were known for pace and turnover creation.

“That’s kind of how we are predicated on, is our pressure and our transition stuff,” Smith said.

Clevenger led the team in scoring, though wasn’t “too confident in myself” after a 57-55 win against Frankfort in the sub-state semifinal. Then, eighth-year DW boys’ coach David Johnson gave Clevenger advice. He told Clevenger, even if the opponent was a professional, she needed to have the mentality that “you are the best player on the floor.”

Since then, her confidence rose. Clevenger watched more film and made sure she carried herself with great posture. Clevenger and Weathersbee set the tone in the sub-state championship win versus Clifton-Clyde. State quarterfinal games were held at school sites because of coronavirus restrictions. Other than DW’s win at Little River, road teams finished 3-24 in state girls’ quarterfinals.

“I could lead my team, and when they are down, I could be that leader they needed to look to and say, ‘We can actually do this,’ and I think that helped a lot during our Clifton-Clyde game,” Chloe said.

Clevenger played baseball from third to seventh grade, and then had an invite to join a travel softball team.

During state basketball week, Clevenger received confirmation she could play baseball. Clevenger and several track athletes, generally long-distance runners, come at 6 a.m. for track practice. After school, she heads home, completes homework and then goes to baseball at 4:40 p.m. Clevenger played second base and left field early on.

“Being up to bat for baseball is not as challenging for me as it would be if I didn’t play travel softball,” she said. “…Playing softball has really gotten to me that aspect of watching the ball, being ready for any pitch. I mean, baseball velocity is a lot more than softball, but softball spin moves a lot more.”

The day after the March 29 Onaga doubleheader, Clevenger was on the track for her first-ever high school meet. Clevenger needed to overcome baseball from the night prior, along with a tough track workout, and strong wind at the meet. Her 6:04 in the 1,600 still won the meet by more than 19 seconds.

Clevenger has since lowered that to 5:46. Williams and Clevenger are 1-2 in the Class 1A 1,600 rankings, according to MileSplit. Those performances could yield more history for Clevenger in her final season of competition at DW.