Cormick Logue is one of the best in Kansas for Girard HS. (photo: Nathan Hughes) 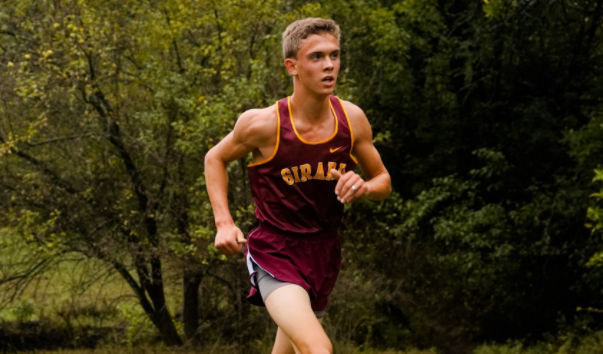 Weather has significantly affected most of Kansas during the last eight days. Last week, Sports In Kansas took a look at the 2019 returning girls’ individual champions and top performers who returned for this spring. This week, SIK heavily focuses on the boys’ side and checks in on the ’19 returning individual champions and top performers. That group includes well-known names such as Manhattan distance runner Daniel Harkin, Lansing sprinter/jumper Malik Benson, Andale pole vaulter Ty McPhail, and Rossville sprinter Woodrow Rezac. Plus, the usual top highlights from the past week, including several all-classes marks from the Abilene meet.

Manhattan won its own meet on April 15. The Indians swept both sides by significant margins. Manhattan boys collected 154 points, while Olathe South was second at 99. Lansing took third with 77.5, and Bishop Miege was fourth at 71.

Daniel Harkin, who has signed with Kansas Wesleyan for running and tennis, is the reigning Gatorade Player of the Year in cross country. He captured the 6A title in the 3,200-meter run in 9 minutes, 30.22 seconds at the ’19 state meet before last year was cancelled from the pandemic.

Jones has the second-best long jump for all classes with a mark of 23-7.5.

Manhattan’s Jaden Magana captured the discus in 169-4, and Moran won the javelin with a throw of 168 feet. Additionally, Darius O’Connell won the shot put with a huge mark of 60 feet, 4 inches. O’Connell has thrown one inch further and has thrown 60-5 this spring, Kansas’ best mark. He has the furthest throw by nearly six feet. Blue Valley’s Ben McAlister ranks second at 54-8.

Lansing senior Malik Benson, who has signed with Hutchinson Community College football after a big fall as a wide receiver, has enjoyed an elite spring.

This year, Benson has long jumped 24-8.5, which is first for all classes in Kansas and ninth all time in state history.

The 100 mark ranks fifth in Kansas for all classes and third in 5A. In 5A, Benson is part of an outstanding 100-meter group that includes Shawnee Heights sophomore Jeremiah Smith, Hays High junior Jaren Kanak, KC Washington’s Jason Black, and Andover’s Ethan Richardson. Smith and Kanak are both in its first years of high school track. Smith has run 10.36 seconds, fourth-best in state history. Kanak has posted 10.66, third for all classes.

In ’19, Coffeyville senior Darell Jones ran 11.06 seconds in the Class 4A 100 meters. Jones, who has signed with Kansas State football, has posted 10.43 seconds this spring, which ranks No. 11 in state annals.

On the girls’ side at Manhattan, Salina Central’s Reagan Geihsler, a Nebraska signing, won the javelin with a throw of 129 feet. The girls’ shot put featured three big throws with Lansing’s Grayce Martin (39-11.5), Manhattan’s Teuila Ilalio (37-11.5), Junction City’s Joem Toala (37-5). Geihsler ranks in the top-15 in the discus and javelin in the state rankings.

Martin’s throw placed her fourth in Kansas for all classes. Ilalio currently stands eighth among all classes with a season-best throw of 38-6.

Of all events, the Class 2A high jump has the top returners from the ’19 state meet. Five of the top-six, including the top-three were non-juniors/seniors. Sterling’s Tyus Wilson, West Elk’s Devin Loudermilk and Meade’s Vance Shewey went 1-2-3 with jumps of 6-10, 6-8, and 6-4, respectively. Wilson has signed with Nebraska, and Loudermilk with Kansas.

Conway Springs’ Jonathan Wright took fifth in the high jump at 6-feet and third in the triple jump at 43-8. Jackson Heights’ Jason Bosley was sixth as a freshman with a six-foot clearance.

This year, Wilson-Loudermilk-Shewey rank in the top-3 for all classes. Wilson has cleared 7-2, fifth-best all-time in Kansas. Loudermilk was second at 6-10.5, and Shewey has went 6-6.75.

Blue Valley’s Dylan Arnold went 13-6 to win the 6A pole vault in 2019. This year, Arnold currently ranks fourth in all classes with a mark of 14-4.

Blue Valley North’s Andrew Orr captured the 6A high jump in ’19 with a jump of 6-4. This year, Orr has cleared 6-4 and is tied for seventh in all classes.

Andale’s Ty McPhail won the 4A pole vault in 2019 with a 15-foot clearance. McPhail went 16-2, which is the state’s top mark by more than a foot and ranks No. 18 all-time in Kansas history. McPhail set the mark and school record at the Pre-State Challenge earlier this month. Andale finished 1-2-7 in the boys’ pole vault at the ’19 state meet.

In the discus, Santa Fe Trail’s Brett Schwartz ranks second in Kansas with a throw of 176-7. Blue Valley’s Ben McAlister leads at 180-5. Schwartz captured the ’19 state title in the 3A discus at 171 feet.

Wichita County senior Sheldon Whalen, featured in the SIK last week, won the Class 2A 300-meter hurdles in 39.8 seconds. He continues to rank among the state’s top-10 in both hurdle events.

Nate Hein is also back after he won the 2A pole vault with a 13-foot clearance.

Twelve teams participated in Friday’s Abilene meet. Significant credit to Abilene for its new turf facility and excellent facility upgrades. On the boys’ side, Southeast of Saline won with 147 points. Hays High finished second at 121, and Marysville took third at 95.5.

Notably, the 1,600-meter girls featured Chapman’s Taylor Briggs and Southeast of Saline’s Jentrie Alderson. Briggs won in 5:01.07, and Alderson was second at 5:05.27. Both improved on their best times – and currently rank 1-2 for all classes in the event.

Briggs has won nine cross country and track championships and has signed with Iowa State. Briggs won 4A cross country last fall. Alderson was seventh and helped SES to the 3A team title.

Chapman 6-foot sophomores Sophia Cavanaugh and Maya Kirkpatrick have quietly emerged as one of Kansas better Class of 2023 athletes, while Irish freshman Elyssa Frieze has been a standout in her class.

The left-handed Cavanaugh easily led Chapman with 124 kills last fall for an extremely young team. Cavanaugh won the high jump with a 5-foot clearance. She set a new personal record with a 33-foot triple jump. Cavanaugh helped Chapman take fourth at the Abilene meet with 69 points. She finished fifth in the triple jump. Kirkpatrick, took third at 34-9. HHS’ Re Green won the event in 36-2.5. Kirkpatrick won the 100 hurdles in 16.87.

In the 300 hurdles, Kirkpatrick finished second at 49.09. Hays High’s Brooklyn Schaffer captured the event in 48.03. Schaffer will play college volleyball at Florida State College in Jacksonville after 470 digs last fall, top-15 in Kansas, per MaxPreps.

Doniphan West girls, featured several times on SIK this spring, continue to establish as a strong 1A favorite. At the DW Relays on Friday, the girls finished second and the boys third. Doniphan West set three school records.

Elle Williams lowered the 800 mark in 2:24.8. Chloe Clevenger set the school mark in the 3,200 at 12:19.60. The 400 relay set the school mark with 55 seconds. The relay finished second to Nemaha Central, which ran 53.3 seconds. NC has McKynsey Henry, Heather Suther, Ella Larkin and Julie Rottinghaus.

Other impressive showings included Nemaha Central’s Hannah Scott in the javelin with a throw of 121-2, and NC’s Nathan Deters won the discus at 155-3. NC’s Julie Rottinghaus won the long jump in 16-4 and the triple jump in 34-4.

Dubbert with big showing at Osborne meet; other top performances

All-around Beloit St. John senior Lauryn Dubbert continued her outstanding season and career. Dubbert won four gold medals at the Osborne Invitational. She threw the javelin 135 feet and posted 10 feet in the pole vault, which set the meet record. Dubbert set personal records of 15.87 seconds in the 100 hurdles and 48.24 in the 300 hurdles.

Valley Heights’ Emma Yungeberg broke her own javelin school record on Friday. She threw 140-9 at Frankfort. The previous mark was 133-7. Yungeberg is fifth for all classes and first in 2A. She was featured on SIK last week for returning girls’ state champions.

Madison junior Casey Helm posted 180-4 in the discus, which is second-best for all classes. He set a new personal best by more than 12 feet. Helm also has a shot put throw of over 54 feet this season. He is also the quarterback of the football team with great size around 6'4.5" 230 pounds.

We don't often highlight junior high but when it becomes national like we decide to take a look at it as we did with the sprinter from Sharon Springs-Wallace County earlier this season. Colter Oldham of Lakin went 177'11" in the discus last week in the 8th grade. Not only is it a school record its one of the top throws in the country for a middle school athlete. He has also went 52'11" in the shot put this year. Yes, the implemements are smaller and lighter, but this is an incredible feat.