Mason Ellis of Mulvane showed out on Saturday in Salina. 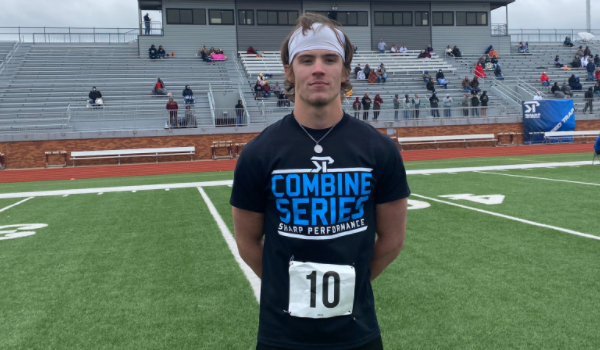 By CONOR NICHOLL & Chet Kuplen for Sports in Kansas.

In late December, Sports In Kansas talked with Mulvane coach Mike Abasolo for a long feature on the Wildcat boys’ basketball turnaround this winter. As well, SIK spoke with his son, Trey, a senior and eventual 4A Player of the Year finalist, and senior Aaron Ballinger.

Price, a two-time first team all-state quarterback, was known for his incredible speed and athleticism. He has multiple Mulvane marks, including career rushing touchdowns. Price accounted for 7,895 yards of total offense in his career. He played for the Wildcats from ’15-17 and is currently on FCS powerhouse North Dakota State. Price participated in all 16 games on special teams in 2019 and notably returned a punt 85 yards for a touchdown this spring.

In the winter, coach Abasolo believed junior Mason Ellis was in the same mold of Strunk, Redington and Price. Ellis sparingly played last fall because of injury. However, at that point, he already had some interest from Kansas State and North Dakota State. Coach Abasolo believed Ellis would be a high-level Division I football player.

“It’s Mason Ellis for us right now where he is not a basketball first guy,” coach Abasolo said. “He’s just the athlete. There’s not a better athlete on the floor for us than Mason Ellis.”

On Saturday, Ellis became the latest breakout star of the annual Sharp Performance Combine, hosted by Jake Sharp, a former standout running back at Salina Central and University of Kansas.

Sharp Performance combines are must-watch events every year and has long yielded Division I scholarships for top athletes in the days following the events. Generally several hundred athletes come to each combine where athletes can receive official measurements in a variety of events.

Last summer, the breakout performers included Coffeyville’s Darell Jones and Hays High’s Jaren Kanak and Gaven Haselhorst. All three had limited to no interest before Sharp. Jones and Haselhorst have signed with K-State. Kanak, a junior, has 15 total offers at the FCS/FBS level combined.

Ellis stands at 6-foot-2, 183 pounds and is listed as a quarterback, wide receiver and defensive back. He posted an unofficial 4.36 seconds in the 40-yard dash, a 10 foot, 2 inch broad jump, and a 38-inch vertical leap. He also bench pressed 185 pounds 15 times, per Kansas Pregame.

Currently, Ellis is not listed as one of the top-13 prospects in the Class of 2022, per 24/7. Ellis’ numbers were comparable to Kanak at his breakthrough performance last summer at Sharp. Then, Kanak measured 6-1, 197. He ran 4.41 seconds in the 40, posted a 37-inch vertical leap and benched 225 pounds 11 times. Ellis was looking to break 4.4 seconds, according to his on-field interview Saturday afternoon with SIK’s Bethany Bowman.

“He’s an incredible athlete,” Ballinger said. “I have never seen anyone come through Mulvane that has been as athletic as him. I think he is more athletic than Jayden Price.”

Last fall, Mulvane finished 1-7, though six of the losses came against Andale, Collegiate, Clearwater, McPherson and twice versus Rose Hill. Those teams combined for a 45-11 record. Even with the limited time, Ellis was the team’s leading rusher with 42 carries for 165 yards and a touchdown. He completed 17 of 36 passes for 178 yards with a score. No other Mulvane player reached 100 rushing yards for the year.

Defensively, Ellis finished with 19 tackles, 1.5 tackles for loss and a forced fumble. In basketball, Ellis helped Mulvane start 11-0 and finish 15-5. It marked the Wildcats’ best start since ’54-55 and top season since ’86-87, according to Mulvane sports information.

Last fall, SIK spoke with Hutchinson coach Mike Vernon in midseason on the Salthawks’ impressive turnaround. Hutchinson was one of several 5A West schools, along with Kapaun, Goddard and Hays High, that enjoyed a nice improvement last fall. Vernon needed to find a quarterback for 2020.

The 5-foot-10, 175-pound Perry currently plays for the Miami Dolphins. Khokhar had 210 receiving and 407 rushing in six games in ‘19, though battled injury. He most often played slot, wingback and wide receiver. Hutchinson is long known for the flexbone. Hutchinson has tried to incorporate some of Air Force’s passing attack out of the option.

“(Air Force’s) passing game, they put some people in some tough spots, and we have been working on it,” Vernon told SIK last fall.

Other Impressive and Notable Performers

Camden Beebe of Piper definitely passed the eye test at 6'3" and 305 pounds in the Class of 2023. His brother Colton played at Minnesota while brother Cooper currently starts offensive line as a freshman this past fall at Kansas State. There are several young pieces that Piper has coming back a few that could jump on the recruiting radar including Beebe.

Frontenac had good representation from Lane Franklin (6'2" 260 DL) and Collin McCartney (6'3" 199). McCartney could jump on to the scene as a MIAA and FCS prospect this spring with his great size as he continues to get faster and stronger in the weight room.

Weston Fries had a solid day and should be one of the best QBs in 5A next season for Salina South.

Trever Quaney may be a project for a team to develop but he passes the eye test at 6'8" 225 pounds in 8-Man football for Burliingame. He was also an all-state basketball player this winter.

Isaac Sheeran was perhaps the most impressive individual at the combine this weekend of Andover Central and a guy we could see getting instate Division I offers this year with his 6'5" 216 pound size. He also repped out 225 by 9 on bench press and a 29 inch vertical. Very impressive 2022 TE/DE.

Kade Harris is a 2023 ATH to keep an eye on and could fit into multiple spots. He led TMP to its best season in more than 15 years last fall. Very solid athlete that had a 21' long jump in 8th grade two seasons ago. He was a All-Non Senior pick at SIK last season.

Keyan Miller had a 4.49 40 along with a 32 inch vertical from Concordia. Although a bit smaller at 5'8" he does have 185 pounds to him and he could be a playmaker this season for the Panthers.

Danny Saili definitely passes the eye test at 6'3.5" and 360 pounds for Jefferson West and could be problem for a lot of offenses in college with his size and strength.