v Softball/Baseball in Kansas: Looking at impressive teams - Sports in Kansas 
Warning: include(../includes/bodytag.php): failed to open stream: No such file or directory in /home/kansass/public_html/ks/news/index.php on line 36

Bailey Way of Andover is having a huge year. 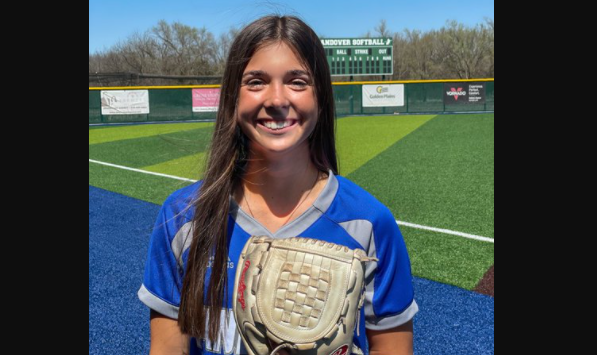 This week, Sports In Kansas takes a look at one breakout softball team from each class that has already hit milestones this season: 6A Topeka High, 5A Spring Hill, 4A Holton, 3A Russell/Victoria, 2-1A Marion. Plus, other top storylines and standouts from the last week.

Topeka High has established itself as Kansas’ best softball team through the season’s first three weeks. Two years ago, the Trojans finished 16-4 and lost in the 6A state quarterfinals to Derby. This spring, the Trojans have a bevy of impressive doubleheader sweeps, including versus Shawnee Heights, Topeka Seaman and Washburn Rural.

Topeka High has a bevy of star talent, including senior catcher Zoe Caryl, an Illinois softball commit, along with junior pitcher NiJaree Canady. In basketball, Canady has led Topeka High to state runner-up, undefeated Forever Four and state runner-up the last three seasons. Canady was a consensus top-5 all classes pick this winter.

In the previous 22 meetings, the Trojans were a collective 1-21 against Washburn Rural and Shawnee Heights, per MaxPreps archives. That included 0-7 versus Shawnee Heights. The only win versus either of those two teams in the last decade was a 3-2 victory against Rural on April 18, 2012.

Then, Rural defeated Lawrence Free State, 3-2, on Friday. Free State was 6-0 before the contest with four shutouts. FS had captured back-to-back 6A state titles in ’18-19 and features pitcher Tatum Clopton, reigning Gatorade Player of the Year and Oklahoma State commit. Two years ago, Rural beat Free State, 5-2, in the regular season. Then, FS beat Rural, 1-0, in the state championship.

This year, Rural stands at 4-2 after the FS loss and an ensuing 19-4 win versus Olathe West. Topeka High is 10-0 and Wichita Northwest is 8-0, the lone 6A undefeated squads with more than seven games played, per KSHSAA and MaxPreps statistics.

Topeka High has dominated its challenging competition. T-High opened with a 9-0 and 2-1 sweep against Shawnee Heights. Then, the Trojans rolled over Topeka West and Manhattan by a combined score of 56-3. Topeka High defeated Topeka Seaman, 6-3 and 10-1, on April 9.

Entering this year, Topeka High had swept Seaman in ’19, which ended a streak of 10 straight losses in the series.

5A: Undefeated Spring Hill with few mistakes through the season’s first 10 games

Spring Hill has new coach Corey Katzer. He has coached in the Frontier League for 20 years.

Spring Hill has done an excellent job of putting the ball in play. SH has just 40 strikeouts against 34 walks. Juniors Vanessa Murray and Maggie McNally are a combined 4-0 in 52 innings. Murray has signed with NAIA Ottawa softball.

Overall, Spring Hill has 109 strikeouts against just 13 walks. Spring Hill has outscored teams by a combined total of 104-10. That includes quality sweeps versus Eudora (5-3, 10-7 in nine innings) and Baldwin (2-0, 14-0) on Tuesday and Thursday last week.

Spring Hill won recent state titles in ’16 and ’17. This spring, SH opened with a 15-0 victory versus Chanute and 11-0 against Ottawa to capture the Fort Scott tournament.

Andover junior Bailey Way has enjoyed a huge start with a .769 average and seven extra-base hits in the first four games. Andover’s 8-0 win versus Maize snapped a three-game losing streak in the series that dated back to 2013.

In 4A, Holton stands at 9-0 with a total margin of 105-21. Holton has established itself as a legitimate Class 4A state contender.

Clay Center is 6-0 behind senior standout pitcher Clara Edwards, a South Dakota signee. Clearwater stands at 9-1. Longtime powers Andale-Garden Plain is 8-2, and Augusta is 7-2. On March 30, Garden Plain lost, 8-4, to Andover and 6-5 to Maize.

Grace Utz, a Cloud County Community College, is Holton’s lone senior for longtime coach John Dietrich. Holton had high expectations after a 20-3 season two years ago. The Wildcats have hit nine homers. Junior Sadey Walker carries a .588 average with seven doubles. Junior Staci Bond is hitting .520, and sophomore Timber Wilson carries a .517 average. Junior Gracie Gallagher is at .515. Walker and Gallagher are a combined 8-0 with a 2.33 ERA.

Surprise Russell/Victoria is 7-0 and leads the Larned regional. R/V, with coach Larry Plante, has already exceeded 2019’s win total from a 6-13 season. Also in the Larned regional, Ellsworth is 6-1, Thomas More Prep-Marian stands at 5-1, Beloit is 8-2 and Hoisington/Central Plains is 4-2.

Powers, a catcher/shortstop, has a 3.875 GPA and has committed to NAIA Southwestern College. Powers has also stolen 12 bases. In ’19, Powers served as the catcher and caught 17 runners trying to steal. She hit .466 with 17 stolen bases, two homers, 19 RBI and 26 runs scored. Powers has served as a captain for volleyball and softball since he was a sophomore. Powers and Bay were the lone seniors for Russell volleyball last fall. Kuhn helped Victoria enjoy a big turnaround in basketball.

Russell was scheduled to play at Thomas More Prep-Marian on Friday, but the doubleheader was rescheduled because of weather.

Dome carries a .522 average, and Bay is at .520. Kuhn, an all-state tennis player and key basketball player for Victoria, is hitting .517.

Bay, Miller and sophomore Brooklyn Nowak have all seen time in the circle and stand a collective 6-0 with a 2.86 ERA with 61 strikeouts against 12 walks. Russell is hitting .448.

Haven’s Maguire Estill has carried a .680 average, along with 17 hits, 16 runs, 15 RBI, four doubles, two triples and two homers. Estill is 4-0 in the circle. Estill has signed with Division II Arkansas-Monticello.

Out east, Nemaha Central is 4-0 in the Marysville regional, and Silver Lake stands at 8-0 in its own regional.

Spearville is 11-1 and has won six straight. In the Riverside regional, Troy is 8-0 and McLouth is 2-0. Mission Valley is 9-1. Troy has outscored teams by a combined total of 100-28. That includes 6-5 and 7-4 doubleheader wins versus Riverside on April 9.

Marion opened the season with a 13-5 loss to Council Grove, and then won the second game of the doubleheader, 18-15. The victory snapped a 10-game losing streak against Council Grove that dated back to a 7-4 win on April 12, 2016.

Marion had lost four in a row and six of seven against Trinity Catholic, which took third place at 2-1A state in 2019. The Warriors have won seven consecutive versus Inman.

Hays High’s Dylan Dreiling tied the school record with 18 strikeouts in one game earlier this week. He allowed one hit in a 3-0 victory against rival Great Bend. HHS stands at 4-1.

Lakin’s Jaya Esquibel enjoyed a big basketball season and cleared 1,000 career points. She hits .767 with 23 hits in 36 plate appearances. Esquibel has 21 runs scored, along with 20 RBI. She has 16 extra-base hits, including 10 doubles and a homer. Lakin is 5-5.

Dylan Rinker, also McPherson’s standout quarterback, is 4-0 with a 0.74 ERA. Rinker has 21 strikeouts in 19 innings pitched. McPherson is 7-1 in Class 4A.

Bucklin’s Nate Bowman has posted a 1.73 ERA with 49 strikeouts in 24.1 innings pitched. Bucklin, which co-ops with Coldwater-South Central, stands at 7-3.

Lakin senior Jace Bachman carries a .647 average with 22 hits, 16 RBI, along with 20 runs scored. He has seven doubles, two homers and six stolen bases. Bachman has captured two wins on the mound. Lakin is 6-4 in Class 3A.

Inman’s Carter Brown earned Sports in Kansas 1A Defensive Player of the Year last fall. Brown has a .429 average with 17 runs scored in 10 games. Brown has four doubles, three triples, 15 hits and seven stolen bases. He has recorded two saves for an 8-2 squad.

Cheney baseball has enjoyed a big season with a cumulative .509 batting average. Cheney is 4-2.

Maize sophomore Avery Johnson has already excelled in football and basketball. A quarterback, he holds Power 5 football offers. Johnson holds a .650 average with 13 hits and 14 runs scored in seven games. Maize is currently 5-2.