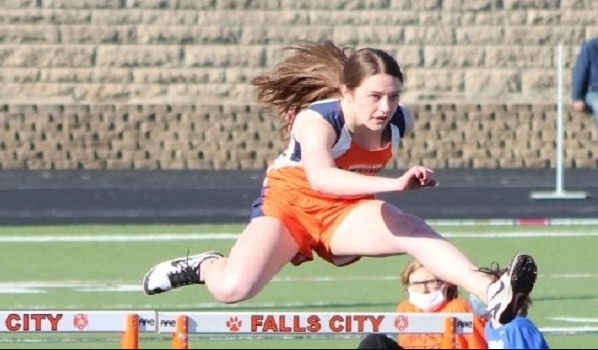 By CONOR NICHOLL for Sports in Kansas/Track in Kansas

Last week, Sports In Kansas looked at the bevy of school records that had fallen in the first full week of competition. Many of the records came from freshmen and sophomores in first career meets after 2020 was cancelled from COVID-19. This week, SIK looks at nearly all the 2019 girl state champions who returned this year, along with other notable showings. Those titlists would have freshmen or sophomores in ’19. Next week, SIK will have an in-depth look at the returning boys’ titlists.

Some of the girls, such as Andale’s Katelyn Fairchild, Lincoln’s Jaycee Vath, Smoky Valley’s Belle Peters, Chapman’s Taylor Briggs, Circle’s Kimalee Cook and Garden Plain’s Brooke Hammond are already well-known in Kansas. However, freshman/sophomore girls combined to win 26 individual titles at the ’19 state track meet. Interestingly all classes except 5A had an individual freshman/sophomore champion two years ago.

We start this week with the Fairchilds at the Pre-State Challenge, held every year at Wichita State University’s Cessna Stadium, home of the state track meet in less than two months. Pre-State, generally the first major meet of the spring that combines the entire state, is split into three groups: 1-3A, 4-6A and the all-classes Elite. Competition was Thursday and Friday.

This year, Katelyn threw 171-7, with Mckenzie at 135-2 and Marx at 134-10. They rank 1-2-6 respectively for all classes as of April 15, per track historian Carol Swenson’s statewide list. Katelyn best her previous season high of 163-10. In the preseason, Katelyn set a goal to break the all-time Kansas record. She is now third in Kansas history and has the nation’s top throw this spring.

Also on the boys’ side, Andale’s Ty McPhail cleared 16-2 in the pole vault and won the Pre-State event for more than three feet. He set the school record.

In 2A, Wabaunsee’s Lauren Schutter won the triple jump with a mark of 36-4 in ’19. Schutter tied for the Pre-State Elite triple jump championship with a mark of 34-7.75. Hutchinson’s Colleen Page tied for first at 34-7.34 in an extremely close competition. Hesston’s Emily Friesen was third at 34-7, and Jackson Heights’ Kanyon Olberding finished fourth at 34-5.

Entering Pre-State, Hammond was third at the 200 for all classes in 25.77 seconds.

Sterling’s Tyus Wilson, a two-time state high jump champion and Nebraska track signing, cleared 7-0 1/2 to win the high jump. Wilson has cleared 7-2, which is fifth-best in Kansas history. Wilson, West Elk’s Devin Loudermilk and Valley Falls’ Nathan Hawk rank first, second and third in Kansas in high jump. They are all 2A. Loudermilk has cleared 6-10.5, and Hawk has surpassed 6-6.

Wilson has the best jump since Jefferson West’s Briar Ploude went 7-2 in 2009. Loudermilk has signed with KU.

Shawnee Heights’ sophomore Jeremiah Smith, who has enjoyed an excellent start, won the 110-meter hurdles Elite crown at 15.17 seconds. Smith captured the 100 title at 10.59 seconds. Holcomb’s Zephyn Mason was second at 10.81 in a competition where four runners broke 11 seconds.

Olpe’s Max Blaufuss, featured on SIK earlier this season when he broke the Eagles’ school javelin mark, won the boys’ Elite javelin at Pre-State. He threw 190-7. Garden Plains’s Arden Rex was second at 184-2, and Andale’s Riley Marx earned third at 174-8.

Winfield’s Camilo Tarin went 4:26.18 and captured the 1,600 title in the Pre-State Elite division.

2019 state champions who did not compete at Pre-State Elite:

Jefferson County junior Adie Manville won the ’19 Class 2A high jump with a mark of 5-2. Manville cleared 5-0 and won the high jump Tuesday at Royal Valley.

Junior Emma Yungeberg, Valley Heights’ standout multi-sport athlete, won the 2A javelin title in 129-11. Yungeberg won the javelin in 131-9.5 at the Nemaha Central Invitational on Tuesday.

Among 3A returning champions, Russell’s Renee Nichol won the ’19 long jump in 17-6. At the Smith Center Redmen Relays on April 13, Nichol posted 14-8 in the long jump and triple jumped 32-9.75. A senior, Nichol took third in the triple jump.

In 6A, Gardner-Edgerton’s Kendra Wait, the reigning Gatorade Track Athlete of the Year and a Creighton volleyball signing, won the 100 in ’19 in a time of 12.04 seconds and earned the shot put crown at 42-11.75. Wait has also won Gatorade Volleyball Player of the Year. Wait currently ranks fifth for all classes in the 100 at 12.40 seconds. Her sister was a standout volleyball at KU, her brother was a standout pole vaulter at Kansas State while her father was a 7'+ high jumper in HS at Frankfort that went on to jump for Kansas State.

In Class 4A, Holton’s Saydee Tanking has broke the school javelin record for the second time this year. Tanking has thrown 127-7 and 131-4.

In 1A, Beloit-St. John’s/Tipton’s Lauryn Dubbert enjoyed a big meet at Smith Center. She has ranked in the top-five in the javelin for all classes with a throw of 137-1. She also went 10 feet in the pole vault, along with 16.60 in the 100 hurdles and 50.3 seconds in the 300. Dubbert took second in both hurdle events. Dubbert captured both field events.

Silver Lake’s Brogan Renfro set a new school record in the triple jump at 44 feet, 0.25 inches. He has the top 3A mark and the fourth-best mark for all classes in Kansas.

Louisburg senior Alyse Moore has committed to Kansas. She has the third-best throw in javelin this spring and was a key part of Louisburg’s surprise final four basketball squad this winter.

On Thursday, Chase County delivered 24 team personal bests and cruised to a boys’ championship at the Travis Sheeley meet. Senior Britney Schroer won the javelin in 112-1. Senior Brylee Potter earned the long jump title in 15-3. Senior Tylon Ybarra helped CC to relay titles in the 400 (45.23) and 1,600 (3:47).

Doniphan West continues to break school records. On Tuesday, DW, likely the early season 1A girls’ favorite for a state title, competed at the Atchison County Invitational. DW has won back-to-back girls’ cross country titles. Junior Elle Williams broke her own school mark in the 800 in 2:27.80. In the 10-team meet, Holton won the meet in 167.5 and Doniphan West was second in 90.5. Claire Cole has also set school marks in the 100 hurdles in 16.6 seconds, the 300 hurdles in 50.9 seconds and helped the 1,600 relay to a school mark.

Another note worth adding

We don’t talk a lot of middle school sports but this definitely deserves a shout out. Aria Pearce of tiny Sharon Springs Wallace County is a 6th grader and has the second fastest time for a 6th grader in the nation in the girls 100 meter dash and seventh fastest in the US among all 6th, 7th or 8th graders combined. She ran a 12.62 in the 100 at her first meet of the season with the nearest competitor two seconds behind her. 12.62 would win most high school meets in Kansas.