v School records fall in the first week of Track's return - Sports in Kansas 
Warning: include(../includes/bodytag.php): failed to open stream: No such file or directory in /home/kansass/public_html/ks/news/index.php on line 36

School records fall in the first week of Track's return

Malik Benson from Lansing is one of the states top athletes 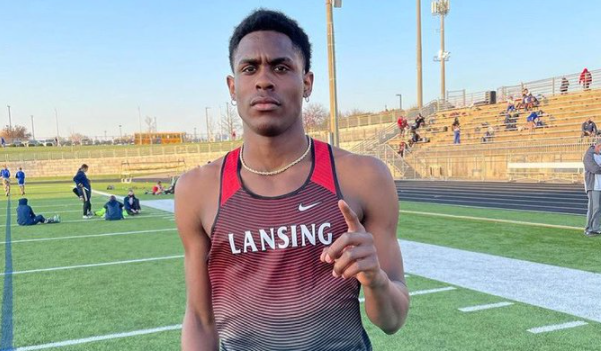 The sophomores had never run in a high school track meet since 2020 was cancelled because of the COVID-19 pandemic. Junior Elle Williams is the lone DW girl on the entire track team who has ever competed in the state track meet. In 2019, Williams finished eighth in the Class 1A 800-meter run.

“It was so exciting to be able to get out there and just to see how happy the kids were…,” coach Clevenger said to SIK. “It was just awesome. I think they just missed the environment where they could all just be together and support each other. That team/family atmosphere is the biggest thing they miss.”

At Falls City, Doniphan West broke several school records, including by those who had never previously participated in a high school track meet. DW’s performances encapsulated the first 10 days of the 2021 track season, the first in two springs. Multiple school records have fallen – especially from sophomores who had freshman year wiped away.

“It could be very, very exciting,” Chloe said of track season. “Very exciting. Our girls’ team is crazy good. We have so much talent.”

Additionally, Larned sophomore Jayme Hagerman, a talented junior high trackster, is a starter at outside hitter on the volleyball team and recently won a 3A state powerlifting title. Hagerman, featured at SIK this week, jumped 37-11 in the triple jump at the season-opening La Crosse Invitational. Hagerman continually improved throughout her series. She broke the school mark and has the top jump for all classes.

“I thought it was better than my last one, but I didn’t think that it was going to be that far,” Hagerman said earlier this week.

Additionally, Hays High junior Jaren Kanak has football offers from Kansas State, Indiana, TCU, and Vanderbilt, among other Power 5 schools. Kanak, featured last summer after his huge performance at the Sharp Combine, has back-to-back years as an all-purpose player for Hays High football. The 6-foot-2, 210-pound Kanak has posted 4.41 in the 40-yard dash and is rated as the No. 6 player in the Class of 2022, per 247, a recruiting industry leader.

Kanak, though, had never competed in a high school track meet until the season-opening McCook (Neb.) meet. Kanak posted a 10.66 laser time in the 100-meter dash and set a meet mark. Kanak suffered a hamstring pull that cost him eighth grade track.

In ninth grade, Kanak battled a serious back injury and didn’t compete in track. Last year was cancelled by the pandemic. Now, Kanak, a national football recruit, ranks third best in Kansas behind 5A’s Shawnee Heights’ Jeremiah Smith (10.36) and 4A Coffeyville’s Darell Jones (10.43). Jones, who also had a huge Sharp Combine last summer, has signed with Kansas State football.

Kanak has recorded a 22.16 in the 200, which is No. 1 for all classes and just .04 ahead of Smith, a sophomore. Kanak delivered a 24-foot long jump, though barely scratched. Kanak was also featured on SIK this week. At the 2019 AAU Junior Olympic Games, Smith set a new 14-year-old 200-meter hurdle national record.

Smith, who opened at the ESU Relays, won four events. He broke the school mark in the 100 that had stood since 1988.

Andale’s sister duo of senior Katelyn and sophomore McKenzie Fairchild has been ranked 1-2 nationally in the javelin. Katelyn has signed with Texas A&M track. They are part of a long history of Fairchild excellence at Andale. McKenzie leads Kansas in discus at 133-8. Katelyn has thrown 115-8. In the javelin, Katelyn is at 163-10, and McKenzie stands 148-9. Both were first team all-state volleyball. In basketball, McKenzie was the league defensive player of the year, and Katelyn captured league player of the year.

As well, Stanton County’s Chesney Peterson, another sophomore, broke a pair of distance school records at the Stanton County Invitational. She ran 5:10 in the 1,600 and broke Jenna Black’s mark of 5:18 set in 2012. Her 11:20 in the 3,200 broke the old mark of Dodie Martin’s 11:24 from ’96. Peterson is a defending state cross country champion.

On Thursday, Madison opened up its track season. Casey Helm, who enjoyed a nice football season as the Bulldogs’ 6-foot-4 junior quarterback, broke school marks in the discus and shot put. Helm went 168-3 in the discus and 54-1 in the shot put.

Olpe senior Max Blaufuss set a new school record in the javelin with a throw of 198-8. The previous mark came from 2012. Blaufuss has the No. 1 mark for all classes.

Earlier this week, Halstead senior Doug Grider broke a 49-year-old school record in the shot put with a throw of 53-7.

Lansing’s Malik Benson leaped 24-4.75 in the long jump for a new school mark. Benson has Division I athleticism and is headed to Hutchinson Community College for football. In the fall, Benson was easily Lansing’s top receiver with 28 catches for 700 yards and 10 scores.

On Thursday at Paola, the Spring Hill girls set a new school record and won the 1,600 relay in 4:08. The relay has seniors Izzy Williams, Emily Dowd, Jalyn Stevenson and sophomore Gavyn Hurley. Stevenson has signed with Washburn volleyball. Williams, a senior, was fifth in the 5A 100 dash and state runner-up in the 200 dash in ’19. She captured the 4A 200 title as a freshman in 2018.

She helped the 1,600 relay to a sixth-place finish at 4:09.97. Williams is the only one back from that relay. Entering this spring, Williams held four school records. When she won the 200 state title, she posted 25.86 seconds, which broke a school mark that had stood since 1982.

As well, Spring Hill boys and girls captured team titles at the season-opening Baldwin meet. The 400 relay ran 51.18 seconds, which set a new meet record, per the Miami County Republic. The 1,600 relay posted 4:17 before it significantly lowered the time at the second meet. Williams has won the 100 and 200 at both Baldwin and Paola meets.

While not a school mark, Inman freshman Tanner Heckel was highly impressive at the Sterling Invitational on Tuesday. Heckel went 21-4 in the long jump and 42-8.5 in the triple jump.

On April 3, Olathe West girls captured the Shawnee Mission South relay and the boys took third. The 1,600 relay earned a school record in 4:03.02, which is currently the state’s best time for all classes by more than five seconds. Junior Kennedi Cline led OW to a 1-3-4 finish in the 400. She significantly broke the school record in 58.16.

Junior Maddy Karnei also set a new school record in the 100 hurdles in 17.98. Paige Baker, Charis Robinson, Ava Wardlaw and Bree Newport set the 3,200 relay in 9:43.80. Tyler Jones set the new school record and won the high jump with 6-4. Claire Thomas again broke her own school mark in the pole vault in 10-6.

Gardner-Edgerton has had several impressive performances early at the Shawnee Mission South relays. Freshman Bella Meili posted 26.61 in the 200 dash, which ranks sixth as a freshman in G-E history. She posted strong legs on the 400 and 1,600 relay. Senior Matt Limer has posted strong times in the 300 hurdles, fifth in the long jump and the 1,600 relay.

Manhattan’s Daniel Harkin committed to Kansas Wesleyan for cross country and tennis March 20. He was the 2019 Kansas Gatorade Runner of the Year and a 3-time individual state champion. Harkin currently ranks second in Kansas in the 1,600 run at 4:22.33, and second in the 3,200 at 9:29.95.