v Labette Bank Athlete of Month:Frontenac's Heather Arnett - Sports in Kansas 
Warning: include(../includes/bodytag.php): failed to open stream: No such file or directory in /home/kansass/public_html/ks/news/index.php on line 36

Heather Arnett is having a big junior year for Frontenac. (photo: Amanda Morrison) 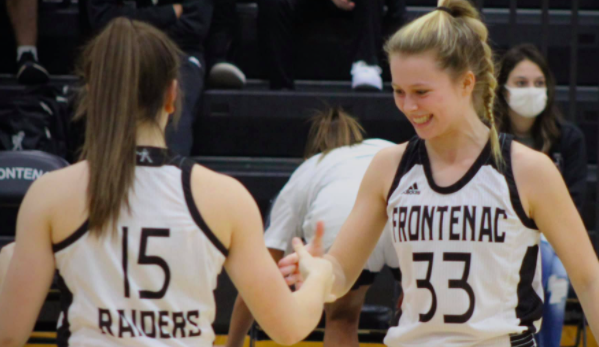 Arnett helped Frontenac to a 19-4 mark and Class 3A Final Four finish when the Raiders lost to Cheney. The Cardinals eventually finished undefeated for the state championship. Arnett paced Frontenac with 14 points in the Cheney loss.

Last winter, Frontenac reached the 3A Forever Four with a 22-2 record and ended the season on a 14-game winning streak. Frontenac has reached state basketball three of the past four years. It’s the first time Raiders girls’ basketball has made back-to-back final fours since three in a row from ’81-83, according to Kansas historian Carol Swenson. Last year, Arnett delivered eight points, six rebounds and three steals per contest.

As well, Arnett has enjoyed great success in volleyball and softball. Frontenac volleyball is 31-13, 38-7 and 29-8 the last three years. Arnett, an outside hitter, played in 34 sets as a freshman. In ’19, Arnett was third with 227 kills and second with 58 aces. This fall, Arnett paced Frontenac with 331 kills and 298 digs, a rare combination. She was a first team all-league selection.

Arnett should be one of Kansas’ top softball players this spring. In ’19, she helped Frontenac to a Class 3A state title. Arnett was first team all-state by Sports In Kansas and the Kansas Softball Coaches Association. Frontenac has won titles in ’16 and ’19 with veteran coach Cassie Rhuems. Entering this spring, she stands 198-74 in 14 years, including a 20-6 mark in ’19. Frontenac would have been a 3A favorite last year before coronavirus cancelled the season. On Tuesday, Rhuems picked up career win No. 200.

As a freshman, Arnett, a shortstop hit .533 with 50 runs scored, 38 steals and a .966 fielding percentage. She and senior third baseman Raven Warren are the lone Raider starters back from the state title team. Cheney, Silver Lake, Anderson County, Haven and Hoisington/Central Plains highlight the 3A preseason softball favorites.

Labette Bank Athlete of the Month can be nominated at sportsinkansas@gmail.com. Labette Bank is a proud supporter of sports coverage in the state of Kansas with Sports in Kansas.