Morgan Meyers had a big season for Cunningham. (courtesy photo) 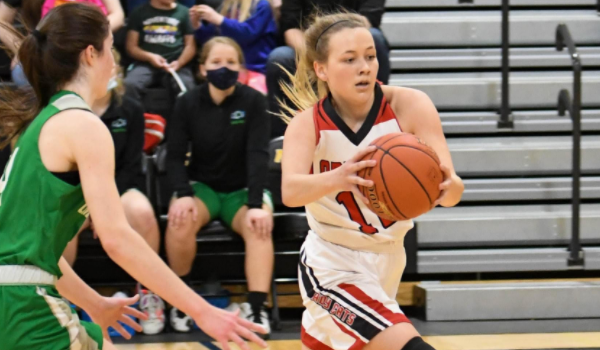 Cunningham 5-foot-7 senior point guard Morgan Meyers has delivered a highly impressive career for her father, Wildcat coach Eric Meyers. This winter, Cunningham finished 23-3. Morgan was a SIK 1A Player of the Year finalist as a junior. This year, she led Cunningham to a state runner-up showing against Claflin-Central Plains at Barton County Community College. Meyers, who received strong Division II/MIAA interest, has signed with Barton. Cunningham joined the 1988 Wildcat squad as the lone girls’ squads to reach a final in program history.

Meyers helped Cunningham to a state final four showing as a freshman and state quarterfinalist her junior year. Morgan, the youngest of three sisters, tallied 391 points this season and went just over 1,400 in her career. This year, Meyers missed three regular season games because of injury.

Overall, she was among Kansas’ best shooters with 45.8 percent from the field and 56.5 percent on effective field goal shooting, a measure of 2-point and 3-point shooting. She averaged 17.8 points, 6.3 assists, 3.5 steals and 3.4 rebounds. Morgan, known for her excellent ball handling, studying game film and basketball IQ, had a 1.96 assist to turnover ratio and shot 74.7 percent from the foul line. She started all four years and was the 54 Classic tournament MVP three times.

Cunningham defeated Ashland, 56-28, in the state quarterfinals. In the state semifinals, the Wildcats beat Beloit-St. John’s/Tipton, 52-31. In the finals, Central Plains narrowly beat Cunningham, 39-34. The semifinal win helped to tilt the POY honor in Meyers’ favor over BSJT senior standout Lauryn Dubbert, who finished in a very close second in the voting. Meyers finished with 28 points, and Dubbert delivered 18.

Congrats to Morgan Meyers on the Sports in Kansas 1A-II Player of the YEar and the Cunningham basketball team on their state runner-up finish. We are proud of you! - from the Ninnescah Valley Bank in Cunningham, proud supporters of WIldcat athletics!

Congrats to Morgan Meyers and the Cunningham Wildcats on a fine basketball season from your friends at BTI John Deere in Pratt. Best of luck in your future endeavors. Visit us online at btiequip.com

Sports in Kansas 1A-II Player of the Year Finalists