v Harlan Obioha named Sports in Kansas 2A Player of Year - Sports in Kansas 
Warning: include(../includes/bodytag.php): failed to open stream: No such file or directory in /home/kansass/public_html/ks/news/index.php on line 36

Harlan Obioha named Sports in Kansas 2A Player of Year

Harlan Obioha of Hoxie named 2A Player of the Year from Sports in Kansas. 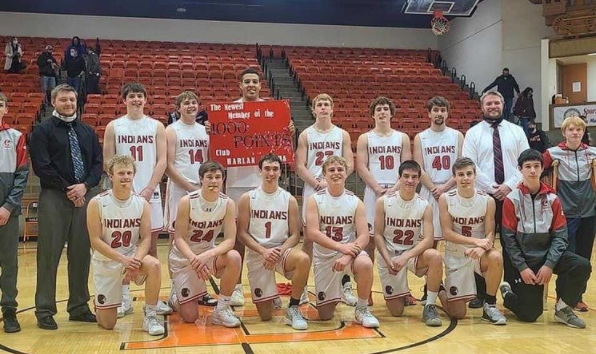 2021 Sports in Kansas 2A Basketball Player of the Year

A returning first team all-state selection, 7-foot-0, 300-pound Hoxie senior Harlan Obioha is among Kansas’ best known athletes. Obioha has collected Division I offers in football and basketball and helped Hoxie to final four showings in football and basketball this school year. Obioha averaged 21 points and 13 rebounds and shot 78 percent from the field, along with 75 percent from the free throw line.

He cleared 1,000 career points in just three years of varsity action. Hoxie finished 24-1 and took a 73-56 upset loss to Alma-Wabaunsee in the state final four. The Indians were trying to win the first boys’ basketball title in school annals and finish as the first-ever Mid-Continent League boys’ basketball undefeated squad for a conference that dates back well over half a century.

Obioha was the leading vote-getter in the MCL, ahead of Ellis’ Brady Frickey and Thomas More Prep-Marian’s Jackson Schulte. Frickey and Schulte were SIK POY finalists in 2A and 3A, respectively. In late season, Keith Riley the coach at Hill City for 50-plus years, noted Obioha’s singular talent, especially defensively. Hoxie went 11-0 overall, including a pair of wins versus Thomas More Prep-Marian, a 3A Final Four squad. TMP coach Bill Meagher tried different defenses versus Obioha, but he continued to finish well inside. The Indians defeated WaKeeney-Trego three times and Ellis twice. Those teams finished 33-7 when not playing Hoxie. In the 73-56 semifinal loss to Alma-Wabaunsee, Obioha tallied 38 points.

Congratulations to Harlan Obioha on being named the 2021 Sports in Kansas 2A Player of the Year. Good luck in your future endeavors. BTI is a proud supporter of local athletics. Find us online at www.btiequip.com

2A Sports in Kansas Player of the Year Finalists