v Chapman repeats as 6A Sports in Kansas Player of Year - Sports in Kansas 
Warning: include(../includes/bodytag.php): failed to open stream: No such file or directory in /home/kansass/public_html/ks/news/index.php on line 36

Chapman repeats as 6A Sports in Kansas Player of Year 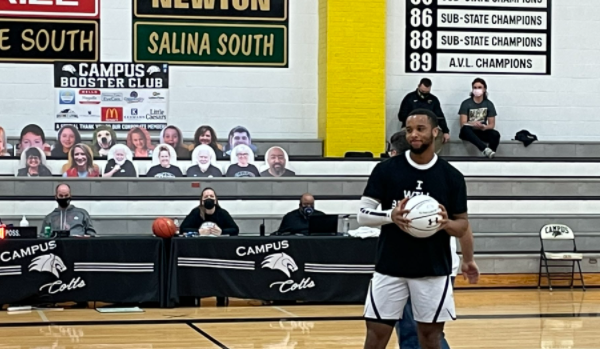 2021 6A Sports in Kansas Boys Basketball Player of the Year

A Tulsa signee, Haysville-Campus senior Sterling Chapman is a two-time Class 6A Player of the Year and is considered the best player in Campus history. Chapman slightly edged Lawrence’s Zeke Mayo for the 6A POY honor in a very tight race. Mayo earned Sunflower League Player of the Year. Campus was undefeated Forever Four last winter. This season, Campus finished 21-3. In the quarterfinals, the Colts beat Hutchinson, 70-61. In the semifinals, the Colts beat Lawrence Free State, 42-37. In the finals, Campus lost, 67-59, to Blue Valley North. It marked Campus’ second all-time state championship appearance, first since 1988. Campus averaged 69.3 points per game.

Chapman finished with 19.1 points, 12.1 rebounds, 3.8 assists and 2.1 steals per game. Senior Stevie Strong stepped up as the Colts’ second-best scorer and enjoyed a big year with 17.8 points, 4.9 rebounds and 4.2 assists a contest. Chapman shot 51 percent from the field, along with 61 percent on free throws. The 6-foot-5, 200-pound Chapman earned AVCTL Player of the Year this winter. Chapman set a bevy of school records. He had the most rebounds in a single game in school history (20), most rebounds in a season (291), and the most points in school history (1,410).

Mayo, who has committed to South Dakota State, helped Lawrence reach state for a seventh straight year. Mayo finished with 21.2 points, 6.8 rebounds, and 2.7 assists, including 41 points in a 71-63 semifinal loss to Blue Valley North, including 29 in the fourth quarter.

To view all-state lists for 6A and all other classes see the mainpage of our website.

Campus High School and USD 261 Haysville would like to congratulate the boys basketball team on another great season. Congratulations to Sterling Chapman on the 6A Player of the Year from Sports in Kansas. We are proud of you!

6A Sports in Kansas Player of the Year Finalists