v 2021 Sports in Kansas Girls All-Tournament Team - Sports in Kansas 
Warning: include(../includes/bodytag.php): failed to open stream: No such file or directory in /home/kansass/public_html/ks/news/index.php on line 36

Payton Verhulst is one of the top players in the country. photo: AJ Hildreth 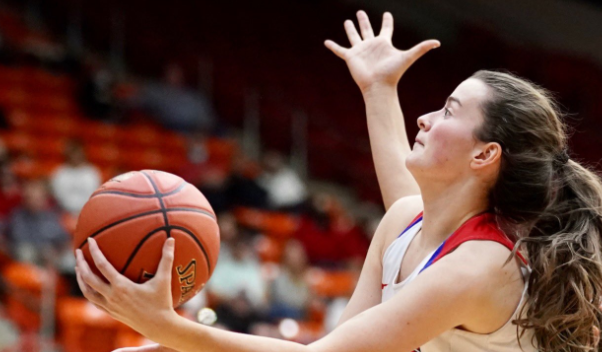 In addition to our all-state honors, which will be released next week (3/27 & 3/28) along with stat leaders from the season. We have released our Sports in Kansas 2021 Girls All-Tournament Team (Girls also will be up on our website main page later this evening). To be eligible for the five member list per class (more in some classes due to tie in voting), you had to play in at least two games at the 2021 state tournament this season, play based only on the state tournament - has nothing to do with the rest of the season or all-state teams or all-league teams.

PARENTS/ATHLETE/COACH: To order your All-Tournament Team Patch from Sports in Kansas email Chet Kuplen at sportsinkansas@gmail.com. You can also wait to order these with the all-state and stat leader patches on Sunday 3/28.

Kennedy Taylor 23 point and 19 rebound performance in the semifinal was her shining moment of the state tournament along with Nijaree Canady who had an incredible tournament who had 25 points and 12 rebounds in the title game. Taylor also added 15 points and nine rebounds in the title game. These were hands down the two best players in the 2021 6A tournament and both will be major contenders for the 6A Player of the Year.

Sports in Kansas 5A State Tournament Most Outstanding Player

Culliton had a huge title game with 16 points and 14 rebounds on the way to giving the Saints the state title over previously unbeaten Andover Central.

Sports in Kansas 4A State Tournament Most Outstanding Player

Despite playing just 23 minutes in the title game, Verhulst still had 14 points, seven boards and four steals. The most complete player in Kansas also had 23-points, 10 rebounds and four steals in the semifinal win over Andale. She has signed to play at Louisville next season. Grace Pyle, last seasons SIK 5A POY, also had a big-time state tournament with 21 points, five boards and five steals in the semifinal win over Louisburg and had a game-high 16 points in the title game against Bishop Miege.

Sports in Kansas Most Outstanding Player of the 3A State Tournament

Scheer scored 77 points over the 3A state tournament to earn most outstanding player honors on the way to a perfect season. She has been the back-to-back POY from SIK in 3A the last two seasons, awaiting the 2021 selections next week. It was hard to pick what second player to go with from Cheney as they had a well-rounded star cast to go with Scheer in Brynn McCormick, Lexi Cline and Brooklyn Wewe but it was Campbell Hague’s three-game performance over the state tournament that jumped off the page & was very solid including the game-winner against Halstead to ultimately put the Cardinals into the Final Four in the Double Overtime win. Hague had 21 rebounds over the three-game tournament along with nine points in the championship game, second on the team. Jordyn Beard and Mikyn Hamlin really shined for Hugoton in the semifinal with Beard flirting with a triple double. Hamlin also had over 20 points and picked up a WSU offer as a sophomore just a day after the game. Renyer and Schumann were outstanding in the postseason leading Sabetha to the runner-up. 3A is about as deep as it gets with talented players in Kansas, all-state teams (based on the entire season, not just the tourney like this) next week will be interesting to see who gets the top 20 spots.

Sports in Kansas 2A State Tournament Most Outstanding Player

Horsch had 23 points and 10 boards in the semifinal win over Garden Plain to put the Bears in the state title game. She followed that up with a game-high 16 points and six boards to give Sterling the state basketball championship in 2A on Saturday. Sterling had three players in double-figures in the title game with Horsch, Briar and Linden. In the semifinal Horsch, Linden and Bagley scored in double-figures with Beagley adding 18 to Horsch’s 23. Briar, who will contend for the 2A POY, added five steals in the title game and five assists in the semifinal.

It was a total team effort for the Eagles. While the stars may be Smith, Heins and Bishop it took all of them to pull off one of the best defensive seasons in Kansas history, allowing the least amount of points at a state tournament in Kansas history. All players played a specific role and were about the team success. Starters earned this nod in Macy Smith, Marley Heins, Maya Bishop, Hattie Fischer and Lauryn Broyles played huge roles in leading the Eagles to a perfect record this season.

Meyers led Cunningham to their first ever state title game and did so by scoring 28 points in the semifinal and then led all scorers in the final against Central Plains with 15 points. She will be a heavy contender to be the 1A-II player of the year.