v Finding closure on a great day for Olpe basketball - Sports in Kansas 
Warning: include(../includes/bodytag.php): failed to open stream: No such file or directory in /home/kansass/public_html/ks/news/index.php on line 36

Finding closure on a great day for Olpe basketball

Olpe girls celebrate its fourth state title while the boys picked up their first. 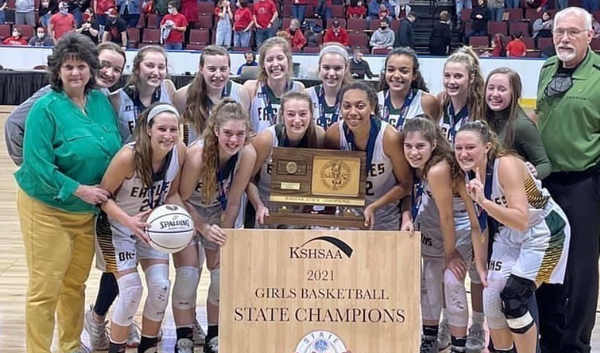 DODGE CITY – Neleh Davis sat by herself in section 113, two rows from the United Wireless Arena court and slightly behind the scorer’s table Saturday afternoon. She had “a lot” of emotions as she watched Olpe warm up before the Class 1A, Division I state championship against Norwich.

Neleh was a key four-year player and cleared 1,000 career points. At the 2020 state tournament, Neleh helped Olpe defeat Norwich, 59-43, in the Class 1A quarterfinals. That marked Neleh’s last competitive basketball game. A few hours later, Kansas shut down state basketball because of coronavirus.

Olpe was favored to meet undefeated Central Plains in the state championship. CP had the longest winning streak in state annals at 136 games. Olpe had not played the Oilers since 2016 and just twice in the last eight years. Neleh never received the opportunity to face CP. She is currently a University of Kansas student.

“What stands out to me the most, just never knowing what could have been,” Neleh said. “We just sit around and wonder, maybe we could have won that state championship. There’s just not really much closure on what happened.”

The Eagles had six seniors this year: point guard Macy Smith, Camille Steffes, Marley Heins, Hattie Fisher, Maya Bishop, and Lauryn Broyles. As the Eagles prepared for the title, Neleh thought back to 2020. Plus, she was happy to watch the seniors improve this winter.

“I couldn’t believe it was happening,” Neleh said. “And now like seeing the girls and the state championship, it’s an awesome feeling. I really want them to get this and get some closure on last season.”

Earlier Saturday at the team hotel, Nelson invited Neleh to watch the game from the bench. Shortly before tipoff, Neleh came down courtside and sat on the end of the bench's second row. She saw Olpe complete a 25-0 mark and set the state all-classes record for fewest total points allowed in three state tournament games at 73, per Kansas historians Carol Swenson and Brett Marshall.

With 26.3 seconds left, Nelson pulled the starters, all seniors. They quickly met with Nelson, who mentioned Neleh probably needed a hug. In a defining moment, the seniors went over to Neleh and gave her a tearful embrace.

“It was amazing,” Bishop said. “She was our one senior last year. She was our leader, and to find out that her career was cut short just like that – it was terrible. So we were really also playing for her, because she is a big part of our family, and she will always be a part of our family, so we wanted to share this victory with her, too.”

Additionally, Olpe won 1A football last fall. Chris Schmidt leads both football and boys’ basketball at his alma mater. He became the state’s first coach since 3A Scott City’s Glenn O’Neil in ’12-13 to lead a team to football and basketball titles in the same year. Olpe finished 18-3 and pulled off back-to-back upsets against Little River and South Gray in the semifinals and finals.

“That girls’ program that Jesse has done, he just does a great job with them," Schmidt said. "And for them to come out and get that championship - they didn’t get to finish last year, so they got an opportunity and they took care of business this year, and our kids just followed up. Just a great, great day for our community.”

Nelson is the state’s all-time winningest coach with a 949-111 career record. He has won four state titles, in ’81, ’10 and ’11, all undefeated years. Davis played on his first state team and has served as an assistant for decades. Olpe currently has the state’s longest winning streak for boys or girls.

“The reward for me has always been just watching kids win games that they shouldn’t win,” Nelson said. “And the look on their face when they win big games. I’d do it for free if I could see that all the time.”

Nelson led Olpe’s junior high for many years, too. He recently retired from junior high and is no longer in the school daily. Nelson still puts in substantial time with the high school program.

“Seeing him coach is awesome,” Neleh said. “Like even though he is not in the classroom anymore, seeing him in his element and doing what he loves, it’s really cool to see.”

Typically, Nelson’s strongest teams have permitted around 28 points a contest. In ’10, Olpe allowed 31 points a game. The following year, the Eagles permitted 27 a contest, per MaxPreps archives.

Last season, Olpe posted an average margin of 63.8 points scored to 30.2 points allowed. Kansas switched back to two 1A classifications this winter. This year, Olpe has stayed No. 1 in Class 1A, Division I all year. Central Plains took three losses and won Division II for its seventh straight state title.

“They push us constantly,” Smith said. “And they want us do the best we can, and they are always supporting us, and it’s just awesome having two amazing coaches supporting us, and teaching us how to be good basketball players, but also good people.”

Olpe’s six seniors have played together since elementary school. It marked Olpe’s most seniors in nine years. The ’11-12 squad had nine seniors, from MaxPreps rosters.

Historically, Nelson has ran two posts. Last season, none of the starters were above 5-foot-7. This year, the 5-11 Broyles is the team’s tallest player by three inches. Olpe had an average score of 62.6-23.8.

“This group here, sometimes they like to just give you the ball and go play defense,” Nelson said with his usual smile.

The consistent Bishop can play inside and outside. Heins led Olpe in scoring with around 17 points a contest. Smith, Bishop and Fisher all averaged double figures, too. Neleh noticed Nelson had to “change up plays” and coach in a different style.

“On any given night, somebody could have a great night,” Neleh said. “They are very well-rounded, and it’s a different kind of team that they have really never had before.”

Smith has always been the point guard and signed with Emporia State. She is considered the best point guard under Nelson. An Emporia State signee, Smith finished with 13 points, six steals, five assists and three rebounds and helped hold Norwich to 31 percent shooting.

“I always want my point guards to think like me, but especially by the time they are a senior,” Nelson said. “… We run a lot of different stuff. If I can’t get it in, she’s usually got something better than I had anyway.”

“Obviously really just physical and tough,” Serna said of Olpe in late February. “And I think we started out good, and we had them within three, and the second quarter, we just let them drift away, and we just couldn’t get our motivation back up to keep going. So it was a struggle.”

COVID-19 changed the state tournament. Quarterfinal games were at home sites. Olpe opened with a 91-27 victory versus Rosalia-Flinthills before it came to Dodge City. In Thursday’s semifinal contest, the Eagles defeated Jetmore-Hodgeman County, 38-21. Olpe forced 34 turnovers.

Teams haven’t done a postgame handshake all year because of COVID-19 protocol. However, in a moment of sportsmanship, Klaver crossed midcourt. The two coaches offered words of congratulations to each other.

“They made you work very hard to get an open shot,” Klaver said. “And then once we did get an open shot, I felt we were a little bit rushed on it and caused us to miss some shots that had been going down.”

Schmidt is 130-33 in 14 years as Olpe’s football coach. He is 2-2 all-time in football championships, including a 12-0 record last fall. Schmidt earned 1A Coach of the Year in football, and Olpe led Kansas in scoring defense with just 35 points permitted.

It marked the fewest points permitted by an 11-man team since Smith Center in 2007, according to Prep Power Index. Olpe is well-known for its depth, and senior Jordan Barnard was first team all-state fullback/tight end in the fall. He was also the best player at the 1A-I tournament.

Olpe was ranked tenth in the Division I coaches’ poll in preseason, behind league foe Lebo. The Eagles stood third entering state behind Little River and South Gray.

“They gutted it out,” South Gray coach Mark Applegate said. “I mean, they are athletes.”

“I love the small-town atmosphere,” Olsson said. “You are kind of like a little family.”

On Jan. 19, Olpe defeated a veteran-laden Madison squad, 47-29. For Olsson, it marked a turning point.

“I need to rebound,” Olsson said. “And shut down the post the best that I can, so I think that was really the game that I felt l like I had a role.”

The Eagles went down double figures early and suffered a 47-39 loss to Lebo in the Lyon County tournament championship game on Jan. 30. However, Madison beat Lebo in sub-state. Then, Olpe defeated Madison, 43-27 to advance to state.

Schmidt, also Olpe’s athletic director, stands at 431-137 in 24 years as the Eagle boys’ basketball coach. He led the Eagles to its only previous boys’ basketball state championship appearance, a double-overtime loss to Pittsburg Colgan in 2002.

“He will bite you in the rear end if you do something bad,” Olsson said with a laugh. “But he’s a good coach all around, football and basketball. He’s a great leader for us.”

Schmidt has two habits. Just before state championship tipoff, Schmidt walked out onto the court, inside the arc. He made the sign of the cross with his feet. Schmidt had his customary blue Dallas Cowboys towel draped over his right shoulder. Schmidt has had the towel since he got married and said it’s become “part of me.”

“Every game,” Schmidt said. “I have done it for 25 years. Same thing about wearing this towel.”

Olpe never trailed in the semifinals against Little River. In the finals, the Eagles fought back from a 27-20 halftime deficit.

“We started doing a better job on the offensive end and getting the ball in middle, and then being able to attack or kick out,” Schmidt said. “We just didn’t do that in the first half. We got too much of just dribbling around on the outside. Nobody was aggressive, and that was the biggest thing.”

Barnard led with 17 points, while Hoelting and Redeker each had 10. Sophomore Truman Bailey came off the bench to tally 11 points, including a huge 3 that broke a 39-39 tie midway through the fourth quarter. Olpe was plus-4 on the glass in the second half after minus-3 in the first. Senior Noah Clark, a starter, picked up three boards.

“Give kudos to our seniors,” Hoelting said. “Because they did a lot. Jordan and Noah rebound, Jordan shot well. Chris rebounded very well. Nolan (Redeker) does a lot off the bench to help us on defense, and it was just a great all-around effort.”

After the boys’ postgame ceremony, both Olpe teams gathered on the other side of United Wireless, across from where Neleh Davis sat approximately six hours before. The boys’ team stood on the floor, the girls behind in section 104.

“It was amazing,” Bishop said. “It is the greatest feeling ever. Last year, the world kind of went crazy right about this time, and we didn’t get to see how it would have played out, so to come back and to do what we wanted to do and get this state championship, it’s amazing. And I wouldn’t want to do it with any other girls under any other coach.”