v Craw-Kan Team of the Week: Uniontown Wrestling/Bryce Eck - Sports in Kansas 
Warning: include(../includes/bodytag.php): failed to open stream: No such file or directory in /home/kansass/public_html/ks/news/index.php on line 36 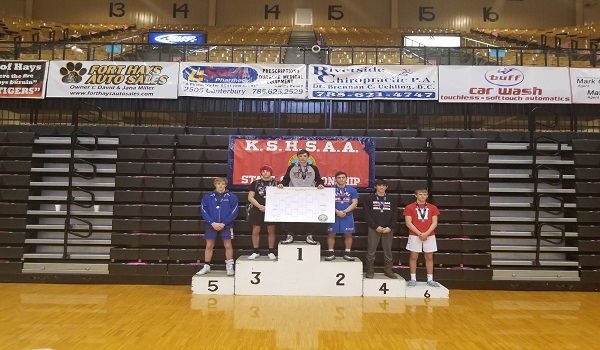 HAYS – Andy and Shanna Eck are ranchers in Redfield, Kan., a town of 124 people located in Bourbon County. The Ecks have three boys: Colt, Bryce and Trent, a seventh grader. The family’s passion is horse riding. Andy earned a rodeo scholarship to Fort Scott and competed professionally. He is currently a well-known pickup man at Professional Rodeo Cowboys Association competitions throughout the country.

Colt is two years older than Bryce. At a young age, the siblings realized wrestling helped with riding horses. Redfield is located 11 miles from 4A Fort Scott and just over six miles from Uniontown, generally a Class 2A school. Redfield is in the Uniontown school district, but the Eagles did not have wrestling.

The Ecks competed for Fort Scott in the kids’ wrestling ranks. When Colt reached around fifth/sixth grade age, the family went to the school board and asked Uniontown to add wrestling. Uniontown did. This winter marked the seventh year of the program, sixth in a row with at least one state qualifier.

“Get it at Uniontown or go to Fort Scott,” Andy Eck said. “It’s been a pretty awesome adventure.”

Colt and Bryce, both known for early morning workouts, have consistently qualified for the Class 3-2-1A state wrestling meet. Colt went as a freshman, sophomore and senior and won more than 90 career matches. Bryce was 19-9 as a freshman and 21-6 last season, though was a combined 3-4 at state.

“We have been wanting that at our school,” Bryce said.

Eck finished 37-2 at 152 pounds. He won by fall in 1 minute, 47 seconds against Hillsboro’s Tristan Rathbone in the quarterfinals. Then, Eck beat Rossvile’s Sam Twombly in the semifinals, 10-3.

In the championship, he won by fall in 2:55 against Eureka’s Brent Escareno.

William Hathaway is Uniontown’s head coach, and Andy serves as the assistant. Eck is the first Uniontown champion either team/individual since Nikki Banwart captured the Class 2A triple jump in 1999, per KSHSAA archives. The last boy titlist was Thad Endicott in the 110 hurdles in Class 2A in 1995.

“It means a lot,” Bryce said. “It means all that hard work that we have been putting in is just paying off.”

Several years ago, Colt and Bryce started the early morning workouts every day except Sunday. The duo calibrates the workouts for each sports season and have increased intensity as they have grown. They also work out at night.

“He has always just put in more work than anybody I know,” coach Eck said. “Him and his brother both, and I think he just stepped it up even more. I am talking the 5 a.m. workouts that no one else wanted to do, and it just prepared him for here on the mat.”

Eck had lost to Escareno by fall in the regional final, and then defeated Escareno, 6-0, in the sub-state final. Eck earned top wrestler honors at the eastern sub-state. In mid-December, Escareno was ranked first at 152 and Eck fifth.

Entering state, Hill City freshman Aiden Amrein was ranked first, Eck second and Escareno third. Escareno pinned Amrein in the semifinals, the first time Amrein had been pinned since fourth grade. For all 3-2-1A wrestlers, Bryce tied for fourth overall with 24 points.

“I just had the mindset that I was going to come in here and win it,” Bryce said.