v Labette Athlete of Month: Frontenac's Landon Dean - Sports in Kansas 
Warning: include(../includes/bodytag.php): failed to open stream: No such file or directory in /home/kansass/public_html/ks/news/index.php on line 36 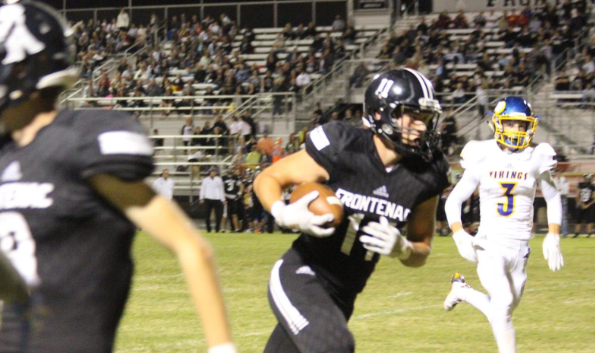 The Kansas high school football Class of 2022 is expected to have double-digit NCAA Division I signings. While the Class of 2020 was known for its offensive linemen group, the 2022 group is highly recognized for its Defensive Ends and Athletes.

While some years the top Kansas players are heavily congregated in one or two geographic regions, the 2022 offers a cross-section across the Sunflower State. The group has produced plenty of news in February, including Frontenac junior strong side defensive end/athlete Landon Dean. He is ranked as Kansas’ No. 5 overall player, per 247 Sports, a recruiting industry leader.

Dean, listed at 6-foot-5, 230 pounds, picked up offers from Oklahoma State, Eastern Michigan, Iowa State and Kansas State. On Feb. 10, Dean committed to Oklahoma State. Dean was the first Frontenac player with a Division I football offer since Broc Ginavan, the 2017 3A Defensive Player of the Year, earned a Wyoming offer.

The last Kansan to sign with OSU was St. Thomas Aquinas offensive lineman Joe Michalski in the Class of 2019. Michalski was the 5A Offensive Player of the Year and the state’s No. 10 recruit in a class that also included quarterback Graham Mertz (Wisconsin starter) and running back Breece Hall, a first team All-American for Iowa State last fall.

The No. 2 player, BVN wide receiver Mekhi Miller committed to Missouri on Jan. 20, 2021. Blue Valley North coach Andy Sims led the program to three state championship games and one state title. Sims also recently moved on when he took a job at Park Hill in Missouri.

Hays High is loaded with Division I players. In the Class of 2021, defensive end Gaven Haselhorst was the state’s fifth-best player and signed with Kansas State. HHS has inside linebacker Gavin Meyers and athlete Jaren Kanak ranked fourth and sixth, respectively, for the Class of 2022.

Meyers just completed his Class 5A wrestling season with a sixth-place finish. Meyers took a highly controversial OT loss in the 5A semifinals. He was first ruled a bout-winning takedown, but the call was reversed by the head official. Meyers eventually lost and went 24-3. He injury defaulted his two backside matches. Meyers collected an Air Force offer on Feb. 27.

Kanak had a Yale offer on Dec. 2. Since Jan. 18, Kanak has offers from Nebraska, Dartmouth, Air Force and Army West Point. Both Meyers and Kanak have at least two Power 5 offers from last year.

Dean helped Frontenac to a 10-1 record and just 85 points allowed, second-best in Class 3A, in the 2019 season. Last fall, Dean helped Frontenac, a team that dealt with COVID-19 issues at the beginning, to a 6-5 record. The Raiders opened 1-3 before five wins in their next six games. Dean helped Frontenac permit 19.9 points per contest. He earned SIK Southeast Kansas Defensive Player of the Year. Dean delivered 76 tackles, 7.5 for loss and a fumble recovery for veteran Raider coach Mark Smith.