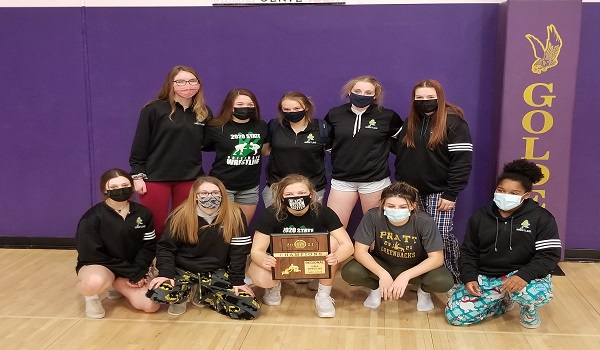 “Parents just weren’t loving people,” Tate said. “It was just a bad situation overall. But she did everything right. She was doing well in school. She was doing all the right things. She just had a really bad home life.”

At 18, Meriam went to live with the Weltons. She has long considered the Weltons her parents. Rocky captured three team wrestling titles at Goodland and six at Garden City. He is part of four Halls of Fame. Welton passed away July 4, 2020 at the age of 83. Meriam is listed as one of his children.

“Kind of took her in for the rest of her life,” Tate said.

Like the Weltons, Tate and Meriam wanted to adopt. Tate, in his 12th year at Pratt, serves as the head girls’ tennis coach and head boys’ and girls’ wrestling coach. At first, the goal was to adopt one child.

“We got into it,” Thompson said earlier this month. “We found out that the hardest to adopt are African-American sibling groups over seven years old, and so we said, ‘Why don’t we go for all three of those things? And we got them.”

This weekend, three of the siblings will compete at the KSHSAA state wrestling championships. In Girls Division II (Classes 4-1A), Pratt is ranked second behind Baldwin by the Kansas Wrestling Coaches Association. The two squads have traded top positions all winter.

Baldwin has qualified six wrestlers, Pratt five, the most in the field. Last year, they combined for four. Baldwin senior Emma Grossoehme, a Baker University volleyball/wrestling signee, is the Bulldogs’ lone returning state qualifier who scored points at state.

The girls’ tournament occurs Friday at the Tony’s Pizza Event Center in Salina with the boys Saturday. This is the second year KSHSAA has sanctioned girls’ wrestling, first time it has split into a pair of classes. Normally, the top-16 wrestlers advance to the state meet. However, this year, COVID-19 and social distancing protocols led to the sub-state round. After regionals, 16 remained in each weight class. Sub-state last weekend cut the brackets to eight for state.

Jadyn, a sophomore, took fifth as a freshman. She is 33-1 and ranked third at 115 this winter. Jadyn has competed in wrestling since third grade. She saw her older brother compete and thought it “was pretty cool to watch.”

Jadyn won a youth state championship in ’15. At one point, she didn’t like wrestling and stepped aside. Jadyn came back and wrestled boys all through junior high.

Jadyn told her father she wasn’t going to wrestle in high school if she had to compete against boys. She, like many girls, elected to come out once the sport was sanctioned.

“We have a relationship as my coach and my dad, and so when are home, he is my dad,” Jadyn said. “But when we are on the wrestling mat, he is my coach, so I have to respect him just like all the other girls have to. So it’s like a double relationship.”

Keimarla, a freshman at 155, is 26-11. She is ranked third. Keimarla, known for athleticism, has shown great strength and calmness.

“She doesn’t really get nervous about stuff,” Tate said. “She just goes out and does exactly what we ask her to do.”

“We were never going to force them to try wrestling or anything, but I think she saw that we were doing well, and it looked like a lot of fun, so she wanted to try it too,” Jadyn said.

Pratt boys are part of a strong classification that is headlined by Andale and defending champion Chanute. Andale has six ranked wrestlers, including No. 1s at 126 with senior Hector Serratos (28-2), 132 with sophomore A.J. Furnish (24-4), and 220-pound senior Cayden Winter (19-0). Andale qualified eight, while Colby, Tonganoxie and Chanute have seven.

“How can you not have the utmost respect for Tate?,” Hoisington coach Dan Schmidt said. “Just works his rear off. He’s all about kids.”

“Their foster parents didn’t even allow them to do sports, so we just have so much fun,” Tate said.

Pratt has never won a wrestling title, boys or girls. Thompson, known for his wearing ties at meets – “he likes to dress up,” Jadyn said – has continually led top-10 finishes.

“I would hope that we all dig deep and work hard to get a state championship as a team,” 143-pound junior Livia Swift said. “That’s been a big goal.”

Pratt girls finished fourth with two qualifiers in 2020: Jadyn and Swift, the 143-pound champion. Pratt boys have eight individual champions with Thompson. They went seventh, eighth, third, sixth and fourth as a team from ’13-19.

“He is one of the crown jewels of high school wrestling,” McPherson coach Doug Kretzer said. “It’s a lot deeper than success on the mat. He’s all about putting these kids in position to be successful in life, and he’s an awesome teacher. He’s a very influential man and a father. I don’t have enough great things to say about him.”

“If there’s anyone in Pratt that is listening to my words, they should all be wrestling for him,” he added. “Every single parent in that town should want their kid being a part of coach Thompson’s tennis team or his wrestling team. He cares about these kids.”

Two years ago, Swift was the lone Greenback girl to finish the season. After last winter, Jadyn and Swift significantly recruited other high schoolers and in the middle school.

Pratt has developed great culture and support that other coaches, including Kretzer, have seen. Swift said “everyone” on the Pratt team has a passion for wrestling. Earlier this season, McPherson and Pratt were at a tournament that had JV boys and varsity girls at the same venue, a common occurrence. The Pratt girls were on the sideline cheering the boys and vice versa. At the Division II Ellis sub-state last week, the Greenback girls were always matside for teammates.

“Both genders are equally as important to him, and it just shines through with the way his team wrestles,” Kretzer, one of the state’s most respected coaches, said. “They have got a camaraderie on the edge of the mat. … They are blowing up every time one of those girls wins, and Pratt has got it really rolling like a depth of team situation, not just on a surface level. Yeah, they are good wrestlers, but their girls care about each other. Their boys care about their girls.”

In addition to Jadyn and Keimarla, Pratt qualified sophomore Lilly Herman (23-14) at 101.

“I think she’s finally found what she is good at, but she finally has like that drive she’s been needing,” Jadyn said of Herman. “We wrestled together through middle school, and so it’s really good to see her like finally just grow this year.”

Senior Payton Woody (28-11) is at 126. Swift, a junior, stands at 29-2 at 143. Swift is 1-2 against Ellis freshman Kaydawn Haag. They split in the regional and sub-state championships the last two weekends. Swift and Haag could meet for the championship this weekend. In January, Swift was ranked No. 25 nationally. Keimarla is Swift’s training partner.

“She has got to be one of the strongest girls that I have ever wrestled, which I think you can see when she wrestles other people,” Swift said. “She works really hard. She is really tough. I can kind of imagine it’s kind of hard to be my partner somedays.

“Because when we go live in the room, I don’t know who she is, and we are both that way,” Swift added. “And we go at it, and sometimes it does get tough, but we know we are both getting better, and that’s just the goal.”

Hoxie coach Mike Porsch has coached more than a quarter century with the Indians. His older two sons, Tristan and Dayton, combined for six state titles. Hoxie has 10 overall team crowns, the last in ’02-03. Since 2010, Hoxie has won at least one individual title every season.

Since ’11, the Indians have three seconds and three thirds for boys’ team finishes. This winter, Hoxie is the heavy favorite to win 3-2-1A boys, held Saturday at Gross Memorial Coliseum in Hays. The Indians qualified nine wrestlers, most in the field.

Hoxie captured six sub-state titles, including 106-pound Tate Weimer (34-9), 113-pound Wayne Shepard (36-8) and 120-pound Carson Ochs (35-7). Weimer and Shepard both defeated wrestlers they had lost to earlier in the season.

“For the most part wrestled pretty well all year long,” Porsch said. “And sometimes you get a little nervous when you start out on fire that you lose a little bit of that, and maybe that happened a little bit to us last year. We wrestled really good at regionals and a little maybe flat at state. Maybe dropped a match or two that we didn’t think we should or didn’t plan on for sure. So that’s kind of been something we’ve talked about or has been in the back of the kids’ minds is trying to wrestle better every week.”

As well, Porsch has kept a close eye on the girls’ side.

His daughter, Marissa, finished fourth last winter in her first season of wrestling. This year, Marysville senior Elise Rose and Marissa are ranked 1-2, respectively at 132 pounds in Division II. Overall, he has watched the girls continually improve. Porsch calls Paola senior Jordyn Knecht, No. 1 ranked at 126 and undefeated the last two years, probably the state’s best girl wrestler with a 33-0 mark. Rose is close behind.

“Last year and maybe at the start of this year to watch them improve as fast as they are is really fun,” Porsch said of girls’ wrestling. “Those girls just seem to be sponges, eating up good technique and different technique.”

Porsch, like many coaches, has seen higher quality athleticism from the girls this winter, especially with Pratt. Several weight classes have multiple wrestlers that are legit state title contenders. At 115, Jadyn is expected to battle with Lakin junior Isabell Ortiz (26-4), Independence’s Alexis Allen (20-1), and Burlington junior E’owynn Codney (29-5). Thompson is 4-1 against Ortiz winter. Codney upset Allen at sub-state for Allen’s first loss in two years.

Herman is ranked sixth in a deep 101 class. Oakley sophomore Citori Bosserman (24-1) is the favorite after she was not a state qualifier last winter. At 143, Haag, Swift, and WaKeeney-Trego senior Sydney Boyle have been ranked 1-2-3 in some order all year, though Grossoehme (34-4) is ranked fourth. At 155, Ottawa senior Darby Weidl (23-2) and McPherson junior Holli Giddings (30-1) are the favorites, and Keimarla is ranked third.

Much of Baldwin’s potential for a state championship comes at 170. Freshman Hayleigh Wempe (31-4) is ranked first, Council Grove sophomore Jolie Ziegler (11-1) and Larned junior Ava Mull (27-1). Mull won an unofficial title in ’19. She was disqualified in the ’20 regionals and didn’t reach state. Ziegler beat Mull in ultimate tiebreaker in the Ellis sub-state final.

“Their success speaks for itself,” Porsch said. “Man, (Thompson) has got a lot of good athletic girls there. That’s one thing I have noticed, is maybe the athleticism of the girls that are coming out now is improved even from last year.”

That depth has led to a terrific postseason for the Greenback girls, a run that could yield a state title.

Coach Thompson has earned multiple postseason awards, including top coach honors at the WaKeeney regional and Ellis sub-state. After the WaKeeney regional finished, Thompson stood matside and thought about coach Welton, who battled severe health in his last year. He never had the opportunity to see the rise of the Pratt girls this winter, nor the quick growth of girls’ wrestling. Nearly 1,000 girls participated in Kansas wrestling this winter, a continued exponential improvement.

“He would love it,” Thompson said. “All these wrestlers out there.”