v Craw-Kan Team of the Week: Columbus Girls' Wrestling - Sports in Kansas 
Warning: include(../includes/bodytag.php): failed to open stream: No such file or directory in /home/kansass/public_html/ks/news/index.php on line 36 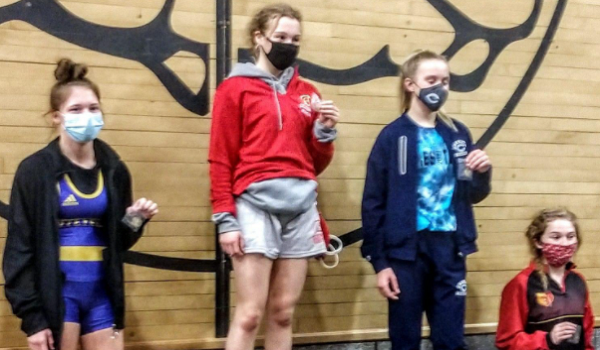 The victory continued to set plenty of history for the Titan program – and has exemplified the continued growth of girls’ wrestling in Kansas this season.

Columbus has one senior, 138-pound Dixee Lacen, a Barton County Community College cross country signee. Lacen had played in 38 varsity basketball games the last two winters before she switched to wrestling. She collected a district championship.

Sophomore 109-pounder Addison Saporito (21-5) captured a district title with a bye, a win by fall in 26 seconds and a 9-7 victory. Saporito was named the school’s top Titan for her class for February.

Last year, Saporito was one of three Titan wrestlers to compete at regionals and the only one to reach the inaugural KSHSAA girls’ state tournament. The competition featured all six classes.

This winter, in part because of coronavirus social distancing measures and high numbers of girls’ wrestling, the sport split into Division I and Division II. Division I is 5A/6A schools, and Division II is the lower classes. Columbus is historically a 3A school. As well, the playoff format changed for several classifications to include districts, regionals, sub-state and state instead of the normal regionals and state.

Columbus remained out of the top-10 in the Division II rankings in the Feb. 9 poll, a group that features Pratt, Paola, Ellis, Baldwin, Oakley, Fort Scott, Hoisington, Abilene, Burlington and Ottawa. In particular, Columbus has defeated Burlington and Ottawa this year. Saporito remains the lone Titan ranked at fourth at 109 pounds.

On Saturday, Columbus is part of the Burlington regional that includes Paola and Ottawa. After the weekend, 16 wrestlers will be left in each classification, normally the number for the state tournament. This year, sub-state will narrow the state tournament down to eight per class.

Saporito, 132-pound junior Emily Welch and Lacen were all No. 1 seeds and won district titles. Saporito and Welch were the lone returning Titans that competed at regionals last winter.

At 115 in districts, freshman Sophie Lloyd (13-12) placed fourth with a 2-2 record. In the semifinals, she faced Independence’s Alexis Allen, a defending state champion and undefeated this winter and took a competitive 4-0 loss. At 120, freshman Lizzy Welch (10-10) earned a fifth-place showing.

For 143, freshman Brooklyn Lima (11-11) earned third with a 3-1 showing that included three wins after she lost her first-round match. At 191, junior Destiny Lima (6-6) finished second.

On Jan. 25, 2020, Columbus girls wrestling was sixth at the Paola Invitational with 39 points. Columbus had four girls entered in the competition: 101-pounder Trinity Brumback, Saporito at 109, Emily Welch at 143, and Destiny Lima at 170.

At the Feb. 15 East regional, Columbus tied for 25th with 35 points. The Titans had three wrestlers compete at regionals. Brumback, who finished with a sub-.500 record, was in the 101 bracket. Saporito recorded a fourth-place finish and became the first Titan to qualify for the state tournament. Welch went 3-1 at regionals and 13-6 overall at 143 and nearly qualified for state.

At the all-classes state tournament, Saporito went 0-2, including a consolation round loss in overtime, and finished 12-9 at 109. This year, Columbus has enjoyed success from the start. In the season-opening tournament, Columbus went 14-0 with 14 pins.

On Dec. 11, Columbus won the Bentonville West tournament in Arkansas. Columbus finished with eight top-four finishes. That included a gold from Welch, silver by Lacen and bronzes from Saporito, Jailyn Rodriguez at 150 and Destiny Lima.

At the Jan. 16 Burlington tournament, Columbus brought home a second-place finish, only behind then-No. 8 ranked Shawnee Heights, a Division I school.

On Jan. 22, the Titan girls celebrated Senior Night. Columbus picked up the first dual win in school history when it defeated Labette County, 36-24.