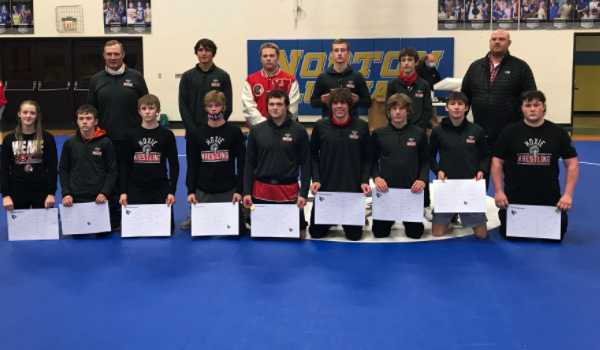 For many programs, last week marked a league tournament and/or the final week of regular season competition. COVID-19 protocol significantly changed the postseason landscape. This Friday features the girls’ Division II (smaller classifications) district tournaments. Saturday has the boys’ 4A and 3-2-1A district tournaments. The top-four placers will advance to the regional round and receive medals.

Then, Feb. 12-13 will feature regional tournaments, and Feb. 19-20 will have sub-state competitions. State will feature eight wrestlers per class rather than the normal 16. SIK will have a more detailed regional look later this week, but we highlight several major tournaments, including the Mid-Continent League and Garden City’s Rocky Welton, plus plenty of milestones. Rankings as of Feb. 1.

Hoxie, ranked first in Class 3-2-1A, easily won the Mid-Continent League wrestling tournament with 228 points. Ellis was second at 137.5, Smith Center third with 124.5 and Plainville fourth with 107. Hill City took fifth with 95.5 points. HC is ranked second in 3-2-1A and Norton stands eighth.

Hoxie has its great strength at the middle weights. Dayton Bell (32-2) took first at 126 with a win by fall in the final against Smith Center’s Bentley Montgomery.

Drew Bell improved to 34-0 at 132. He beat Norton’s Kolton Field, 14-9, in the first-place match. Field took his first loss and moved to 23-1. Both Drew Bell and Field are defending state champions.

Field is ranked first at 126, and Dayton Bell second. Drew Bell is first at 132.

Drew Bretz (32-2) finished second at 138. Oakley’s Eric Cain improved to 24-1 with a 6-2 championship match victory against Bretz. Derek Johnson, also a defending state titlist, improved to 31-0 at 145. Johnson captured all three of his matches by fall in 2 minutes, 47 seconds or less.

Baalman is ranked second at 160.

Porsch is ranked second at 132 behind Marysville’s Elise Rose, who has been a nationally ranked wrestler and was a state runner-up last winter.

Ellis standout freshman Mason Younger captured the 106-pound title including a 5-0 win versus Weimer. Younger is 25-1 and has been taken down once this year. Hill City’s top wrestler, Carter Underhill, suffered injury and did not compete at league. Younger is ranked third, Underhill second and Jayhawk-Linn’s Corbin White is first. Underhill is the only wrestler to beat Younger at the Dec. 5 Osborne tournament.

Norton’s Gavin Sproul led the field with 30 points, while Amrein and Hoxie’s Donovan Balluch tied for second place with 28 points. Eric Cain tallied 27.5, and Drew Bell finished with 26. Sproul is fifth at 220.

Valley Center’s Alyeus Craig earned Outstanding Wrester at the Rocky Welton in Garden City. He defeated the three-time Nebraska state champion, 5-0, in the finals. At 126, Craig improved to 29-0. He won by technical fall, 19-6 major decision and then beat Paul Garcia, 5-0. Garcia, from Scottsbluff (Neb.), is 28-2. Craig is ranked first in 5A.

Generally, the 63rd annual Rocky Welton tournament has around 40 teams and is one of, if not Kansas’ best regular season competition. This year, COVID-19 restrictions severely cut the teams to just eight. Generally, many strong Colorado schools and Blue Valley Southwest, a top Kansas squad, competes.

Goddard is first in 5A, Newton ninth in 5A. Dodge City is second in 6A behind Washburn Rural. Garden City is sixth in 6A.

In 5A, Glover is ranked fifth, Miller is third and Rothenberger stands fifth.

Fisher and Craine are both ranked fifth, and Davidson is second.

In a big 5A matchup at 106, Newton’s Nick Treaster defeated Great Bend’s Kaden Spragis, 7-1. Spragis is 29-2, and Treaster stands at 23-1. Treaster and Spragis are ranked first and second, respectively.

GB’s Avery Wolf finished second at 113. In the finals, he lost to Kearney’s Archer Heelan. Wolf is ranked fifth.

Wyatt Weber (22-2) finished second at 138. He lost to Garden City’s Erick Dominguez, 5-1, in the championship. Dominguez improved to 12-2. Dominguez and 285-pounder Sebastian Lopez (13-4) were Garden City’s lone champions. Lopez picked up a 1-0 ultimate tiebreaker victory against Newton’s Gomez, who is 24-4.

Weber is ranked fifth in 5A, and Dominguez is first at 138.

Scott Heilman took second at 182. In the finals, Heilman lost by fall to Goddard’s Logan Davidson. He stands at 18-10, and Davidson is 23-1.

Schanz back for Mulvane

Mulvane’s Kammie Schanz was a state runner-up to Pratt’s Livia Swift in the closest state championship match of the inaugural girls’ state tournament last winter. Schanz had some injury and COVID-19 issues and has had a limited season.

Other champions included Andover Central’s Jordan Burford and Wellington’s Kaitlyn Hain at 126 and 132, respectively. Hain, a junior, is 24-0 and is ranked third in Division II behind Marysville’s Rose and Hoxie’s Porsch.

Goddard’s Ashlyn Goodwin is 5-0 and won the title at 138. Andover Central senior Jaquelyn Tschohl improved to 16-3 with a title at 155. She is ranked second behind Washburn Rural’s Rebekah Smith.

Douglass junior standout Jewella Cokeley improved to 10-1 with a title at 170. Coakley is ranked fifth. In the 191-235 classification, Buhler’s Emilie Schweizer was first and Nickerson’s Maddi Miller finished second. Miller is ranked fourth at 191, and Schweizer is third at 235.

Andover wins own tournament on boys’ side, Pratt captures girls’ division at Andover

In its own tournament, Andover boys won the 11-team boy division with 232 points and Derby took second with 185. Rose Hill was third with 156, and Pratt at 150. Andover is ranked eighth in 5A.

The girls’ side featured six teams and Pratt won with 150 points. Derby was second at 66. Pratt is first in Division II ahead of Baldwin.

For Andover, Landry Root (20-3) finished at 113. He went 5-0 with all wins by fall, including a championship in 3:14 in the championship game. Root is ranked fourth.

Blick is ranked fourth in 5A, and Weber is second in 4A.

At 220, Ashton Ngo, who recently committed to Hutchinson Community College after a standout all-state career for the Trojans, took second at 220. He improved to 21-3 and lost to Wichita Northwest’s Mason Ross, who stands at 18-1 this year.

Kapaun’s Wright and Nathan Fury, along with Andover’s Root, Rose Hill’s Keegan Beavers, and Salina South’s Brandon Jeffries led the field with five pins. Ross finished with four pins. Fury is ranked third in 5A at 170. A senior, Jeffries is ranked fourth at 182 in 5A.

Jeffries paces Salina South with 34 wins, 31 falls, and 36 takedowns, according to team statistics. Deacon McDonald paces the Cougars with 24 escapes. At the Andover tournament, Jeffries finished 5-0 and captured the title at 182 pounds for South’s lone champion.

Thompson and Smith led the girls’ field with four wins by fall.

Topeka Seaman named Garrett Griffin and Alex Cannon as the team’s boys’ and girls’ wrestlers of the week.

Basehor-Linwood’s senior Olivia O’Donnell earned plenty of team honors this past week. She marked the first B-L girl to 50 career victories, the first three-time Ladycat Champion, and the first Bobcat girl to achieve a No. 1 ranking. The Ladycat tournament is one of the larger and more prestigious girls’ competitions every year.

Dodge City girls went to Larned and had champions from Ariana DeLaRosa, Dayanara Garcia, Ashley Arroyo and Sindy Gutierrez. DeLaRosa, a freshman, is ranked fifth at 120 in Division I. Garcia, another freshman, is fifth at 138. Overall, DC has five ranked wrestlers.