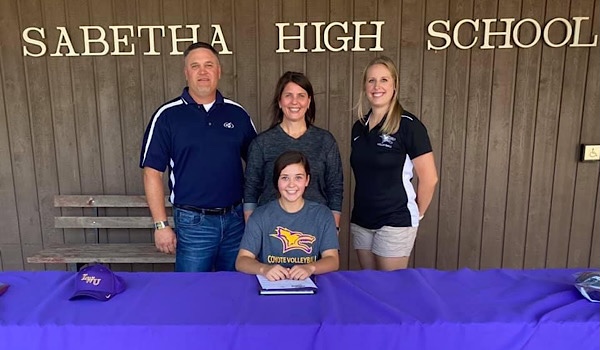 For 2020, Schumann collected first team all-state from the Kansas Volleyball Coaches Association. Sabetha, which advanced to state for the first time since ’99, posted 33-9 and 41-1 records in ’19 and ’20. Both seasons set school marks for single season victories.

Schumann paced Sabetha with 473 digs, 399 kills and .288 hitting percentage. She has signed with Kansas Wesleyan for volleyball. Sabetha beat Smoky Valley, 25-19, 25-27, 25-23, in the championship. Sabetha coach Abby Stueve earned 3A Coach of the Year.

“Ball sense, true and true ball sense,” Stueve told SIK in the fall. “She can read exactly what’s going to happen before anybody else. She can get to the ball anywhere on the court. It’s truly amazing what she brings in that sense, and then her communication about what’s going to happen with that ball. She’s just anticipates like I have never seen before. I think that’s really her gift.”

This winter, Schumann has continued her decorated career. In late January, Sabetha captured the Burlington Invitational for the third straight season. In the finals, Sabetha defeated Rock Creek, 39-30.

Schumann and senior Leah Renyer tied for the Bluejay high with 12 points. Overall, Schumann scored 39 points in the tournament and collected Burlington Tournament MVP honors for a third straight year.

Sabetha is 9-1 and ranked fifth in Class 3A by the Kansas Basketball Coaches Association. The Bluejays are a collective 50-2 in volleyball and basketball thus far in the ’20-21 school year.

Nemaha Central, Sabetha and Royal Valley (9-2) lead the Sabetha sub-state that has five teams with winning records. Sabetha is expected to play Royal Valley on Monday.

Overall, Schumann averages 13.1 points and 2.6 steals a contest after the Burlington tournament, according to Big 7 statistics accumulated by MSC Sports. Sabetha has posted the best scoring defense in the conference with 26.8 points allowed a contest. Last winter, Schumann averaged 13.2 points and 5.4 rebounds a game. She delivered 8.7 points per game as a sophomore.

As a freshman, Schumann finished with 34 points and eight treys at the tournament.

She tallied 35 points in the tournament her sophomore year, a season when Sabetha entered Burlington as the No. 4 seed. Before then, Sabetha had not won Burlington since 2012, nor reached a final since ’16. Sabetha upset top-seeded Labette County, 48-31, in the semifinals, and then beat host Burlington, 42-29, in the finals. Schumann tallied 14 points versus Burlington.

This winter, Sabetha defeated Paola (45-28), Independence (54-26) and Rock Creek. RC is 8-3. In addition to Schumann, Renyer and Nicole Stallbaumer were named to the all-tournament team.