v American Implement Team of the Week: Hugoton Boys BB - Sports in Kansas 
Warning: include(../includes/bodytag.php): failed to open stream: No such file or directory in /home/kansass/public_html/ks/news/index.php on line 36 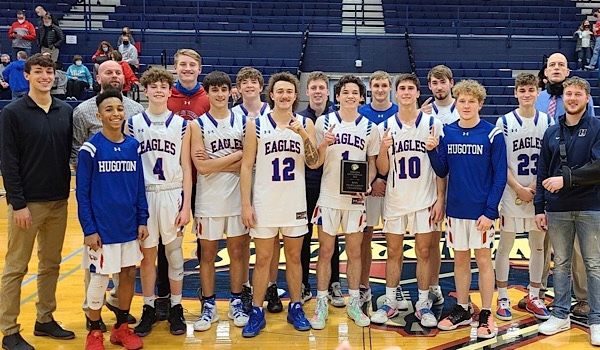 C.J. Korf was already Hugoton’s athletic director when he took over as boys’ basketball coach for the 2015-16 season. That winter, Hugoton advanced to state for the first time since 1951. The Eagles went 23-2 and enjoyed the best finish in school annals with a Class 4A, Division II state runner-up to Wichita Collegiate.

That season, Hugoton averaged 1.05 points per possession. The Eagles shot 35 percent on 3-pointers; 27 percent of the team’s shots came from beyond the arc. Hugoton never made more than eight 3s in a game.

Since then, Hugoton has steadily shot more treys. Last winter, Hugoton set a school record with 14 made 3-pointers on 29 attempts in a 74-67 victory versus Class 6A Garden City.

This year, Hugoton has continued to up its 3-point shooting – and set another school record last week at the Sterling Invitational. The more 3s yielded a Sterling tournament championship, an eight-game winning streak and quietly one of the Kansas’ most offensively efficient and hottest teams.

In the tournament’s first round, Hugoton defeated Smoky Valley, 67-34. Hugoton went 12 of 26 (46 percent) from beyond the arc. Last Thursday, the Eagles defeated host Sterling, 69-48. Hugoton finished 15 of 20 from beyond the arc and broke the school mark for 3-pointers made in a single game. Haden Daharsh scored 16 points on 4 of 4 beyond the arc.

Jayce Korf tallied 11 points on 3 of 4 on treys, and Ryle Riddlesperger came off the bench to collect nine points on 3 of 3. Sawyer Harper scored nine points with 2 of 2 treys, along with eight rebounds, four blocks and three assists. Sterling was ranked fifth in 2A boys, and Hugoton was unranked in 3A.

In the final Friday, Hugoton faced Hutchinson Trinity, ranked seventh in 2A. Hugoton defeated the Celtics, 73-60. Hugoton delivered 10 of 24 from beyond the arc. Harper finished with 24 points, Korf tallied 21 and Riddlesperger scored 16.

Harper was 2 of 5, Korf 3 of 7, and Riddlesperger finished 4 of 6 from 3-point range. This marked Hugoton’s third Sterling tournament championship, joining ’16 and ‘17.

Last season, Hugoton finished 1-2 at Sterling that featured a 64-61 loss to Hutchinson Trinity.

The championship win marked Hugoton’s seventh in a row after an 0-2 start. On Tuesday, the experienced Eagles moved to 8-2 with a 67-47 win versus a struggling Scott City team in GWAC play. For the first time, Hugoton opened the year at the Hays City Shoot-Out.

Hugoton opened with a 22-point loss to Hays High, then unranked, though currently the No. 1-ranked team in Class 5A. Hugoton then fell, 62-59, to Thomas More Prep-Marian. TMP is currently 9-3 with all losses to undefeated teams that are ranked No. 1 in a classification (one to Hays High, two to 2A Hoxie).

Since then, all eight of Hugoton’s wins have come by double figures. Hugoton remained unranked in the latest Kansas Basketball Coaches Association poll released Jan. 26. Hugoton has an experienced group that returned its top-four scorers from a 17-5 squad.

Korf, Harper, Daharsh and Wyatt Angell, all seniors this winter, averaged between 10.6 and 12.1 points per contest last year. Riddlesperger has enjoyed sizable improvement this season after he tallied one point a game in 11 varsity contests as a freshman. He was 3 of 9 on treys.

Angell is excellent at taking care of the ball with a 43/17 assist to turnover ratio. Daharsh leads with 70 rebounds. Harper leads Hugoton with 22 deflections, 25 steals and three charges taken.

After the tournament, Hugoton averaged 65.4 points per contest and 44 percent of all its shots were treys. The Eagles’ 1.05 points per possession thus far matches the ’15-16 team – and is Hugoton’s most efficient offense since that season.

The greater frequency of attempted and made 3s has yielded an uptick in offensive efficiency. Hugoton was consistent after the runner-up year. The Eagles averaged .96, .98, .94 and .996 points per possession before the jump this winter.

Additionally, the Hugoton girls won its third Sterling Invitational title after crowns in ’17 and ’20. In the finals, Hugoton beat Sterling, 65-44. The Black Bears are still ranked No. 1 in 2A. Hugoton is up to fourth in 3A. The Eagle girls, featured on SIK this winter, are 10-0, according to KSHSAA results.