v Cheylin boys go from unranked to No. 2 in 1A-II - Sports in Kansas 
Warning: include(../includes/bodytag.php): failed to open stream: No such file or directory in /home/kansass/public_html/ks/news/index.php on line 36

Cheylin boys go from unranked to No. 2 in 1A-II

Cheylin, who won 6M football, also having a lot of success in basketball. 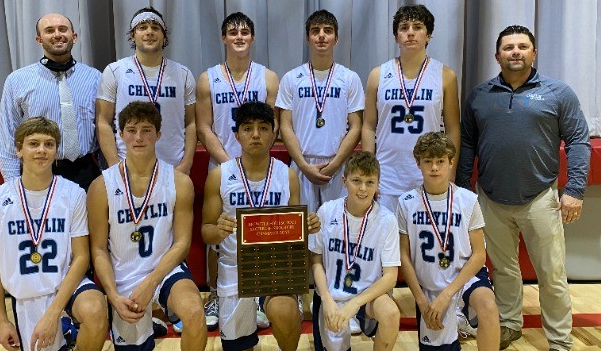 Max Keltz was a beloved figure at Bird City-Cheylin. Keltz, known for his jolly personality, came to Bird City after he graduated from Kansas State with an agricultural degree.

Max and his wife Denise raised four children on the family farm around 10-plus miles south of Bird City. The Keltz’s closest neighbor was the Walden farm, four miles away. Caleb, the Keltz’s oldest child, rode the bus from kindergarten onward with Chris Walden.

“We did a lot of things together just being two farm families,” Walden said.

In 2010, Caleb Keltz served as Cheylin’s eight-man all-state quarterback and accounted for 24 touchdowns. Walden was Cheylin’s leading receiver with 15 catches for 325 yards and seven scores. The Cougars finished 10-1 in Eight-Man, Division II, still the school record for single season victories.

Keltz coached two more football seasons in ’11 and ’12 and went a combined 13-6, according to Kansas Football History archives. Two other coaches followed. In ’16, Walden took over as head football coach and posted a 3-6 record. This past fall, Walden led Cheylin to the six-man state football title.

He looked to Keltz as a friend and mentor. That foundation has helped Walden, in his first winter as Cheylin’s boys’ basketball coach, lead the Cougars to a 5-1 start. Walden was pressed into duty when the Cougars had trouble finding a coach.

Cheylin was unranked in the preseason and is currently No. 2 in Class 1A, Division II. The Cougars won the Sagebrush tournament in mid-December with back-to-back overtime victories. Cheylin is one of several teams that has vaulted into the rankings after the first month of basketball. The Cougars and Mulvane boys (No. 2 in 4A) are the two highest ranked teams, boys or girls, among squads that were not ranked in the preseason.

“He’s a guy that’s always doing what’s best for the kids, and always has kind words for everybody,” Walden said. “Very positive, very reassuring person, and then when I moved home and started teaching and coaching back here at Cheylin, it was a really neat time for me to kind of get to watch him and the way he coaches and take some of his strategies and some of his mantras and personality traits.”

Keltz had two boys and two girls. He coached both of his daughters as Cheylin’s girls’ basketball coach from ’12-13 to ’17-18. Then, Keltz led boys’ basketball the last two winters. Walden built Cheylin into a six-man football powerhouse with a combined 18-1 record the last two falls. The Cougars finished as state runner-up and state champion in ’19 and ’20, respectively. The latter marked the Cougars’ first athletic state title in any sport.

In the spring, Keltz announced his retirement. On May 20, the Cheylin alumni Facebook page called Keltz a “great role model,” and one who went the “extra mile” and taught life lessons beyond the classroom. In addition to football, Walden has coached middle school basketball the last four years and currently serves as the Cougars’ athletic director.

“Very hard person to replace,” Walden said. “I mean, he did a lot of things that weren’t asked of him. Did a lot of things that he didn’t need to. … He has had a very, very big impact on our school, our kids and myself included, being a student and now taking over some of his old positions here at the school.”

At Cheylin’s June board meeting, the school district honored Keltz for his service, and named a new boys’ basketball coach. Cheylin had posted a 6-15 record last winter and has not been over .500 since ’12-13. However, the coaching search fell through. After the 9-0 football season, Walden was unsure who would coach boys’ basketball.

He eventually stepped in for Keltz.

“We had some guys interested then ended up not being able to work out,” Walden said. “Got to that first day of practice, and we kind of were not sure, and then I stepped up just mainly as my athletic director role, and said, ‘I will coach them for now until we can find someone else. If someone else wants this, they can take it.’ And it ended up me kind of getting ushered into the head coaching position.”

Cheylin has plenty of experience with seniors Colton McCarty and Andrew Schields. The Cougars have 10 total basketball players. McCarty is the Cougars’ tallest at 6-foot-1; Walden labeled him the team’s lone post threat. He leads with 19.2 points, 10.2 rebounds and 3.2 assists a contest. Schields is at 14.3 points and 7.5 rebounds. Both are highly decorated in football, too. McCarty is the two-time Six-Man Offensive Player of the Year and signed Tuesday to play college football at NAIA Bethel. McCarty had multiple football offers, though Bethel was the first to offer.

In basketball, Cheylin generally plays just six: the seniors, freshmen Logan McCarty, Pablo Bermudez, and Brady Ketzner, junior Dylan Ketzner, and sophomore John Serrano. Known for athleticism, all five basketball starters are between 5-foot-11 and 6-1. Walden has stressed shooting 3s and layups. A key mantra is being better conditioned than the opponent; Walden said that helped in the tournament.

“I was excited to see them have some almost instant success on the basketball court,” Walden said. “And that’s a group that’s very accustomed to winning and winning a lot, having a lot of success playing football, and it gave me a lot of pride, and a lot of enjoyment for them knowing that they are having the same success now in basketball season.”

Walden asked Mike McCarty, Colton and Logan’s father, to come along as assistant coach. Walden and Mike have coached football together as offensive and defensive coordinator respectively the last two falls.

“He’s very smart, very inquisitive,” Walden said. “He learns quick on the fly and will do his own research and stuff to find things out.”

Cheylin opened with wins versus Northern Valley and Wallace County, and then went to the Sagebrush tournament in Brewster. The Cougars were the fifth seed and faced Triplains-Brewster in the first round. T-B was the fourth seed and then-ranked eighth in Division II. Cheylin won 62-31.

In the semifinals, the Cougars faced top-seeded Leoti-Wichita County. Both squads returned nearly the same teams from last winter when WC had beaten the Cougars, 75-37.

“My nerves were pretty worn out after the weekend,” Walden said.

SF was ranked first in Division II and went to state last winter. St. Francis held a distinct size advantage with posts Jesse Baxter and Colton Neitzel. Overall, Cheylin shot 57 percent from the field, 47 percent from 3-point range. Cheylin ended a seven-game losing streak to SF that dated back to Feb. 2015. All of the losses were by at least 14 points.

“We shot the ball really well,” Walden said. “We played great inside post defense on their big guys, kind of got them in foul trouble.”

Cheylin could become the first Cougar boys’ team to reach a state tournament in 40 years, a final four showing that also represents the best finish in school annals, according to historian Carol Swenson. Cheylin boys also reached in ’79. The girls’ lone two trips are in ’79 and ’80.

“We are not a tall team, but we are athletic, and we have five kids out there that can shoot the ball really well,” Walden said.

Mulvane, Lakin Natoma boys, Osborne girls highlight other teams that have moved into the rankings

Fourteen girls’ programs that were not ranked in the preseason are currently ranked in the Dec. 22 poll. All seven classes had at least one new team ranked. Nine of the 14 squads are ranked either ninth or tenth.

That includes No. 10 Liberal in Class 6A, which has won 28 straight contests. In 5A, Basehor-Linwood is ninth and Gardner-Edgerton stands tenth. B-L guard Addison Penegar committed to Missouri Valley College on Dec. 4. Penegar is Basehor’s all-time leader in season and career treys.

In southeast Kansas, No. 8 Labette County bumped into the Class 4A rankings.

By far the biggest changes came in Class 1A, Division I. New teams are third-ranked Norwich, No. 5 Osborne, No. 6 Doniphan West, No. 7 Ingalls and No. 9 Bucklin.

Osborne, with one senior, is 5-0. The Bulldogs feature 20.2 points per game from sophomore Trinity Lutters and 10 points a game from freshman Gracie Riner. Bucklin senior Catherine Bowman has averaged 21.5 points and nine rebounds per game and has 912 career points.

The boys’ side featured 13 new teams into rankings. Four of the new teams are either ninth or tenth.

Only Class 1A, Division I featured the same teams as the preseason poll. However, that class went through a big change when Little River quickly moved from ninth to first after the first ranking. LR is the classification’s clear favorite and returns senior Jayden Garrison, the 1A Player of the Year.

Class 4A has No. 2 Mulvane and No. 3 Abilene. Mulvane is off to its best start since the ’86-87 season at 5-0. Senior Trey Abasolo has recently committed to NAIA Southwestern College. He has tallied 1,160 career points. (Check out more on the Abasolo family next week at SIK).

In Class 3A, Lakin, known for its constant pressing, is up to fifth and has won the Goodland tournament. Hunter Davis has 21.6 points and 6.4 assists per contest. Jace Bachman has 13.6 points and Servando Gonzalez has delivered 13.2. Lakin, with zero home games thus far, is 5-0. The Broncs have been very offensively efficient with 59 percent on 2s, 36 percent on treys and 81 percent from the free throw line.

Overall, Lakin has turnovers on just 17 percent of possessions, 1.11 points per possession on 65 possessions per game.

For 2A, experienced Ellis captured the Castle Rock tournament and moved into the rankings at No. 7. The Railroaders are 6-0, including wins against Hill City, Wheatland-Grinnell and Ellinwood; the latter two have been ranked.

In addition to Cheylin, the Twin Valley League now has two schools in the Division II rankings with No. 3 Hanover and No. 6 Axtell. Tenth-ranked Natoma is a surprise team. Natoma coach Chris Broeckelman has the Tigers off to a 4-1 start.

Broeckelman, the longtime Natoma industrial arts teacher, has served in various coaching capacities, including several junior high positions and head varsity volleyball coach. After a season-opening 52-51 loss to Western Plains/Healy, Natoma has won four in a row. That includes against Pawnee Heights, 62-32, on Dec. 11, and 53-40 versus Logan-Palco on Dec. 18. PH was ninth in the preseason and L-P had second in the preseason and ranked fifth in the Dec. 15 rankings.

Like Cheylin, Natoma has a small roster. Nine players have appeared in a varsity game, and the Tigers go six deep with seniors Jayce Dickerson and Jayson Engling, along with juniors Kayden Martinez, Tracen Frye and Derek George. Sophomore Javon Letsch has seen time. Dickerson, Engling and Martinez all average between 12 and 14 points per game, and Frye has five steals a contest. Natoma has not been over .500 since a 12-11 season in ’13-14.