v CP's 138-game streak ends with Phillipsburg's rise - Sports in Kansas 
Warning: include(../includes/bodytag.php): failed to open stream: No such file or directory in /home/kansass/public_html/ks/news/index.php on line 36 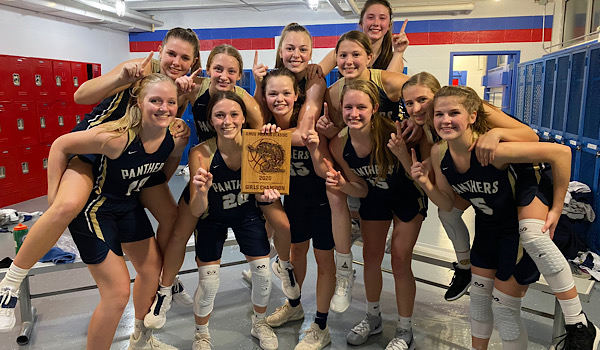 RUSSELL – Phillipsburg had faced Claflin-Central Plains five times in the Russell tournament in the previous seven seasons. The Oilers won by 14 in 2013, and then picked up a 33-point victory in 2015. Three years later, to Phillipsburg’s chagrin, a bracket quirk caused the Panthers to face Central Plains twice in a week at Russell. The Panthers fell by a combined score of 137-38.

Last winter, Phillipsburg was expected to take a sizable jump with standout freshmen Taryn Sides and Heather Schemper. The Panthers captured the season opener versus Ellis, and Schemper delivered a near double-double. Then, Schemper missed the rest of the winter with a knee injury.

CP set a bevy of Kansas records, including scoring defense and average margin of victory. The Oilers broke their own marks for those two categories from the previous year.

Phillipsburg opened the winter with a 64-28 win versus Oakley, and defeated Ulysses, 62-26, in the Russell tournament quarterfinals last Tuesday.

That set up the rematch last Friday versus Central Plains, which had bumped its winning streak to 138. Phillipsburg coach Rachel Miller reminded her team it didn’t have any pressure and to play aggressively from the start. Phillipsburg was ranked No. 6 in Class 3A, Central Plains first in Class 1A, Division II. The Panthers were up for the challenge.

“This year was just a little bit different,” Miller said. “The team had a different mentality. I think we would have played the game Wednesday if you would have let us. They were just really ready to go. They were confident in their ability to go out and compete, and I think they wanted a chance to kind of see where they stack up. Who wouldn’t want to go out and play the best of the best?”

Sides guarded Hammeke and picked up her third foul with 5 minutes, 58 seconds left in the first half, the first time she’d ever been in foul trouble. Miller altered defensive assignments and kept Sides in the game. Shortly after Sides stayed, Phillipsburg went on an 8-0 run and led by five at halftime.

Phillipsburg never relinquished the lead and captured an historic 49-44 victory Friday. It marked the first time Central Plains lost since a 66-58 defeat to Ellinwood on Feb. 24, 2015.

“The worst thing was just seeing how bad they hurt, a lot of tears in there,” ninth-year coach Pat Stiles said.

Stiles, who has spent more than 30 years in Claflin, stands at 204-5 in nine seasons with the Oiler girls. Stiles has long looked to deflect pressure away from the team and doesn’t discuss the streak.

In the locker room, Stiles reminded the team “how proud he was” to be their coach, and that the current group was “a big part” of the remarkable run. CP recorded the third-longest girls’ high school basketball winning streak in U.S. history.

“It was a disappointing loss, but a lot of pressure lifted off of these kids,” Stiles said. “That was one thing I noticed. They were having a lot of pressure on their shoulders with the streak, and now hopefully they can play more free, and enjoy it more maybe.”

Since the defeat, Stiles and Oeser have heard from multiple people. Oeser, signed to play basketball at Barton County CC, heard from her future roommate - Cunningham point guard Morgan Meyers, one of Kansas’ best players.

“Letting me know that it’s OK,” Oeser said. “Good things have to come to an end, and just that they are proud of us no matter what.”

Sisters Janae and Emily Ryan reached out to Stiles. Emily is the third player in Kansas history to clear 3,000 points and the reigning Kansas Miss Basketball. Ryan’s message: “Tough loss, but now they can make that season their own.” Stiles believed it was good advice.

Less than 24 hours later, Central Plains returned to the court against rebuilding Plainville. The Oilers showed plenty of energy, scored the game’s first 18 points and rolled to a 79-31 victory behind its trademark defense and fast break.

“They were going to come out strong and hot, and there for awhile, there was nothing we could do,” Plainville coach Hannah Friend said. “I mean, they were on fire. Everywhere on the court, it got to the point where I was like, ‘There’s nothing we can really do if they are going to make every single shot they put up.’ And I mean, they are a very well-coached team.”

“Nice just to get back on the winning side of things,” Stiles said.

Miller has rebuilt the Panther program. In ’16-17, Tatum Bartels, who earned all-MIAA honorable mention honors with Fort Hays volleyball, had a chance to become the school’s first 1,000-career point scorer. She played in just a few contests and missed the rest of the year. Phillipsburg won just one game.

The following winter, the Panthers captured five victories. Miller put “a little more emphasis” on the youth program and players bought in. Plus, Phillipsburg was quite aware of Sides’ talent in the younger ranks. Two seasons ago, Phillipsburg, even with the two CP losses, bumped to 12-10.

“It’s nice to see everything kind of come full circle,” Miller said. “We had back-to-back years where we just didn’t have a lot of upper class numbers.”

As a freshman, Sides averaged 19 points, six rebounds, 4.5 steals and 2.8 assists per game. Jacobs and Ava Schemper were important contributors in ’19-20.

Ava missed the beginning of basketball because she contracted COVID-19 in the two-week period between fall and winter sports. Jacobs was in quarantine the first nine practices because of coronavirus contact tracing.

Miller has seen sizable defensive improvements. In this year’s 4-0 start, Phillipsburg has permitted 30.5 points per game. Last season, the Panthers allowed 44.3 points after four contests. Phillipsburg has stressed deflections, contesting every shot and not fouling – all keys in the Central Plains win.

“They are really having an attitude on the defensive end of the floor, and we are wanting to use our length,” Miller said.

Before the season, Central Plains’ biggest tests for the streak were considered the likely matchup with Phillipsburg, and especially the scheduled regular season game at Sterling, ranked No. 1 in 2A, on Jan. 12.

“Before the game actually, we talked about how important it was to come out and do our best this game, and we knew it was going to be very tough,” Oeser said.

Phillipsburg limited Central Plains to 42 percent shooting and kept the Oilers to 10 of 13 from the foul line. The Panthers were plus-2 on the glass. Oeser picked up her fourth foul with 6:16 left in the third quarter and eventually fouled out with 1:38 remaining in the third.

“Phillipsburg does have a big inside game,” Friend said. “I mean, they have some big posts in there, and Central Plains likes to shoot it a lot on the wing, and I was like, ‘If they are not going to get their shots in, it’s going to be hard for them to come out and beat them.’”

Sides delivered a huge performance with 15 points, four assists, three steals and two rebounds. She took a charge, had a block and caused a deflection that led to a turnover. Central Plains committed 21 turnovers.

“That’s the best defensive team we have faced for awhile, and very solid,” Stiles said. “They’ve got good size, and then they have got a great guard that can control the tempo. They are going to be a tough out come postseason, that’s for sure.”

In the season’s first two games, Oakley and Ulysses both ran zone, and Miller was displeased with Phillipsburg’s turnovers. Miller believed the Panthers had to fix the issue for CP. Phillipsburg committed just 13 turnovers, an almost unheard of number versus the Oiler defense. It marked the Panthers’ fewest of the winter. Miller labeled the ball security a “big surprise.”

“Really tells you how focused they were in what their job was,” Miller said.

With 9.4 seconds left in the third quarter, CP inbounded the ball on its sideline. Cheney, in her first year on varsity, deflected the pass. Heather Schemper collected the steal and found Sides for a transition 3 at the buzzer and a 42-33 advantage.

No fans were in attendance because of COVID-19 protocol. Immediately afterward, the Panthers rushed over to the school’s broadcast area, went on camera and said a few congratulatory words to people back home. One Panther mentioned ending the streak. A few former players quickly texted Miller congratulations.

“I was quick to say that was redemption for the year you got to face them twice,” Miller said.

“Personally, I feel so honored to be a Central Plains Oiler,” Oeser said. “Pat Stiles has had a big impact.”

In the spring of ’19, CP held a celebration. All but one player returned. Stiles and a guest speaker spoke, and the Oilers had a meal together. They took a picture with the players and trophies.

“That was a pretty special time,” he said.

Last winter, Central Plains was heavily favored to win the 1A crown when the season was halted entering the final four because of coronavirus. Nixon was the first player off the bench as a freshman and the lone non-senior starter as a sophomore.

“Personally, I have always loved sports,” Nixon said. “Sports has been my biggest thing. Middle school, I was never a big basketball person, but after my freshman year, I have grown to love it, because of my teammates and my coaches.

“They have helped me get better, and they have taught me so much about the game that I actually never even knew, and just getting to be an Oiler is just unbelievable,” she added. “Everyone’s work ethic in our school is just amazing, and you have teammates who push you to be your best, and your coaches.”

After the loss, Central Plains was sad in the locker room. The teams had a players-only meeting once Stiles and longtime assistant Jim Ryan exited. Oeser, Nixon and Jeffrey, the three veterans, spoke.

“It was hard on us of course,” Oeser said. “But just as leaders we have to keep our team encouraged and do what we can to pump them up, and know that’s going to be OK, and we’ve just got to learn from it. That’s just what we’ve got to do.”

On the bus ride home Friday, Central Plains discussed parallels with volleyball and basketball. In ’19 and ’20, Central Plains captured volleyball state titles with coach Lisa Crites. They lost 11 times in both years before playoff perfection.

This fall, Nixon was 1A Volleyball Player of the Year, and Oeser was second team all-state. Senior Ryenne Cunningham, a new basketball starter, was also first team all-state. Just like in volleyball, Central Plains remains the favorite in Class 1A, Division II basketball. Hanover, Cunningham, Golden Plains and Beloit-St. John’s/Tipton are also contenders. BSJT lost 56-24 to Phillipsburg on Saturday in the Russell final.

“It doesn’t matter how many wins and losses you have, it all comes down to the end of the season to how badly you want it,” Nixon said. “So we have pretty big shoes to fill …. and we really want it, so we are just going to step up and keep working our butts off in practices and every game to get there.”