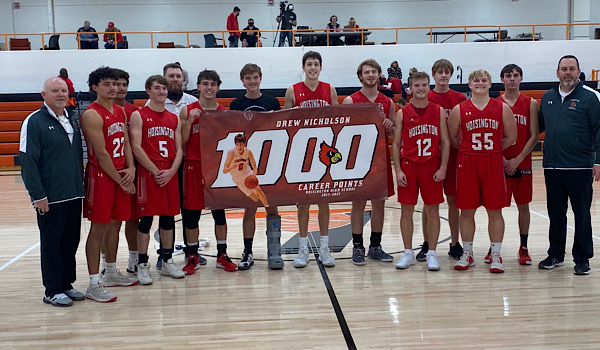 Week 2 of basketball brought a bevy of early season tournaments, the annual AVCTL/City League matchups, and a variety of standout performances. Phillipsburg girls ended Central Plains’ state record 138-game winning streak Friday, the third-longest winning streak nationally ever in girls’ basketball. Phillipsburg marked one of the multiple Mid-Continent League squads that have enjoyed early season success. Check out more on Phillipsburg/Central Plains in a SIK feature early this week. We start, though, with Hoisington – which might be the Class 3A boys’ favorite.

Hoisington is ranked No. 7 in Class 3A, though it might be the 3A early season favorite behind its bevy of talent, including seniors Drew Nicholson and Mason Haxton. The 6-foot-7 Nicholson cleared 1,000 career points this past week.

Nicholson, Haxton, senior Chase Robinson, Ryan Woydziak, Holt Hanzlick, junior Bralen Thompson and sophomore Leyton Haxton are among key players. Hoisington faces Hays High, 3-0 and ranked in Class 5A, in a premier home matchup this Tuesday. Hays High is ranked seventh in 5A. This is the first time Hoisington and Hays High have played in at least 12 years.

After four games, Nicholson has averaged 17.5 points, eight rebounds, 3.8 assists and 2.8 steals per game. Mason Haxton has delivered 10.5 points, six assists and five rebounds a contest. Hanzlick is at 8.8 points and four assists a game. The top-six scorers are all seniors. Also impressively, the Cardinals have a 90/48 assist to turnover ratio. Last year, the Cardinals were at 349/280.

Class 3A: No. 1 Cheney girls win the Girls’ Cardinal Classic

The Cheney tournament had games at Cheney and Wellington, and then finished at Cheney. On Tuesday, Cheney beat Wellington, 58-43, in a matchup of ranked teams. Cheney is No. 1 in 3A, and Wellington is ninth in 4A. Wellington debuted its new basketball floor. Two-time SIK 3A Player of the Year Kylee Scheer finished with 30 points. She was team’s player of the game. Korri Lies delivered 12 for the Cardinals.

On Thursday, Brooklyn Wewe earned team player of the game honors in an 83-35 win versus El Dorado. Scheer tallied 25, and Wewe delivered 19 points with 9 of 12 shooting. Junior Brynn McCormick, a first-year transfer from Scott City, was also 6 of 9 shooting for 15 points.

Spearville extended its winning streak to 28 games and captured the Larned Gene Keady Classic for the third straight year. Spearville, ranked No. 2 in Class 2A, led by 22 after three quarters and held on to beat Hoisington, 53-50, in the final.  The Lancers are 4-0 after 24 straight wins last winter.

Spearville senior Alissa Heskamp tallied 38 points in the semifinal and set the tournament scoring mark. Heskamp scored 24 in the final, though fouled out. Heskamp tallied 86 points in the three games, which broke the previous mark of 79 from Haviland’s Audra Binford in 2004. Binford went on to play at Fort Hays.

Sophomore Taegan Pedigo and senior Addie Nau combined for 20 points for Spearville. Pedigo started last season as a freshman. She had a knee injury and missed the early part of the winter, though has returned.

Class 2A: No. 1 Sterling girls win at Kingman

Sterling captured the Kingman tournament championship. Overall, the Black Bears have a 54-48 win versus Hillsboro, then defeated Valley Center, 54-24, and bested Sunrise Christian Academy, 56-45. In Saturday’s final, Sterling beat Haven, 58-48. Both teams were 3-0 entering the contest. Hillsboro is ranked No. 9 in 2A. On Thursday, Sterling faces Trinity Academy, which is ranked No. 10 in 3A and features Austin Broadie, a Washburn commit.

On the boys’ side, Kingman’s Nolan Freund, Wichita Sunrise’s Marcelino Edwards, Sterling’s Tyus Wilson and Zach Surface, Valley Center’s Gabe Phillips and Eli Issacs, and Haven’s Darby Roper and Zane Jacques were named all-tournament team. Roper was also named as SIK 2A Defensive Player of the Year for Haven football this weekend. Haven is No. 8 in 3A. Reese and Darby are siblings.

Dodge City, ranked No. 8 in Class 6A, is off to a strong start and won the Goodland Topside Tipoff tournament. In the finals, Dodge City defeated Goodland, 58-37. DC broadcaster Sean Boston noted it marked the first time Dodge City won a tournament since the ’07-08 season. Kisa Unruh tied the school record at 848 points with former 3-point shooter Brenna Briggs. She had 12 points, and Camree Johnson tallied 20. Goodland sophomore Talexa Weeter scored 24 points on 7 of 14 shooting. Dodge City finished 17-5 last winter. Check out more on Dodge City later this week on Sports in Kansas.

In the tournament, Johnson finished with 54 points and 22 of 30 shooting in the three contests. Unruh recorded 44 points, 12 assists and 11 rebounds. Overall, Dodge City averaged 66 points per game, shot 53 percent from the field and 38 percent from 3-point range.

Unruh and Johnson won the 3-point contest. Unruh, Johnson and Lauren Gleason were on the six-player all tournament team. Dodge City also earned a tournament win versus Nickerson, ranked third in 4A girls.

Lakin boys collected the Goodland Topside Tipoff, along with the free throw team champions. The Broncs are known for their pressing style with coach Nate Schmitt. Lakin beat Norton, 71-50, in the final. Hunter Davis pace the Broncs with 22 points, and Servando Gonzalez tallied 15.

At the Purple and Gold on Saturday, WaKeeney girls defeated Hoxie, 53-31, and won its home tournament for a third straight season. The Golden Eagles are 27-1 since the start of last winter and have won 12 in a row. WaKeeney had a very sharp effort and committed a remarkably low just four turnovers before it pulled junior point Madison Walt late with the game decided.

WaKeeney again should be a high 2A contender after back-to-back final four showings. Shubert has averaged a double-double with 21.3 points and 10.3 rebounds a game, while Walt delivered 10 assists in the last two contests. Junior Caroline Brungardt is expected to return soon from a knee injury. Both WaKeeney girls and Hoxie boys are 4-0.

On the boys’ side, Hoxie held off WaKeeney, 61-50, and captured the Purple and Gold after a long run playing in the Quinter tournament. Hoxie is ranked No. 1 in Class 2A. While 6-foot-11 senior Harlan Obioha earns plenty of attention, the Indians are highly talented and experienced with coach Jake Moss.

Hoxie received 15 points and 11 rebounds from Obioha and had its second comeback in the second half this season. Gavin Tremblay tallied 14 points, Caden White 13. Ashton Dowell scored nine, including a buzzer-beater at the end of the third quarter. Trego coach Sean Dreiling made another step in his program’s development with qualifying for the finals this weekend. The Golden Eagles had solid tournament play from senior Kobi Shubert and juniors Charlie Russell and Cole Feldt.

Golden Plains, which had not lost a regular season game in the ’18-19 or ’19-20 seasons, won its fifth straight Sagebrush Shootout tournament championship with a 41-20 victory versus Leoti-Wichita County. Golden Plains is fifth in Class 1A, Division II.

On Saturday, Ellinwood rolled over Fairfield, 66-34, to win the Fairfield tournament. Standout sophomore Britton Dutton tallied 38 points with 16 of 24 shooting. Dutton enjoyed an exceptional freshman year with 17.9 points and 4.8 rebounds. This year, the Eagles are 4-0 behind 25.8 points, 6.3 rebounds, 4.3 assists and 3.3 steals from Dutton. Ellinwood is ranked No. 9 in 2A boys.

Class 5A: Kierscht off to remarkable shooting start for Salina Central girls

Salina Central junior Aubrie Kierscht, possibly the state’s best shooter, tied her career high with 32 points. She finished 12 of 14 from the field, including 6 of 6 from 3-point range. Kierscht has committed to Navy. SC is ranked fifth in 5A. The Mustangs are 3-0 and has averaged 61 points per game. Salina Central has beaten Campus (64-21), Goddard Eisenhower (52-42) and Salina South (67-39).

Kierscht has delivered 24.7 points and 3.3 rebounds a game. All of SC’s points come from non-seniors. Sophomore Mykayla Cunningham has delivered 14.3 points and seven rebounds. Junior Landry Stewart is at 5.3 points, 6.7 rebounds.

Andover ran its winning streak to 26 games with its third straight quality victory. The Trojans (3-0) opened with a 73-44 win versus McPherson, currently ranked fifth in Class 4A. Then, Andover beat Campus, 85-66, last Tuesday. Campus entered with a 24-game winning streak and is currently fourth in 6A.

On Saturday, the Trojans held off traditional power Wichita Heights, 54-52, in the AVCTL/GWAL challenge. Jack Johnson missed the game with an ankle injury, reported Chuck Chaney of the Butler County Times Gazette. Johnson has committed to Dallas Baptist.

Kaleb Gaddis delivered a team-high 13 points. Heights led by eight in the third quarter. Isaiah Maikori sunk a pair of free throws with 15.2 seconds remaining to seal the win.

Class 2A: West Elk girls off to perfect start

Topeka High is ranked No. 1 in Class 6A, and Liberal is unranked in 5A. Both teams were 23-0 last season and finished as Class 6A Final Four teams. Topeka High won its first contest of the year on Friday with an 81-31 victory versus Topeka West.

On Thursday, Liberal won 66-56 at Wichita Trinity. Overall, Liberal has won 59 straight regular season contests. Trinity is ranked No. 10 in Class 3A.

Clay Center’s Clara Edwards went over 1,000 career points. CC, led by her father Jeff Edwards, was a 4A Final Four team last winter and a top-5 4A squad this winter. Edwards has signed to play Division I softball at South Dakota. Clay Center is ranked fifth in 4A.

Hutchinson Trinity’s Lucas Hammeke cleared 1,000 career points. Hammeke has been a key multi-year player for the Celtics. He started as a sophomore when the Celtics were 2A state runner-up. Hutch Trinity is eighth in 2A.

Last Tuesday, Halstead girls defeated Eureka, 53-29, in a matchup of ranked teams. Halstead, also a 3A Final Four squad last winter, then defeated Wichita Independent, 52-38, on Friday. Halstead has won each game by at least 14 points and allowed just 28 points a contest this winter. Halstead has won 13 straight.

The Dragons, which went to the state tournament for the first time last winter, finished 21-3 and allowed just 28 points a game. Halstead has Kareena Gerber, a Pittsburg State commit, among a strong veteran roster that sophomore Kaleigh O’Brien and senior Madi McClain. Halstead is second in Class 3A, and Eureka eighth in 3A.

Derby girls cruised over Bishop Carroll, 61-44, in the AVCTL/GWAL challenge. Derby is ranked fifth in 6A, and Bishop Carroll eighth in 5A. Derby improved to 3-0. Sophomore standouts Maryn Archer and Addy Brown each tallied 16 points, according to the Derby Informer. Tatum Boettjer added 12, and Jaidyn Schomp finished with 10.

Ellsworth boys captured the Russell tournament with a 53-48 win versus Ulysses in the championship game Saturday.

Valley Heights’ Emma Toerber signed to University of Mary for volleyball, a Division II school located in North Dakota. VH is fifth in 2A. Toerber was a four-year starter in volleyball. The 5-foot-10 senior has helped Valley Heights to wins against Riley County (48-40), Marysville (49-40) and Republic County (51-26). Riley County is ranked ninth in 3A girls.