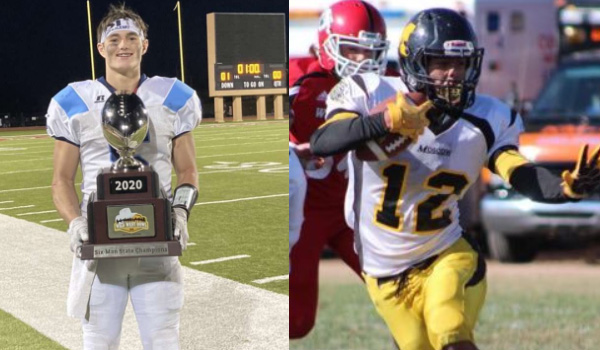 Bird City-Cheylin senior Colton McCarty won SIK six-man offensive player of the year for the second straight season. McCarty led the Cougars to a 9-0 record and six-man state championship, the first athletic title in school annals. McCarty completed 23 of 45 passes for 638 yards with 17 scores against two interceptions. He rushed 121 times for 1,833 yards and 34 rushing scores. The 6-foot, 180-pound McCarty has multiple offers at the NAIA/junior college level and is widely regarded as among Kansas’ best players for all classes.

In his remarkable career, McCarty completed 226 of 416 passes for 3,464 yards with 71 scores against nine interceptions. He rushed 527 times for 6,386 yards and 111 scores. This season, Cheylin ran more I formation with McCarty as the running back and he averaged 15.1 yards per carry, easily the best of his four years.

In his career, McCarty accounted for 308 yards of total offense per game. SIK has researched records in several states that have six-man football, especially Texas. By all accounts, McCarty is the all-time national leader in six-man total offensive yards per contest. McCarty earned Six-Man Offensive MVP from the classification coaches for the second straight season.

Congrats to Cheylin HS senior Colton McCarty on back-to-back POY honors from Sports in Kansas. We are proud of you! - From Coach Walden and the Cheylin HS Cougars!

Warning: include(../includes/module_comments.php): failed to open stream: No such file or directory in /home/kansass/public_html/ks/news/index.php on line 115