Blanka and Zarybnicky lead the way for 8M-II POY honors at SIK. 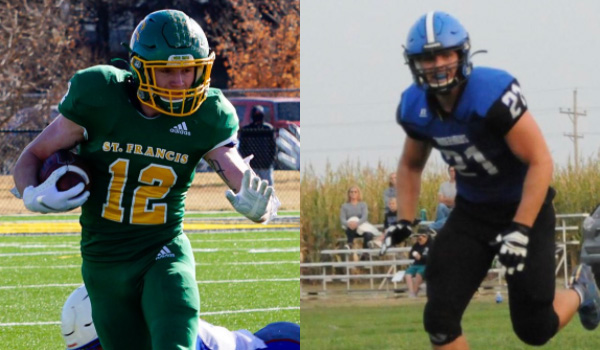 St. Francis senior running back Shadyron Blanka enjoyed a huge season with 237 carries for 2,280 yards. Arguably eight-man’s top two-way player, Blanka also finished with 89 tackles, 13 for loss. He helped SF to a second straight state runner-up finish. Blanka, who has several NAIA and junior college offers, rushed for 4,276 yards in the last three seasons. In the state final, Blanka rushed 32 times for 230 yards and two TDs. He helped SF to a 34-3 mark in the last three years in the run-heavy single wing offense. St. Francis finished 11-1, including a forfeit victory, this fall.

Congratulations on a fantastic season, we are super proud of you and your accomplishments! Papa Tom and Grandma Donna

Congratulations Shadryon Blanka of SFCHS on being selected... We have enjoyed watching you play this yer and we are proud of you! Dustin and Sharissa Andrist and Family, Andrist Ag & Auto

We are so proud of you, that you have stayed true to yourself and accomplished so much in your high school career and being named Sports in Kansas 8 Man II Player of the Year! We love watching you play! Love Mom, Dad and Shakotah

Wheatland-Grinnell senior linebacker Trevor Zarybnicky helped the Thunderhawks to 8-2 and 8-3 marks the last two seasons, the best years in school history. The 6-foot-3, 235-pound Zarybnicky has received offers from KCAC Ottawa and Bethel.

Zarybnicky led W-G with 161 tackles, the most in Kansas. He had the third-highest tackle total for any eight-man player in the last four seasons. Zarybnicky recorded 12.5 tackles for loss, six sacks, seven forced fumbles and three blocked kicks. He has a 3.6 GPA, ran 4.75 seconds in the 40-yard dash, and posted a 335-pound bench. He is likely one of the most under-the-radar football recruits in Kansas with his size, strength and physicality .

In his career, Zarybnicky delivered 403 tackles, 30 for loss and 13.5 sacks. He forced a remarkable 16 fumbles – the most by any player in at least the five years, according to SIK research. Zarybnicky is an outstanding fullback/blocker and averaged 12 points a game his junior season in basketball. Zarybnicky won a tight race that also saw Jesse Baxter of St. Francis get numerous POY votes. Two outstanding players in 8M-II of the many this season.

Congratulations to Trevor Zarybnicky of Wheatland-Grinnell High School for being selected as the 8M-II Kansas Defensive Player of the Year from Sports in Kansas - What an incredible accomplishment for a very deserving young man! - Thunderhawk Booster Club - proud to support W-G!