Abell, Brown and Skalsky headline 1A POY honors from SIK. 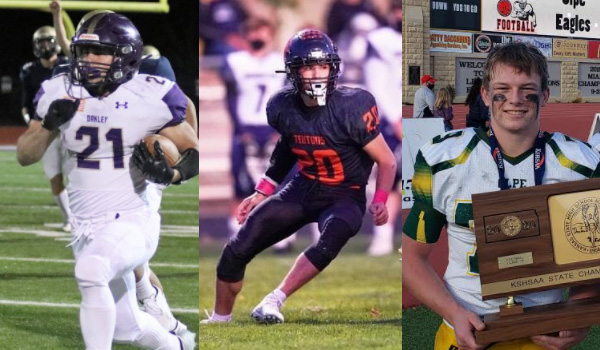 Oakley won just eight games in the last four years, including 3-6 last fall. This season, the Plainsmen delivered a surprising 10-3 season and Class 1A state runner-up finish to Olpe. Oakley, under fourth-year coach Jeff Hennick, reached the first state championship game in school history. The Plainsmen lost to Smith Center and Inman in districts, and then defeated both teams in the playoffs.

Senior 5-foot-9, 175-pound running back Ethan Abell was the unanimous 1A Offensive Player of the Year. He delivered 275 carries for 2,050 yards with 26 touchdowns, along with five catches for 104 yards. Hennick confirmed to SIK on Thursday that Abell set the school single season rushing record. Aaron Racette, a 2008 Shrine Bowler, had the previous record with 1,800 rushing yards.

In the playoffs, Abell delivered 37 carries for 179 yards in a 27-24 road win versus Sedgwick. In the quarterfinals, Abell collected 37 rushes for 249 yards and three TDs at Smith Center. It marked the first ever Oakley win versus the Redmen. Oakley was 0-13 versus Smith Center since ’03, according to Kansas Football History.

Abell carried the ball on all but seven offensive plays versus Smith Center as Oakley continually drained the clock. In the semifinals, Abell finished 27 carries for 111 yards versus Inman. Oakley had a veteran offensive line paced by Jenson Schoenfeld. Abell and Schoenfeld were each first team all-state 1A Seniors by the Kansas coaches.

Congrats to Ethan on POY and the Plainsmen team/coaches. Proud to be a supporter of the Oakley Plainsmen. Logan County Implement is a proud support of Oakley Athletics.

Kenny's Auto Repair would like to congratulate the 1A State Runner-Up Oakley Plainsmen. Congrats on all your success this season and congrats to Ethan on SIK 1A OPOY. We are proud of you!

Class 1A, District 3 had Oakley (10-3), Smith Center (9-2) and Inman (9-3) – the best district in the classification. Inman senior linebacker Carter Brown was the unanimous defensive MVP from the district coaches. Brown helped Inman allow just 9.7 points per game. Inman went 0-9 when the current seniors were freshmen.

Since then, the Teutons, with coach Lance Sawyer, went 6-4, 6-5 and 9-3. Two years ago marked Inman’s best finish in 25 years. This season yielded the top showing in Inman’s 11-man history. Brown helped Inman allow just two passing TDs and only 157 total yards per contest. Inman permitted 2.8 yards per carry, forced 20 turnovers and finished plus-8 in turnover margin. Brown had 126 tackles, 81 solo and nine TFLs, all numbers that ranked second for the Teutons. He paced Inman with two forced fumbles. Inman finished with the second-fewest points allowed per game in 1A, trailing only Olpe (35 points permitted).

Olpe 195-pound junior linebacker Ted Skalsky led 11-man’s No. 1 scoring defense. He helped the Eagles win the 1A state title and served as the Eagles’ top defensive player. Skalsky led Olpe with 112 tackles, 43 solo. No other Eagle had more than 19 solo tackles. Skalsky finished with 15 tackles for loss, third-most for the Eagles. He deflected two passes. Olpe scored seven defensive touchdowns, four interceptions and three via fumble recovery. Skalsky started as a sophomore and was tops among Olpe’s 2020 returner with 95 stops.

Congrats Ted on being named Sports in Kansas 1A Defensive Player of Year!  We are proud of the effort you have put in to become the player you are.  Above all we love the energy and heart you have brought to the game. Keep working to make your dreams come true.  We love you!  Mom, Dad, Blake, Lilly & Alisa

Congrats to Carter Brown on 1A Defensive Player of the Year from the Inman High School Football Team. We are proud of you. Congrats to all of our athletes this fall on an awesome football season. From Inman Football & Inman HS

Congratulations to Inman HS senior Carter Brown for being named Sports in Kansas 1A Player of the Year! We are so proud of you and your teams accomplishments! Continue to be a great leader! - Love, Mom and Dad

Sports in Kansas 1A Offensive Player of the Year Finalists

Sports in Kansas 1A Defensive Player of the Year Finalists