v Sports in Kansas: Round of 16 Darkhorses - Sports in Kansas 
Warning: include(../includes/bodytag.php): failed to open stream: No such file or directory in /home/kansass/public_html/ks/news/index.php on line 36

Sports in Kansas: Round of 16 Darkhorses

Darkhorse teams are headlined by Beloit. 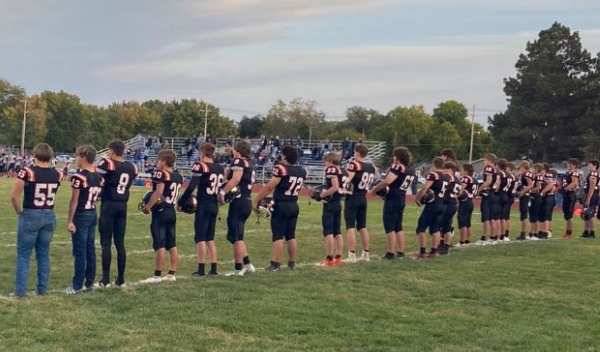 The 2019 Beloit football team delivered a 7-4 record and Class 3A quarterfinals showing, its best finish in six years. The Trojans had 12 seniors. Beloit graduated all of its passing yards, along with more than 80 percent of receptions. Only 19 rushing yards came from non-seniors.

Defensively, the top-three tacklers and six of the top-eight were seniors. Quarterback Hudson Gray, running back Carson Cox, lineman Creighton Johnson and wide receiver Vincent Palen were among nine first team all-league picks at a position. Johnson, Cox and Palen achieved first team both ways. All the first teamers graduated.

Beloit had delivered a winning record every year from ’05-19 and dropped to Class 2A this fall.

“The culture of our program has not wavered,” coach Brad Gober said. “Our kids have believed since Day 1 that we are a good football team.”

However, Beloit opened with a pair of road losses: 30-14 to Republic County and 18-0 versus Southeast of Saline. RC defeated the Trojans for the first time since ’99. SES, currently No. 4 in 3A, is easily the classification’s best scoring defense.

After Week 2, Beloit delivered major offensive changes. Gober labeled the ’19 offense “a lot of inside zone.” At first, Beloit wanted to stay with that in ’20 for continuity. Gober thought the look was OK, but not fitting this year’s personnel. Beloit decided to put in a power game and double tight end with sophomore running back Benson Berndt.

Beloit went 2-6 in the regular season, though showed signs of improvement. The Trojans lost, 49-28, to Phillipsburg in Week 5 and committed six turnovers. The following week, COVID-19 cancelled the district game versus Norton. In a contest scheduled late in the week, Beloit lost, 36-6, at Centralia.

“We have just lost some games that young teams lose,” Gober said.

The following week, the Trojans lost, 26-20, at undefeated Hoisington. SES, Hoisington and Centralia are a combined 24-1. The players stayed bought in and never wavered.

“We have played good football at times, just not putting it all together has been our issue,” he said.

Last Friday, Beloit broke through – and delivered one of Kansas’ top Week 9 upsets. Beloit, the No. 4 and last seed from District 8, beat Thomas More Prep-Marian, 55-14, on the road at Lewis Field Stadium at Fort Hays State University. TMP, enjoying its best season in 18 years, had won District 7. The Monarchs had allowed 12.1 points per game.

Afterward, Gober gathered his team in the end zone. He listed several strengths for the Trojans: physicality, good quickness and playing extremely hard.

“We are not a normal now 3-6 football team,” Gober told his squad.

Beloit has achieved rare history as a No. 4 seed winning in Week 9 and has emerged as one of Kansas’ top darkhorses entering Round of 16 action this weekend.

“Can play with a lot of teams on the west side,” Gober said.

That further crystallized Thursday. Beloit was expected to travel to Phillipsburg for a rematch against the Panthers and standout senior dual threat quarterback Ty Sides. He passed for 847 yards and rushed for 1,104 yards with 24 offensive scores accounted for.

However, Phillipsburg announced Thursday it could not play Friday’s game because of a COVID-19 outbreak. Beloit receives the forfeit victory and moves into the 2A quarterfinals to face the winner of Haven/Hutchinson Trinity.

As well, 6A Dodge City, 2A Cimarron and 2A Fredonia have also cancelled because of COVID-19. Eight-Man, Division II’s Central Plains is in modified quarantine, though is expected to play Friday at Caldwell. Cimarron was scheduled to face No. 2 Hoisington, considered the 2A West favorite.

Beloit has already tied for the furthest playoff advancement by a No. 4 seed.

Overall, No. 4 seeds finished 2-37 in Week 9 contests in ’18, according to SIK research and official KSHSAA brackets. In 2A, Garden Plain beat Douglass, and Argonia-Attica defeated Sedan. A-A advanced to the quarterfinals.

In ’19, No. 4 seeds finished 3-36. Wichita Collegiate and Concordia both won in 3A, and Caldwell in Eight-Man, Division I. Caldwell advanced to the quarterfinals.

This season, No. 4 seeds were 2-30 last week. In addition to Beloit, Girard upset previously undefeated Columbus in 3A East. Girard (4-5) won 29-18 after a 26-7 loss to Columbus in Week 3. Beloit joins a rare collection of sub-.500 squads to reach the quarterfinals.

Since the offensive switch after Week 2, Beloit has averaged 41 carries and 247 rushing yards a game.

“We have gotten better every single week,” Gober said.  “And our kids are growing up, and we are a much different football team than we were at the beginning of the year, and I am just so proud of our guys.”

All of the offensive line starters are non-seniors. Junior Cameron Konkel (5-foot-7, 220) handles the majority of the pulls on power right. Junior Gage Robinson (6-0, 245) has taken over at center and is a first-year starter.

“Our offensive line has just gotten so much better, every single week,” Gober said.

Junior Owen Eilert was 0 of 6 in high school before this season. He has also improved with 41 of 85 passing for 689 yards with nine scores against five interceptions. That included five touchdowns combined the last two weeks.

“Experience is so much with regards to success,” Gober said.

Berndt, who called this season “awesome,” after his return, has led with 196 carries for 1,173 yards and nine scores. Anthony Henke, one of two seniors who start, has 111 carries for 645 yards. Berndt broke his collarbone in Week 2 practice last season and missed the whole year.

The 5-foot-9, 170-pounder rushed for 173 yards in the season opener and 148 versus Phillipsburg. Earlier in the year, Berndt delivered 15-yard runs.  However, the coaching staff believed Berndt could break longer runs through better reading. They walked through certain plays with him to improve decision making. Two weeks ago, Gober started to see a difference. Berndt delivered 30 carries for 260 yards versus Minneapolis, including carries of 50 and 69 yards.

Last week, he had two more long runs versus TMP and collected 30 carries for 273 yards and three scores.

“He’s just getting so much better,” Gober said. “He’s a really talented kid.”

Round of 16 darkhorse(s) in every class

Kapaun Mt. Carmel – The Crusaders face Goddard this week in a highly intriguing contest. KMC has enjoyed one of the state’s biggest turnarounds with new coach Weston Schartz. He has coached in the City League for several decades. KMC was 2-7 last year and 7-1 this season. The Crusaders have much more improved offensive line and a balanced effort.

Rose Hill – In a fairly wide-open 4A West, Rose Hill has won six in a row after an 0-3 start that yielded multiple close losses. RH is home against Buhler this week. The winner will likely face McPherson, the West’s No. 1 seed. McPherson has lost in the last three state semifinals and has never made a championship game. Also in 4A West, El Dorado won the first playoff game in school history and faces Wamego. The Red Raiders are a win away from tying for the second-best showing in school annals. RH has 33.3 points per game after it tallied 20.3 points a game last season.

Girard earned its upset against Columbus, though Frontenac (5-4) is the darkhorse of 3A. The Raiders entered the season No. 6 in 3A but have battled COVID-19 issues all throughout the season. Frontenac has its excellent defensive line led by junior Landon Dean, who holds multiple Division I offers. All-State lineman Cruz Blair, linebacker Jusice Compton and defensive back Ty Gates have also been huge for the Raiders this season as well as breakout sophomore speedster Mario Menghini. Junior Quarterback Collin McCartney, who was known for his play at defensive end last season, is one of the top players in 3A this season.  Frontenac will also avoid Hayden/Perry-Lecompton until a possible semifinal matchup. Frontenac won, 28-12, at Burlington in Week 5 in district play, though Burlington won the district. Frontenac has generally posted strong defenses with coach Mark Smith and has 19 points allowed a contest. The game versus Burlington will be an absolute dogfight as the score was a bit decieving in the first matchup in which Frontenac won and jumped out to an early lead. Expect a solid defensive battle this week.

Centralia, Olpe, Smith Center and Conway Springs (in some order) have separated themselves from the 1A pack. However, No. 5 Inman, which has enjoyed its most victories since the early ‘90s, is the darkhorse. The Teutons have Whitewater-Remington this week and played competitively against Smith Center in district play. A win likely sets up a contest versus Conway Springs. Inman beat Whitewater-Remington, 54-13, in the regular season. Sedgwick is still a question mark team and could very well be a darkhorse with their offensive firepower. Sedgwick has never made it past the round of eight although has dominated in regular season in recent memory.

Hoxie (7-1) – The Indians, which have a huge home matchup against South Gray this week, has quietly wanted another chance against No. 2-ranked Leoti-Wichita County. Hoxie lost to WC, 54-20, in Week 1. That marks Leoti’s only game within 45 points. Hoxie, a 4-5 team last year, could make a big jump into at least the state semifinals – especially if it wins Friday. Hoxie has a balanced offense with 156 passing and 175 rushing yards a game.

Beloit St. John’s-Tipton – Division II has had the same top teams pretty much all season with St. Francis, Hanover, Victoria, Lebo, Frankfort, and Colony-Crest as the top-6, and Axtell, Wheatland-Grinnell, Central Plains and Sylvan-Lucas as the next list. However, BSJT (7-2) quietly won District 4 and has shown a dynamic offense. The Blujays gets No. 5 Frankfort at home this week. Frankfort has played just once since Week 5. BSJT has won seven in a row and has averaged 44.8 points a game this season. Frankfort is at 50.3. BSJT has 95 passing and 245 rushing yards a contest. Senior Brayden Perez has delivered another big season with 141 carries and 1,145 yards with 23 scores. He also leads 124 tackles, one ahead of Blake Perez. BSJT has been over .500 every year from ’12-20.