v Sports in Kansas: State Volleyball Preview - Sports in Kansas 
Warning: include(../includes/bodytag.php): failed to open stream: No such file or directory in /home/kansass/public_html/ks/news/index.php on line 36

Smith Center is one of the four teams in the 2A state tournament. 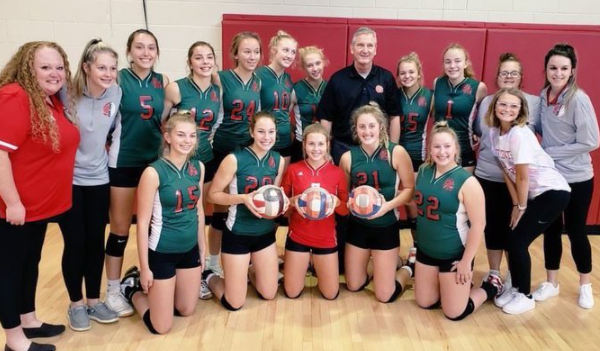 Goodland’s Angie Brumbaugh, like many volleyball coaches, simply wanted to have a season this year after significant uncertainty from the COVID-19 pandemic.

“We were just hoping that we would get to have some matches,” Brumbaugh said. “So we are just thankful that the state’s just working to try to allow kids an opportunity to compete and do things that they love to do, which makes them successful in the classroom and outside of sports as well.”

This year, KSHSAA elected to limit large crowds and have the state quarterfinal matches Tuesday at host sites in a best of five match. Quarterfinals matchups were based on the two closest geographic sub-states. Then, state is a one-day event with the teams playing five matches – a round robin, semifinals and finals.

Generally, teams play very few best-of-five matches in the regular season, normally just on occasion in the large metro areas. Additionally, this year teams were advised to not play in tournaments with five matches in one day – though they would do so at state.

Some corners, specifically well-known St. James Academy coach Nancy Dorsey, expressed great displeasure in the setup. Multiple No. 1-ranked squads, including Andale and Sabetha, had to go on the road for a quarterfinal match Tuesday.

“It came to my attention this year that KSHSAA, our state association made some changes to the post-season under the guise of “covid” and I have some serious concerns,” Dorsey wrote in a long post on her blog. “First, and most importantly, these changes were made to the sports that girls play, not the ones the boys play.”

However, Brumbaugh didn’t mind the set up – and neither did TMP coach Natausha Dreher or sophomore Talexa Weeter, the Cowgirls’ leading hitter. Goodland beat TMP in five sets, including 16-14 in the fifth, in a great match in front of a raucous crowd at Al Billinger Fieldhouse in Hays. Brumbaugh labeled the environment “fun.”

“We knew early that that’s what the option would be,” Brumbaugh said. “It just kind of spreads it out a little bit, and this whole year, I mean back in August, I was just hoping we’d get to play.”

By and large, the different format did not yield a significant home field advantage. Ranked teams went 10-3 against unranked teams.

Overall, the home teams combined for a 14-14 record. Eight of the matches went five sets.

“It’s really not a lot different, because if you think about some of nights when we have tris and quads, I mean, you might play back to back, two or three matches in a row,” Brumbaugh said of five sets. “So we really don’t prepare a lot different for that.”

However, all four of the 4A favorites were on the road, including top-three teams Andale, McPherson and Bishop Miege.

Seven unranked (non-top-10) squads reached the final four, all in 3A down. Class 6A Garden City delivered a big comeback at Derby to win in five sets.

In 3A, Goodland won the five-set match at unranked TMP. In 2A, defending champion Wabaunsee is unranked. Heritage Christian, unranked, delivered arguably the biggest upset with a win versus Pittsburg St. Mary’s Colgan, the No. 1 squad in 2A.

In 1A, Division I, Central Prairie League rivals St. John and Central Plains are unranked. Wheatland-Grinnell is unranked in Division II.

Garden City, Heritage Christian, Central Plains and Wheatland-Grinnell were the only unranked teams to beat a ranked squad Tuesday.

Junior Abby Rose, a Division I recruit, led with 14 kills and led down the stretch. Smoky Valley finished the fourth set on a 15-6 run, including six straight points to finish.

Cheney took its last lead at 18-17 before Rose delivered back-to-back blocks and a kill. She had another kill to break a 19-19 tie. She served out the final run, including an ace on the final point. Overall, Rose led with 14 kills, and Bri Franklin, a Kansas Wesleyan signing, delivered 10 kills. SV coach Sharlene Ramsey said the Vikings “put together such a complete game.” Six hitters had more than five kills apiece.

“That makes it difficult for an opponent to try and defend that!,” coach Sharlene Ramsey said. “Our girls played so well together and really played for one another. They have a special bond, and it’s what kept them united tonight. Cheney is a great team, and they have had a great season!”

Garden City (20-13) – Garden City beat Derby and advanced to the final four for the first time since 1997, according to GC historian Brett Marshall. Look for Garden City featured as Sports in Kansas' American Implement team of the week.

Washburn Rural (32-4) – Rural rolled over Wichita Northwest, 25-13, 25-15, 25-15. Rural is ranked fourth. The Junior Blues are the defending 6A runner-up for coach Kevin Bordewick, who exceeded 900 career victories this fall. Rural last won state in ’12 and has seven overall titles. Rural is loaded, including with sophomore Brooklyn DeLeye, a first team all-state pick as a freshman and a top national recruit.

Class 4A – Tournament is Friday at Hutchinson Sports Arena

Andale (34-2) – No. 1 Andale beat Clearwater, 25-18, 25-18, 25-18. Andale has never won a state title but finished as the runner-up to Topeka Hayden last season. Coach Kaylie Bergkamp has led an Indian group that features Katelyn Fairchild, a Texas A&M track signee. Andale is ranked first in 4A, and Clearwater tenth.

Bishop Miege (17-11) – Miege beat Wamego, 25-20, 25-16, 25-18. Miege is ranked third, Wamego ninth. Miege is the all-time winningest program with 25 state titles, the last coming in ’18. The Stags bounced back after a rare missed state appearance last fall. Senior Payton Verhulst, a Louisville basketball commit, returned to volleyball after she took last season off. She is Miege’s top hitter and was a first team all-state volleyball pick as a sophomore.

Ottawa (23-13) – Ottawa has enjoyed a rare Final Four berth and enjoyed a big turnaround with a 25-5, 25-10, 25-19 win versus Labette County. Ottawa is ranked eighth in 4A. Ottawa has never won a state volleyball crown. The Cyclones have their first state berth since ’11 and when they finished third. Ottawa was 15-21 in ’19. Senior Darby Wiedl has been in the top-5 in Kansas for kills at 476.

Class 3A – Tournament is Saturday at Hutchinson Sports Arena

Goodland (34-5) – Goodland won an epic match at TMP, 25-23, 17-25, 25-20, 15-25, 16-14. Neither Goodland or TMP was ranked entering state, though TMP had been ranked earlier this year. The Cowgirls have won 29 consecutive matches. Goodland has won four titles, the last one coming in ’03. That marks Goodland’s last final four appearance before this year. Goodland is very deep and has enjoyed a big turnaround after 34 combined wins the last four years. Sophomore Talexa Weeter has led the team in kills the last two years, and the Lehmans, sophomore Olivia and junior Emma, are key hitters. Senior setter Mikayla Biermann, and senior libero Anna Gutierrez are key specialists.

Smoky Valley (31-2) – The Vikings won at home against Cheney in a high-profile match, 25-17, 25-18, 24-26, 25-19. Cheney is ranked second, Smoky Valley third. SV has enjoyed the best season in school history. The Vikings reached the final four for the first time in school annals. SV reached state and won a league title for the first time since the mid-80s. Smoky Valley has its highly experienced group led by Rose, Franklin, junior Madi Tolle, Aubrey Boldra, and seniors Addie Heitschmidt, Belle Peters, Elyse Ramsey, McKinley Johnson and Kerington Haxton. Rose has 246 kills and hits .388, and Franklin is at 185 kills with a .389 average.

Sabetha (36-1) – The Bluejays beat Perry-Lecompton, 25-16, 25-17, 25-13. Sabetha is at state for the first time since 1999. Sabetha is ranked first in 3A. Sabetha has enjoyed the best season in school annals back-to-back years. The top-three hitters are all seniors: Melinna Schumann, Leah Renyer, and Carmyn Wessel. Schumann (344 kills) is a four-year starter and the team’s best passer. Renyer has 337 kills. Sophomore Mary Lukert also won a regional cross country title and has played in all 82 sets.

Smith Center (33-6) – In a high-profile match, Smith Center beat Spearville, 27-25, 25-2, 25-22. Coach Nick Linn won his 900th career match earlier this fall. Linn has multiple final four volleyball appearances but has a chance for his first volleyball state finale with SC. He has won a girls’ basketball state title with the Lady Red. Smith Center has no seniors on varsity, the first time Linn has had that occur. Smith Center was ranked sixth, Spearville fifth. Junior 6-foot middle hitter/blocker Tallon Rentschler is among the Lady Red’s all-time best hitters.

Class 1A, Division I – Tournament is Saturday at Dodge City’s United Wireless Arena

Central Plains/Wilson (28-11) – In a matchup of Central Prairie League rivals, CP beat the Knights, 25-23, 25-17, 23-25, 25-10, at home. Central Plains is the defending 1A state champions and will be the favorite at state. Central Plains, which opened the season No. 1 in Division II, bumped up when the new classifications came out in midseason. CP was not ranked, and Victoria was ranked sixth. Central Plains, always with its challenging schedule under coach Lisa Crites, was seeded seventh last fall and won the title. Central Plains has multiple strong players, including junior Kassidy Nixon, a returning first team all-state player.

Class 1A, Division II – Tournament will be Saturday at White Auditorium

Hanover (29-6) – The Wildcats beat Linn, 20-25, 25-20, 25-13, 25-19, in a matchup of Twin Valley League rivals. Hanover, with its bevy of underclassmen, is ranked second in 1A, Division II. The Wildcats’ lone volleyball championship came in ’79. Hanover has just two seniors on the roster; neither one has a kill. Sophomore Ceegan Atkins has 278 kills, junior Madison Bruna has delivered 178 and junior Allison Jueneman with 166.