v Sports in Kansas: Statewide Volleyball Notes - 10/23/20 - Sports in Kansas 
Warning: include(../includes/bodytag.php): failed to open stream: No such file or directory in /home/kansass/public_html/ks/news/index.php on line 36

Cheney is a team to watch for this season. 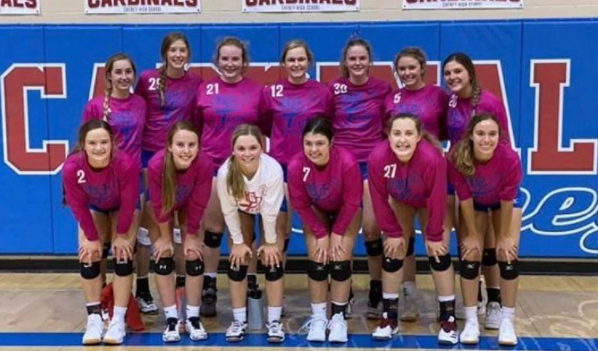 Sub-State Preview: Sedgwick looks to break through with state appearance

Head coach Karen Stucky, in her 18th season at Sedgwick, and assistant coach Sarah Sampson highly stressed depth in the summer. The Cardinals wanted to have at least two deep at every position in case players had to miss time because of coronavirus exposure.

“We were prepared no matter what situation we faced this year,” Stucky said.

Sedgwick opened 4-0, including a pair of victories versus Sterling. After a loss to Garden Plain, the Cardinals reeled off 10 consecutive wins with two victories against Inman. The Cardinals were virtually unaffected by COVID until the double matches versus Heart of America foe Hutchinson Trinity on Oct. 6, the season’s final home date. If Sedgwick won both matches, the Cardinals would capture their fourth straight league title. The seniors earned conference crowns in seventh and eighth grade.

The girls knew a male student had tested positive and talked about it in the locker room before the 5 p.m. match against Trinity Catholic. Sedgwick beat the Celtics, 25-9, 25-9.

“They were saying how some of them sat close to him,” Stucky said. “And so while they were talking, my mind was really thinking, ‘What If?’ and that ‘what if’ happened.”

“We didn’t want to keep that on the down low,” Stucky said. “We wanted to be honest and put it right out there. It was sad for her. It was her last home match. That was the match that meant we were league champions four times in a row. I mean, it was pretty devastating. But it was good to see us rally, and we battled, and we ended up winning. That was kind of a crazy night.”

On Oct. 13, the Cardinals completed the regular season with a win versus Centre-Lost Springs and a loss versus Sterling. Sedgwick missed three players, two seniors and a junior. The Cardinals finished 30-5 and are the No. 2 seed in the Inman sub-state that occurs Saturday.

“We battled and we tried our best to treat it like a challenge instead of a woe is me kind of thing,” Stucky said. “And now we are all back, and we are just playing with a new appreciation and a new gratefulness knowing that it could be taken away very quickly.”

Stucky is 471-204 with the Cardinals, including 38-2 last fall. However, Sedgwick has made one all-time state appearance, in ’05, according to KSHSAA archives. Sedgwick is part of a group of teams that have enjoyed a strong 2020 and look to break a long state drought, including Goodland, Lakin, St. Francis, Herington and Great Bend. Additionally, 6A Olathe Northwest is unbeaten, and 3A features some remarkably challenging sub-states.

The Class 2A sub-state at Hill City is expected to miss Ellinwood and WaKeeney-Trego, two of the top-three teams, because of COVID-19. The sub-state was originally supposed to be in Trego.

The Cardinals lost to powerhouse Garden Plain each of the past two years in sub-state. This season, GP is ranked fourth in 2A, Sedgwick eighth.

“They have been a monkey on our back, so I think we go into every sub-state knowing that anybody can beat us and that we can beat anybody,” Stucky said. “But I tell you, Garden Plain, in my mind is always one of the top-two teams in the state of Kansas. They are so well-coached, and they have great athletes, and it just hasn’t been our time yet.”

“I will be honest, when we got the sub-state assignments, it was just a little bit of a relief for our girls to know that that wasn’t the challenge that was going to be lingering in their minds,” Stucky said. “But the thing about our sub-state is it’s basically a league tournament. And we have already played all of our league schools at least twice, and so now we have to go do it again, and that makes our sub-state almost another kind of mental challenge. But we are certainly ready for it.”

Sedgwick returned a bevy of experience, especially with juniors and seniors. This summer, the seniors picked players up for weights, took them home, went out to eat, hung out, and communicated via SnapChat to build strong chemistry. Stucky labeled the team “a great unified group.”

“When we’ve got young players that are up and down, they provide the consistency to our program, and it’s been easy to get our young girls comfortable, because they have been allowed to make mistakes because of the consistency of the seniors,” Stucky said. “Off the court, it was pretty apparent early on this summer that the seniors understood that they were going to have to rely on young players.”

Senior Taylinn Lacey, a first team all-league outside hitter in ’19, leads with 250 kills and a 2.03 serve-receive rating. She has 247 digs. Matson missed three matches because of quarantine and has paced with 612 assists, among Kansas’ highest totals.

“Kami and Madi, they are just joys,” Stucky said. “Very light-hearted. Very light spirited, and they bring a lot of fun to the team, where Taylinn might be a little bit more serious, Kami and Madi are much more light-hearted, so they keep things easy, and every team needs that.”

Junior middle blocker Alexa Scarlett, a three-sport athlete known for her athleticism in multiple sports and high kill efficiency in volleyball, has 145 kills and 44 blocks. For the first time, Scarlett has played nearly all rotations, including passing and defense.

“A fabulous, dynamic athlete,” Stucky said. “She just seems to turn every ball into gold.”

Stucky, the libero, leads in aces (69) and digs (284), and is second in serve-receive at 1.93. Sampson is second in kills (149) and aces (49). Lacey and Stucky are the top passers. Sophomores Liana McGonigle and Addie Fitch are part of the rotation.

“The ability of the seniors to kind of envelope everybody and be good leaders, that’s been fabulous,” coach Stucky said. “And again just handling the stress of not knowing when and if people are going to be available to play.”

Herington looks to break through with experienced group

Herington hosts a Class 2A sub-state and leads Kansas by a substantial margin in hitting percentage. The sub-state is very deep. Herington is the No. 1 seed at 29-2, while Valley Heights is seeded second at 29-5.

Washington County has made a nice turnaround and is the fourth seed at 17-7. Wabaunsee is fifth at 23-10. Valley Heights was ranked first in 2A in the preseason, and Wabaunsee has taken second and first at state the last two seasons.

Herington’s lone state appearance in the last 20 years came in 2002.

This year, Herington won the Wheat State League tournament on Oct. 17. Libero Madi Becker suffered a pinkie finger injury on Oct. 13. Herington had to rearrange its lineup and put two freshmen in the lineup who had very limited varsity time. One of the two seniors, Hannah Pohlman, moved to libero. Herington has two seniors and seven juniors who have seen substantial time.

Carrie Roe and left-hander Halle Rutschman are the outside hitters and have great years. Herington has had sub-state runner-up showings in recent seasons. Coach Lisa Beye has led the squad.

Roe is one of the state’s best hitters with 363 kills and a .476 average. Herington has errors on just eight percent of swings, a miniscule rate. Roe notably has just 37 errors on 685 swings. Rutschman is hitting .316 with 201 kills.

Since ’02, Great Bend volleyball qualified in ’07 and ’13. Coach Shelly Duvall enjoyed a nice turnaround last season. GB is the No. 1 seed in its sub-state at 18-10 and gets rival Hays High (13-22) in the first round. Salina Central and Salina South are both under .500 in the other first round matchup. GB has dealt with COVID-19 concerns throughout the season.

Great Bend is known for defense with seniors Sydney Unruh, Rachel Panzer, and Lexi Deines. Unruh has 457 digs, Panzer has 252 and Deines with 237.

Olathe Northwest and Garden City bring streaks into 6A

Garden City (17-13) is the No. 2 seed in the Dodge City sub-state. Hutchinson (19-13) is the top seed. GC has won 10 straight Western Athletic Conference championships.

In the Olathe East sub-state, Olathe Northwest is 24-0 in a sub-state where the other three teams that have a combined 19 wins. Northwest has a bevy of talented freshmen. Northwest is ranked first in 6A.

Coach Barry Lenth has built Northwest into a national program, though Northwest took a rare down year to 14-21 last fall. This season, the Ravens’ top-four hitters are all freshmen.

The 3A Burlington sub-state features top-seeded West Franklin (28-3). Eureka (22-4) is the second seed. West Franklin is seeded eighth in 3A. In the last 25 years, West Franklin’s lone state appearance came in 2007.

3A sub-state at St. Marys loaded

Rock Creek has made one state tournament since ’99, a second-place finish in ’08. Smoky Valley last reached state in ’86.

The Cheney sub-state has No. 1 Cheney (25-3) and second-seeded Trinity Academy (22-6). Cheney has its experienced senior group led by Kylie Scheer and libero Lexi Cline, while Trinity has Austin Broadie, a Washburn commit. Cheney is ranked second, and Trinity Academy fourth.

Meade/Fowler and Spearville posed for 2A rematch

In the 2A Syracuse sub-state, Meade is 30-2, and Spearville stands at 28-2. The teams split two meetings. Spearville stands fifth, and Meade is unranked. Spearville is the defending 2A runner-up to Wabaunsee. Spearville has senor Alissa Heskamp, a returning first team all-state libero. Meade junior Kylin Rudzik, known for kills with both left and right hands, has 203 kills.