v Sports in Kansas: Statewide Volleyball Notes - 10/14/20 - Sports in Kansas 
Warning: include(../includes/bodytag.php): failed to open stream: No such file or directory in /home/kansass/public_html/ks/news/index.php on line 36 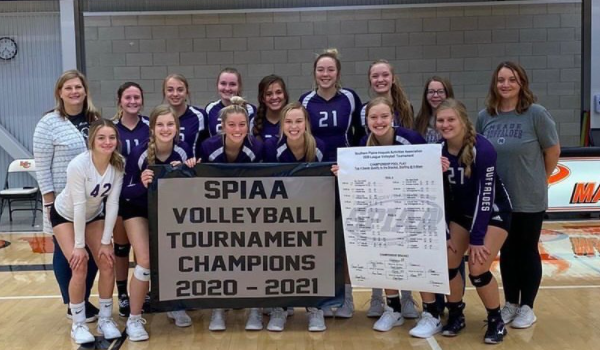 All rankings as of Oct. 7 by the Kansas Volleyball Association

Meade coach Leann Krier led nearby Fowler for four years and is currently in her fourth fall with the Buffaloes. Krier helped Meade to 33 wins in ’17 and 34 the following season, the most victories in school history since at least 1972. Meade reached the state tournament both falls, which marks the lone back-to-back trips since ’98-99, according to KSHSAA.

At Fowler, Krier enjoyed success with a fourth-place state showing in Class 1A, Division II in ’14, a 20-13 mark in ’15 and another state appearance the next year.

This year, Meade is co-oping with Fowler, located 11 miles apart on US-54. It bumped the Buffaloes from 1A to 2A. The squad has opened 26-2 with excellent team chemistry. Meade returned 76 percent of its kills, 77 percent of blocks, and 71 percent of assists.

“I am lucky, that’s really all it boils down to, is I am lucky,” she said.

“That’s part of the reason that we have had some success,” Krier said. “Is because I have good athletes. Nine times out of 10, an athlete is going to be beat somebody – they are just going to out-athlete the other team, I guess.”

Meade has a highly experienced team with seniors Trinity Woods and Lauren Christiansen at middle hitter, respectively. Christiansen has started since her sophomore season.

“From Day 1, she was doing things that are uncommon for a freshman to be able to do,” Krier said. “And not only was she swinging well on the front row, but she is a solid little back row player, too.”

Unruh has started at setter since the end of her freshman year and was second team all-league last season. Shelby was first team all-league. Shelby, Woods, Rudzik, Miller and Friesen all started in ’19.

Fowler, a 1A school, reached out to Meade because they weren’t going to be able to field a team. The Goldbugs have two girls, both JV players.

“Build bridges and be good neighbors,” Krier said. “That’s just kind of the mentality of our district here is we will do what we can to help.”

Sometimes in the past, Krier had worked through challenging situations with her squads that has led to team meetings to address positivity. This fall, though, the Buffs have displayed a close bond.

“One of my favorite things about this team is, it sounds a little bit cliché, but they truly do love each other well,” Krier said. “Like, a lot of times with girls, you will be fighting drama or hurt feelings or whatever, and maybe I don’t know see everything – I am sure they don’t tell me everything – but if you watch them on the court, they are smiling, they are having fun.”

Meade switched conferences from the Hi-Plains League to the Southern Plains Iroquois. Last Saturday, the Buffaloes, unranked in 2A, captured the league tournament championship at Kiowa County.

Krier said Meade talks “a lot” about expectations and “how we treat people.” Krier has had certain daily themes, such as being resilient or loving each other, but credited the players for doing “it on their own, for the most part.”

In the finals, Meade beat Spearville, 25-21, 25-17, which entered the tournament undefeated and ranked fifth in 2A. The Buffs had lost to Spearville, 25-18, 25-20, on Sept. 29 at Coldwater. Meade and Spearville are the top-two seeds in the Syracuse sub-state. Krier expects the pair will match up again.

“And part of it comes with winning, I mean no doubt, but they truly are relaxed,” Krier said. “They love each other. I mean, they are just good teammates to each other, and so it’s made my job as far as managing personalities and those types of things, it’s made it really easy.”

In the first Spearville matchup, Tawney Krominga and Cameron Offerle combined for 20 kills. Krominga and Offerle are opposite of each other, so one of them is always in the front row. Meade heavily focused on the duo and limited them to a combined eight kills.

Additionally, Krier does not regularly call serves; a significant number of coaches call every serve for their teams. In the first set, Meade did not serve to Spearville’s first team all-state libero Alissa Heskamp until the 25th point of the first half.

“I really do trust them to make those decisions,” Krier said.

Offensively, Rudzik finished with 11 kills, while Lauren and Shelby, both sisters, each tallied 10. Meade hit .342 and had committed errors on 12.7 percent of swings. Rudzik leads with 179 kills, 60 more than any teammate. In the Spearville match and throughout the last two years, Rudzik, a natural right-hander, has delivered kills with her left and right arms, an extreme rarity. She carries a .302 average. Rudzik hit .147 in ’19.

“They are keying off her right hand when they are trying to block her, and then she’s tall, and she has a good vertical, so she gets over the top of them anyway,” Krier said.

Last year, she went up with her left every once in awhile. Rudzik is stronger with her right arm and has posted plenty of kills with both arms. She improved on her mechanics from last year and gained confidence.

“If she gets somebody up in her face or if she is a little late getting to the set, or something like that, she will just plop it right there,” Krier said.

Last year, Meade finished 24-16, though dealt with injuries. Senior Corbyn Carr, a three-year starter in the middle and Hi-Plains League MVP, didn’t play the full season. The Buffs hit .156 with 10.1 kills per set and averaged kills on 32.8 percent of swings. This year, Meade carries a .207 average with 11.1 kills per set and kills on 37.6 percent of swings. Krier said more experience has helped the offense.

“We still make more unforced errors than I would like, but this group is so aggressive, and that’s part of the reason that they are great is because they are not scared,” Krier said.

“They are both phenomenal girls,” Krier said. “Kind, responsible, great, great girls, but they are pretty different personality-wise. Shelby has a little more of an edge to her.”

Miller, known for her back row anticipation, paces with 176 digs. Friesen, the team leader in aces last fall, has a Buff-best 53 aces, which is tied for No. 12 in Kansas, according to MaxPreps.

Smoky Valley captured the Central Kansas League championship on Tuesday at Hesston. SV went 9-0 in the CKL. The Vikings trailed Hesston by nine points in the first set at 25-14 and came back to win. Addie Heitschmidt served the final 11 points of the first set. Bri Franklin, who has committed to Kansas Wesleyan volleyball, had a dominant performance at the net in both matches. Smoky Valley defeated Pratt, 25-10, 25-16 and Hesston, 26-24, 25-17.

Belle Peters, a state champion pole vaulter and the fifth-best vaulter in state history, is also a key volleyball player. The senior committed in the last week to Pittsburg State track and field.

This Saturday, SV goes to Abilene for matches against state ranked teams Rossville and Buhler. Franklin and junior Abby Rose, a Division I recruit, are and among the state leaders in hitting percentage at .410 and .389. The duo and Heitschmidt all have at least 117 kills this season.

Lansing continues to cruise and defeated Shawnee Heights on Tuesday to win the UKC title. First-year coach Lindsay Zych, a former Lion assistant, has paced the Lions to a 20-0 start. Junior Olivia Mae Van der Werff paces with 214 kills. Junior libero Kamryn Farris and junior setter Caitlyn Bishop are among the state’s best at their positions. Lansing is third in 5A.

Overall, Morrow leads with 208 kills, and Jones has 196. Morrow hit .257, and Jones carries a .305 average. Sophomore Avery Lowe delivered a .344 average. Maize South has had an error on 12.8 percent of swings. Junior Callie Palecki leads with 49 aces. Jones has 418 assists, and Boulanger has emerged with 210 assists. The 6-foot-1 Jones has delivered 1,692 career assists.

In Valley Heights’ latest statistical release, senior Emma Toerber has 239 kills and carries a .230 average. Junior Maddy Vermetten stands with 125 kills and a .236 average. Junior Emma Yungeberg has delivered 125 kills with a .203 hitting percentage. Yungeberg has 44 blocks. Valley Heights has been balanced defensively with five players between 103 and 147 digs. Vermetten has 147 digs.

Claflin-Central Plains’ Lexi Oeser, a key member of the Oilers’ 1A volleyball championship last fall, picked up her first offer, from Barton County Community College. Last season, CP’s Addison Crites was 1A Player of the Year and is now at Barton. Oeser, also a strong basketball player, has helped CP open 17-7 in the latest statistical release. She, junior Kassidy Nixon, and Ryenne Cunningham have been the top Oiler hitters. Central Plains was ranked third in Class 1A, Division II.

Frontenac lost to Olathe Heritage Christian Academy in four sets on Oct. 8, and then defeated Baxter Springs and Girard in three-set victories on Monday and Tuesday, respectively. The Raiders had won 23 straight before the Heritage Christian loss. Frontenac is 25-4 and will play Topeka Hayden and Bishop Miege on Thursday, and rival Colgan on Saturday. Hayden is the reigning 4A state champion and Miege is one of the state’s all-time best programs. Colgan is ranked first in 2A. Junior Heather Arnett continues to lead Frontenac in a variety of statistics, including kills (226), digs (212) and serve-receives (287). Senior Gracen Hipfl is seventh in Kansas in assists at 564.

Lebo went undefeated to win the Scott City tournament over the weekend. Lakin Lady Bronc volleyball went 4-0 on Tuesday against SW Heights and Sublette as the senior girls have racked up multiple HPL and HPL tournament championships over the years. Sabetha won back-to-back league championships and have 27-1 record this season in the Big 7 conference in 3A. West Franklin won back to back regular season championships in their league with a 25-2 record. Wamego went undefeated over the weekend to capture the Council Grove Tournament. Clay Center Volleyball went undefeated in their home "pink out" quad supporting breast cancer on Saturday. Paola went 4-1 on Saturday at the Atchison Tournament to capture the tourney title.

Impressive Records - Records According to KSHSAA Standings (if not correct, your schedule on KSHSAA needs to be updated)