v Improved offenses and states top scoring offenses - Sports in Kansas 
Warning: include(../includes/bodytag.php): failed to open stream: No such file or directory in /home/kansass/public_html/ks/news/index.php on line 36 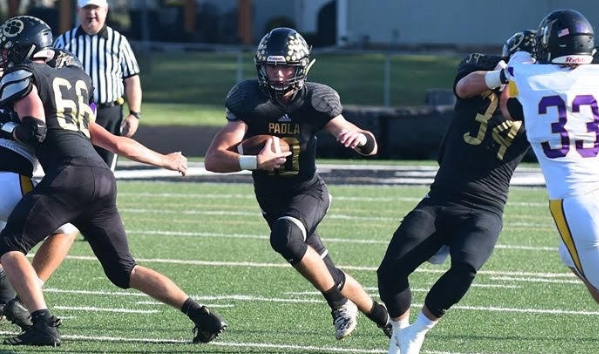 Senior-laden Colony-Crest completes behind-the-back pass; one of several offenses with big improvement over 2019

In 2018, Colony-Crest finished 0-9, the program’s first winless season in 30 years. Coach Nick McAnulty and assistant Zach Mason, both Uniontown graduates, took over the Lancer program. McAnulty had coached at various levels in Iola and Baldwin. He learned the single wing from former Iola and Baldwin coach Doug Kerr.

McAnulty has been most pleased with the “buy-in” of the players. Crest propelled to a 6-4 mark last fall, the highest win total in seven years.

“Just made a transition a fun one,” McAnulty said.

This fall, the Lancers have opened 4-0 in Eight-Man, Division II, District 1. Crest leads the classification with 240 points and is one of five 4-0 teams remaining in the class.

Crest is one of multiple surprise teams that leads a classification in scoring offense (total points) through the first month. Last year, the Lancers tallied 276 points.

Many games, notably at the 5A/6A level, have been cancelled, which has yielded some surprises atop team leaderboards. Several teams, including 6A Wichita East, 5A Topeka Seaman and 2A Osage City, have nearly or already eclipsed last year’s offensive totals, according to MaxPreps and Prep Power Index archives.

Additionally, In Week 4, Crest beat St. Paul, 58-8, and the single wing yielded one of more improbable plays of 2020. Crest had lost three straight to SP. This week, the Lancers are at Waverly (2-2, 1-0) in a contest that will likely decide District 1.

On a two-point conversion, senior Stratton McGhee threw a backwards pass to senior Kobey Miller. The play has been viewed more than 17,000 times on Twitter.

Crest had two backs. The ball is snapped to senior quarterback Jacquez Coleman. He handed off to McGhee, who with his back to the end zone, threw the ball over his head. Miller, the only receiver, comes from the right side and cuts into the middle for the catch.

Crest noticed that when it lines up in the formation, opponents expect a buck play straight up the middle with sophomore Holden Barker. On the prior two-point conversion, Crest ran the buck lateral where Barker handed it to McGhee and McGhee pitched to Coleman for a score.

This time, McGhee took the handoff, which allowed time for Miller and senior Tyson Hermreck to meet in the middle. McAnulty told McGhee to make sure the throw was “deep enough” in the end zone.

“This was just another variation of it,” McAnulty said. “Just kind of the old school single wing stuff, and we just kind of implemented it. … Not a lot of people run that kind of stuff.

“So we worked on it,” he added. “We had it in the playbook since last year, and then Stratton has just kind of been bugging me saying, ‘We need to run it, we need to run it.’ And so last Friday came, and we thought, ‘Let’s just go ahead and run it.’ And he was hesitant at the moment, but then it looked great.”

McAnulty described his offense as a “little bit” of old school single wing, and “kind of almost” a spread single wing.

Kerr, currently in his second season as a volunteer assistant coach at Ottawa University, has coached for more than 20 seasons. He has served as a head coach at two stops in Florida before Kansas.

Four of Kerr’s former players went on to the NFL. A ’92 Derby graduate, Kerr has used a variety of single wing styles, including spin, spread, pistol and motion series. While multiple single wing offenses heavily rely on the run and three backs in the backfield, Crest has a variety of looks.

“The biggest thing is, if we motion somebody, that we have a whole bunch of different offensive options that we are going to run off of it,” McAnulty said. “So teams can’t just say, ‘Oh, this guy is motioning across, that means it’s jet sweep.’ It’s like we try and keep things, ‘Well, it could be jet, it could be iso, it could be a pass.’ Just kind of keeping the defense on their toes, not knowing where the ball is going.’”

In ’19, Crest had just two seniors, including leading rusher Zack Beckmon. The Lancers rushed for 239 yards and passed for 69 a game. Coleman, also the signal caller as a sophomore, served as the primary quarterback with 44 of 90 passing for 393 yards with a 3/3 TD/INT ratio. He also had a team-best 101 carries for 627 yards and eight scores. Tyson Hermreck finished with 18 catches for 290 yards and a TD.

This season, Crest has eight seniors. This summer, McAnulty noticed the ability and was excited for the season. McAnulty talked with Coleman and said, “Things are looking pretty good.” Coleman replied, “It kind of feels like we never stopped.”

“Things have just kind of been going smooth from the first day that we stepped on the field,” McAnulty said.

Normally six to seven seniors are on the field at the same time. McAnulty is pleased with communication and chemistry.

“It’s been amazing,” McAnulty said. “Because a lot of those guys had to take a late leadership role last year, just because we only had a couple seniors. So it’s just kind of transitioned over.”

This year, Coleman is much more efficient with 16 of 24 passing for 156 yards with a 4/1 TD/INT ratio. He also has 27 carries for 375 yards and seven scores. Coleman heavily worked out during quarantine and put has put on 20 pounds of muscle.

“He’s a very good leader,” McAnulty said. “And nobody is going to outwork him.”

Barker has delivered 24 carries for 363 yards and eight TDs. Hermreck, with strong weight room attendance, athleticism and jumping ability, is at 10 catches for 104 yards for three TDs. His dad, Travis, is the longtime basketball coach, along with principal and AD duties. Hermreck was one of the top non-seniors in southeast Kansas basketball last winter.

“One of his biggest strengths is his intelligence and communication,” McAnulty said. “He will come to the sideline and tell me, ‘OK, coach, this guy is playing me this way.’”

Defensively, Crest has multiple looks, including blitz, zone and man.

“Try and get guys flying to the football,” McAnulty said.

Last year, albeit against a more difficult schedule, the Lancers opened 1-3. Then, Crest captured five straight wins and has won nine regular season/Week 9 games in a row.

Last year, Crest won games 26-2 and 20-0, rare low-scoring victories. It marked the fewest points in a win since a 14-6 victory in Week 2 of ’13 versus Marmaton Valley. In ’19, Crest’s seven of its top-eight tacklers were non-seniors, paced by 82 from McGhee and 79 by Caleb Nolan.

This fall, three of the four opponents have had its lowest output with Crest. This year, Barker has paced with 37, and McGhee has delivered 24. Senior defensive lineman Andrew McAdam has played well with 12 stops (10 solo) and two sacks.

McAnulty is an ’05 Uniontown graduate, Mason ’08. McAnulty played some rugby at Emporia State and stresses the rugby-style tackling that was introduced a few years ago. The style requires wrapping up the opposing player with the head out.

“Seeing how much it helped reduce concussions,” he said. “…Kind of wrapping low and tackling and rolling or driving our feet.”

Crest heavily focuses on going through motions with tackling bags. The Lancers will work often with tackling bags, including in full pads with open field and pursuit tackling Wednesday. McAnulty said Crest “struggled with it at times” last year, but this season the work is “really showing.”

A look at the top scoring offense (most points) for each of the other seven KSHSAA classes:

Unranked Wichita East and No. 1-Lawrence are the top-two offenses with 172 and 151 points a game. East has rolled through the City League and has not permitted a point. Last year, East tallied 205 total points in nine games. East has its stable of impressive playmakers, including wide receiver Daylan Jones (multiple Division I offers), A.J. King (Wichita Southeast transfer) and freshman quarterback Daeonte Mitchell.

No. 1 Andale is first at 226 points, and No. 2 Perry-Lecompton stands second at 200. However, unranked Clearwater (4-0) is third with 195 points behind dual threat quarterback Tanner Cash, a school record holder in multiple categories. Clearwater went 7-3 and tallied 261 points last fall.

No. 1 Rossville, with its veteran team that includes quarterback Torrey Horak and wide receiver Bo Reeves, easily leads the class at 223 points. Maur Hill, behind two-way standout Andrew Schwinn, is second at 189 points. MH is ranked fifth this week. Unranked Eureka (4-0) is third at 187, and Osage City is 3-1 with 166 points. Eureka and OC have standout linemen in Braden Rucker and Dane Whalen, respectively.

Osage City has already tallied more points than all of last season’s 5-4 record that had 147 points. OC sophomore quarterback Landon Boss has completed 46 of 75 passes for 623 yards with an 11/3 TD/INT ratio. He has also rushed 44 times for 408 yards and two TDs. The 5-foot-11 Boss started as a freshman with 383 passing yards and a 3/4 TD/INT ratio.

Unranked Sedgwick and No. 1 Olpe are the only 4-0 squads, though Sedgwick does have a win by forfeit. Olpe ranks first with 183 points, while unranked Jefferson County North is second at 178 points. JCN stood No. 13 in 1A last year with 270 points in a 5-4 season.