v Sports in Kansas: Statewide Volleyball Notes - 9/23/20 - Sports in Kansas 
Warning: include(../includes/bodytag.php): failed to open stream: No such file or directory in /home/kansass/public_html/ks/news/index.php on line 36 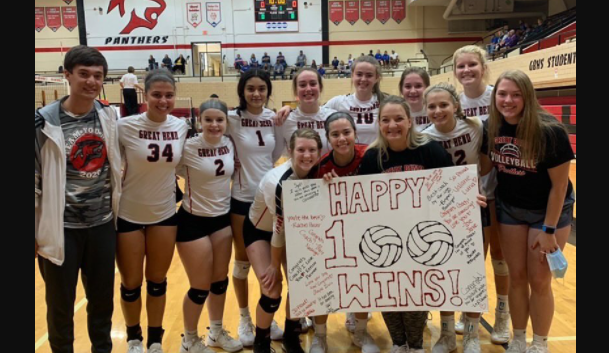 All rankings as of Sept. 17 from the Kansas Volleyball Association. All statistical leaderboards from MaxPreps unless otherwise noted.

Sabetha volleyball establishing culture of volleyball; off to surprising 14-0 start

Sabetha volleyball coach Abby Stueve served three seasons as an assistant coach and is in her fourth fall as head coach. In ’17, the Bluejays won just six matches. Two falls ago, Sabetha hovered around .500.

Sabetha, which has not made state since 1999, vaulted to 33-9, the best record in school history.

“My first couple of years, we didn’t have a whole lot of experience,” Stueve said. “And so what we have now is that culture of volleyball on the team as far as girls spending extra time in the gym, whether it be in the summer with me, whether it be on travel teams – that experience really does show, and it seems to be paying off.”

Sabetha graduated seven players off last year’s squad and returned just two starters: Schumann and junior Emily Krebs, the lone setter in the 5-1 offense. Schumann, a four-year starter, was honorable mention all-state by the Kansas Volleyball Coaches Association in ’19. She has received substantial NAIA interest. Schumann is the team’s best passer and her leadership has infused the girls with confidence.

“Ball sense, true and true ball sense,” Stueve said. “She can read exactly what’s going to happen before anybody else. She can get to the ball anywhere on the court. It’s truly amazing what she brings in that sense, and then her communication about what’s going to happen with that ball. She’s just anticipates like I have never seen before. I think that’s really her gift.”

Sabetha’s new starters have included multiple players who have put in substantial time in the offseason. They mainly play with a club team in Seneca coached by Jessica Koch, the highly successful Baileyville B&B and current Nemaha Central coach. Several play club in Effingham. Koch has won more than 500 career matches.

The new group has yielded a 14-0 start that Stueve labeled “a huge surprise.” The Bluejays are ranked fifth in 3A.

“This is a group of girls that do spend that time outside of season getting experience,” Stueve said. “And so that’s what I kind of contribute a lot of it to. Is it everything? No. That’s a big part of it, in my opinion.”

Sabetha was not ranked in the 3A preseason and opened with Valley Heights, ranked No. 1 in Class 2A, in the Marysville tournament. VH returned 69 percent of its kills. Stueve’s key question was: “Are we going to play how we are supposed to play?”

“We’ve got to compete, and beat the best if we are going to be the best,” Stueve said.

Senior Leah Renyer, who played well as a junior after a Bluejay was injured, stepped up with 13 kills in the victory.

Sophomore Mary Lukert, a versatile right side, stepped into a varsity role with three kills and two blocks.

“On any other team, she would be playing on an outside position,” Stueve said. “She is a heckuva hitter, but right now, she’s kind of filling that role on that right side really, really well for us.”

Sabetha captured the Marysville tournament with a three-set championship win versus Nemaha Central, the Bluejays’ rival and preseason seventh in 3A. Sabetha won 23-25, 25-22, 26-24. Schumann finished with 15 kills, one more than Deters.

On Tuesday, Sabetha was scheduled to have a Nemaha County Rivalry rematch with Nemaha Central, a 6-2 team that had just gotten out of COVID-19 quarantine.

Entering the match, Renyer led the team with 119 kills, eight more than Schumann. Renyer also paced with 18 aces. Deters and Wessel tied with 30 blocks. Schumann and Renyer ranked 1-2 in digs at 163 and 118. Schumann easily paced with 151 serve-receives, by far the most on the team.

“It’s always been a big rival between NC and Sabetha,” Stueve said. “It started even back when they were Nemaha Valley, and so it is always a heightened sense of game, because it is Nemaha Central and Sabetha, because that’s just been the history of the two schools.

“It’s something that as a coach I think I feel like I am always fighting, because I kind of get the mental aspect of it a little bit stronger than the girls do,” she added. “But really trying to fight that idea that you have to be mentally ready for games like that.”

As well, the Bluejays beat Big 7 rival Royal Valley twice, the defending 3A state champion, in a battle of undefeated squads on Sept. 15. RV was ranked No. 1 in 3A.

The teams took roughly a 75-minute break between the matches. Sabetha took a big lead in the conference race.

Sabetha never trailed in the first match. In the first set of the second match, Stueve called a quick timeout after the Bluejays trailed 2-0 in the first set. Sabetha quickly battled back for a 3-3 tie, though trailed 11-8 before another timeout and eventually led by six.

“Just our effort,” Stueve said. “That’s something we talk about first and foremost is having effort on the court. I mean, you just never know unless you try, and that’s kind of been my mantra with them – all-out pursuit.”

Notably, last year, Sabetha lost to RV twice on Aug. 31, on Sept. 17 and Oct. 5. On Oct. 22, Sabetha defeated Royal Valley in two sets, one of just six losses for the Panthers and its standout first team all-state hitter Ivy Fink. Sabetha limited RV to a .158 average in the win.

“Confidence that it can be done, because Royal Valley has always been that elusive team for us,” Stueve said.

Fink collectively hit .372 with kills on 49 percent of swings in the five matches versus the Bluejays in ’19. This summer, Sabetha competed well against Royal Valley.

In the two wins this year, Sabetha collectively held Fink to a negative hitting percentage with 11 total kills against 12 errors. Fink had kills on just 21 percent of swings.

“We know Ivy likes to mix it up, and we really just stressed getting touches – reach and get touches, and that was kind of the big emphasis …,” Stueve said. “Reaching and then being in position. Even if we never touched Ivy, it was all about just being in position, and then it kind of played out that being in position was exactly what we needed to do.”

Smoky Valley, ranked fourth in 3A, continued to enjoy a great season and improved to 15-1 after Tuesday.

Five players had between four and eight kills for Burlingame. Junior Brooke Lewis delivered eight kills and zero errors on 20 attempts. Senior Katie Shaffer and junior Daelyn Winters led with 15 and 13 assists, respectively. Burlingame was 30-0 in sets won, including a pair of 3-0 victories.

Winters also has 23 aces for a team that is serving 90 percent. Senior Jaelynn Brake and sophomore Alexandra Cook are tied with 27 blocks. Masters easily leads with 92 digs. Burlingame was 22-13 last season and returned all but one kill. Last year, the Bearcats committed errors on 15.4 percent of swings. Lewis led with 275 kills, 170 more than any other teammate.

Last year, Smith Center finished 34-7 with seven seniors. Rentschler had 310 kills, second-most on the squad, and Long was fourth with 128 kills.

On Tuesday, Frontenac swept a triangular with wins against Fredonia (25-7, 25-14) and Erie (25-15, 25-15). Frontenac has won nine in a row after an 0-2 start. Junior Heather Arnett paces the Raiders with 80 kills, 27 more than senior Reagan Hipfl. Arnett leads Frontenac with 19 aces. Sophomore Mia Brown is at 78 digs, six ahead of Arnett.

Central Plains, the defending 1A state champion and ranked first in Class 1A, Division II, missed the first two weeks because of COVID-19 quarantine, and won the Russell tournament with wins against Hoisington, Goodland and Russell in pool play, and a 25-17, 25-19 victory versus Norton in the championship match. It marked just Hoisington’s second loss of the year.

The Broncos, ranked in the top-25 nationally earlier this year, split a triangular last Thursday with a 2-0 win versus Blue Valley Southwest and lost in three sets to Bonner Springs in an odd match score.

Junior Alexis Moeschler led with 14 digs, while Cruse had 10.

Cruse was a 2021 Top 150 national player by Prep Volleyball and has committed to Nevada-Las Vegas. Cruse has delivered a huge season with 165 kills, along with a .437 average. Moeschler has 119 digs, 17 ahead of Cruse for the season high. Cruse ranks fifth in kills, one spot ahead of Bluestem’s Torrance Lovesee, a Tennessee El Paso commit.

Spring Hill is fourth in 5A, and Bonner Springs is seventh in 5A.

On Tuesday, Rock Creek gave Wabaunsee, the defending 2A champions and ranked second in 2A, its first losses in a pair of matches. Rock Creek won the first match 25-21, 25-22 and the second 25-22, 13-25, 25-11. Wabaunsee is 13-2. In the two-set match, Rock Creek limited the Chargers to .021 hitting, and junior Lauren Schutter, a returning first team all-state player, had eight kills.

On Tuesday, Riverton had its first loss of the year with a three-set defeat to Girard, 25-19, 19-25, 25-14.  The Rams defeated Columbus in two sets, 25-10, 25-19, after it won the Oswego  tournament over the weekend. Thomasson has 193 kills with a .351 hitting average. Riverton’s three hitters and five of its top-six are freshmen or sophomores. Senior Erin Berry leads with 46 aces, seven more than Thomasson.

The 5-foot-11 Thomasson is also easily the team leader with 35 blocks, while freshman Kayla Greer has delivered 113 digs. Berry and senior setter/right side Lexi Nowlin are the team captain.

Thomasson is the state leader with 193 kills.

St. James starting to cruise with another round of Division I signees

SJA, ranked No. 2 in 5A, lost in two sets to rival St. Thomas Aquinas in the season opener, and then reeled off nine straight victories, including three-set victories versus Blue Valley North and Blue Valley West.

The Jaguars’ only losses have come against Spring Hill in the season opener, and versus St. James in a two-set loss on Sept. 9. Since then, Mill Valley has won five in a row, the last three against Olathe area teams.

That included a quality three-set victory versus Olathe West on Sept. 17. Mill Valley, which switched from the Eastern Kansas League to the Sunflower League this season, is 7-2. MV bumped to No. 10 in 6A in the last poll after not being ranked.

Olathe West is 4-6, though Testrake leads with 52 kills.

Hiawatha won their own tournament this weekend by going 6-0. The Redhawks defeated entralia, Horton, Seabury, Nemaha Central, Riverside and Jeff County North. After dropping four of their first five they've won 11 games in a row.

Marion took first at the Spike Fest Tournament this weekend by going 4-0 in the tournament with wins over Douglass, Eureka, Centre, and Lyons. Marion split with Sedgwick on Tuesday.

Shelly Duvall picked up her 100th career win as the head coach for Great Bend over the weekend for the Panthers.