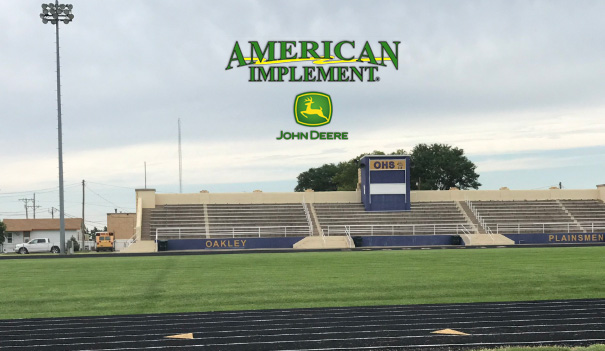 Then, Hennick worked as an assistant for Ayers on the ’13 team that earned state runner-up to Baileyville B&B. Hennick replaced Ayers as head coach from ’14-16 and paced the Wildcats to three consecutive state semifinal showings and a cumulative 30-6 record. Ayers is currently the Little River coach.

“Coach Ayers is a role model – he’s still a role model to me today,” Hennick said. “I still talk to him at least once or twice a week, and he had built that program that we had started.”

Hennick, known for his perpetual enthusiasm and energy, talked to his wife, Amberly.

The Hennicks moved 53 miles on US-40 East, and Jeff became the head football coach at Oakley. The Plainsmen, long recognized for its defense and running game mainly under former coach Randall Rath, fell to 1-8 in ’16.

Hennick took over the following year, and the Plainsmen were 1-8, 3-6 and 3-6 the last three falls. Hennick noticed the growth, including weight room numbers and on-field statistics such as yards gained and allowed.

“Not everybody sees it the way that I do,” Hennick said in July at the Sharp Combine in Salina. “A lot of people just see your wins and losses. I see what they do in the weight room. I record them every time we test, and we have skyrocketed. We have kind of got that program back up and going. The wins will take care of themselves when it’s time.”

This fall, an experienced Oakley team was selected as the KPreps 1A Potential Breakout Team in the preseason. After two weeks, the experienced Plainsmen are 2-0 and have emerged as one of Kansas’ top early season storylines. Hennick said the most fun part is “seeing these kids grow.” The seniors were Hennick’s first class.

“Seeing their confidence build, how they interact as young men in the classroom,” Hennick said.

In Hennick’s first three years, Oakley was 1-8 in games decided by 13 points or fewer, with five losses by a combined 20 points.

When Hennick arrived, one of his first goals that remained on the white board was winning a MCL game. Oakley won its first league games since 2015. Oakley had lost 20 straight league contests since the start of ’16.

Koch, the will linebacker, leads the Plainsmen with 19 tackles. Junior left side defensive end Corbin Bockwinkel delivered 11 versus the Cardinals, and 13 overall. Temaat has 14 stops, while senior Hunter Scheck has delivered 10. They both play at middle linebacker.

Abell, the strong safety, has 11 tackles, two pass breakups and an interception. Sophomore free safety Will Schmidt delivered a key pick with 1:14 left to seal the win versus Plainville.

Temaat, Schoenfeld, senior John Stoecker, Koch and Annis have started on the offensive line, with senior Cody Zimmerman at center.

“He just brought energy like none other, and he instantly showed respect and care for us,” Abell said.

When Hennick first came to Oakley, he tried to run power. Hennick blamed himself for the look. Oakley has now spread it out more, which has significantly helped Abell.

Last season, he finished with 104 carries for 824 yards and 10 scores, along with 22 catches for 282 yards and five receiving TDs. He tacked on 213 return yards. Abell was a first team all-MCL returner and second team running back/defensive back.

“He sees the field so much better when it’s not so tight and clogged up,” Hennick said.

Assistant Drew Siruta is in the coaches’ box for games. Siruta could see Abell make a move and would tell Hennick, “he’s gone.” Hennick said Abell’s best attribute is his first step.

“Once he gets two steps, he’s going to get three and four and five,” Hennick said. “Just his work ethic alone, he wants to be that guy that when it comes tough, we can say, “Hey, let’s give the ball to him, and he will say, ‘Yup, get in behind me, let’s go. Get on my back.’”