v Sports in Kansas: Statewide Volleyball Notes - 9/9/20 - Sports in Kansas 
Warning: include(../includes/bodytag.php): failed to open stream: No such file or directory in /home/kansass/public_html/ks/news/index.php on line 36 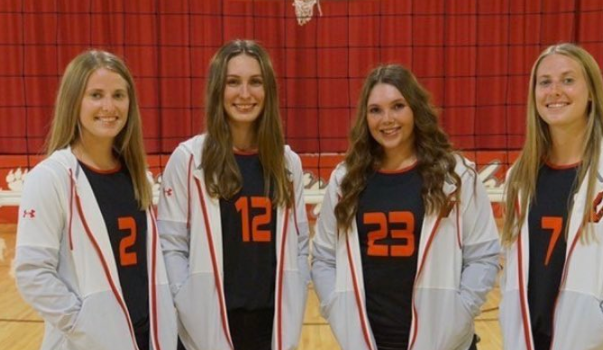 “One of our weaknesses last year was probably that when the going got tough, sometimes we folded,” coach Sharlene Ramsey said.

However, the season featured one of the best wins by any team in Kansas – and showed the high ceiling for Smoky Valley.

“They wanted to prove that you know what, whoever came, we are going to make the best of the day, and I think they just played with such heart and determination,” Ramsey said.

Ramsey is in her third season coaching SV after a long career in club and school volleyball, along with teaching and administration.

In Ramsey’s tenure, Rose, Franklin, Haxton, Heitschmidt, Johnson have started every year. Franklin and Heitschmidt both saw some time as freshmen in ’17.

“What’s been nice is because we have so much depth, it allows us to run people in and out and specialize in front row, back row positions,” Ramsey said.

Smoky Valley has again displayed its elite ability against a challenging early season schedule. SV went 1-1 in the opening Smoky Valley Triangular with a three-set loss to Hillsboro and a two-set win versus Hesston.

In the Aug. 26 Kansas Volleyball Association rankings, TMP was ranked fourth in 3A, and Smoky Valley eighth in 3A. Ramsey was told it marked the first time SV had ever won the Abilene quad. Last year, SV went 1-2 at Abilene with two-set losses to Concordia and TMP and a three-set win versus Abilene.

This fall, TMP and Nickerson are a combined 14-2 when not facing Smoky Valley.

Smoky Valley last reached the state tournament in 1986, according to KSHSAA database archives. SV volleyball is one of many Kansas teams that has high expectations for the best team in school history, opportunity that hinges on COVID-19.

“I think that makes a few of us nervous in that we just are hoping and praying that we have a full season,” Ramsey said. “…That’s the goal of this squad. They want to make it to state and win it – and they can, they absolutely can. The way we played Thursday in Abilene, gosh, I mean, we definitely could make a run. I think that is definitely in the cards for them for sure.”

Rose said the team follows protocol, including masks and social distancing, and thanked SV’s administrators and coaches for allowing the team to play. Smoky Valley has upped the ante and grit from ’19, considering the seniors and pandemic.

“The season could end at any moment, so we are way more determined to win every point and treat every day like it’s our last,” Rose said.

Smoky Valley likes two setters and three hitters with a good blocker on the right side.

“That right side blocker is blocking their best outside, and we have incredible right-side hitters,” Ramsey said. “We have a lot of hitters.”

Five-foot-11 sophomore Madi Tolle and Peters have played on the right side. Peters is well-known as one of the state’s all-time great pole vaulters. She won state in ’19 and set the 3A record. Her personal best of 12 feet, 10 inches is fifth-best in Kansas history. Ramsey called Peters’ work ethic “unbelievable” and one who is willing to do whatever the team needs.

“Belle has an amazing vertical, but Belle is one of the unselfish players that I have ever coached,” Ramsey said.

At Abilene, Johnson delivered 34 assists and Ramsey had 32. Johnson was a perfect 42 of 42 on serves, and SV collected 11 aces. Rose, Franklin, Heitschmidt and sophomore Aubrey Boldra all delivered between 12 and 19 kills. Rose and Peters led with four and 1.5 blocks, respectively. Heitschmidt, Haxton, Boldra and Rose tallied between 13 and 15 digs.

In the loss to Hillsboro, Ramsey believed the team was a “little conservative” on swinging with tips and free balls. In practices before Abilene, Smoky Valley focused on defense and simply swinging harder.

“We have good hitters,” Ramsey said. “And when they swing, we score points, so I think that was a factor.”

Rose said SV “was very aware” on TMP’s positioning. Smoky Valley communicated well on whether the setter was up or down and kept track of Lane. SV worked on placing the defense and neutralizing the setter dump.

“We were digging balls like crazy in the back row,” Ramsey said.

Last Saturday, four elite teams met up in the St. James Academy Slam presented by Spectrum Sports. St. Thomas Aquinas is eighth nationally and first in 5A. Washburn Rural is No. 11 in the country and first in 6A.

At the Slam, Aquinas defeated Washburn Rural in a matchup that featured several Division I players: 25-23, 22-25, 25-20. Martin recorded 12 kills and Bien delivered eight with a team-high 12 digs. Freshman Tatum McMurry earned the team’s Player of the Match award versus Rural with eight kills and zero errors on 16 attempts. McMurry is a Top-150 player nationally for the Class of 2024.

Aquinas has received 17 assists apiece from its pair of freshmen setters Kelsey Schenk and Sophia Bond. Both Aquinas and Rural played with masks on during the match.

In the Central Prairie League, Ellinwood defeated Victoria: 23-25, 26-24, 25-23 on Tuesday. Ellinwood is ranked fourth in 2A, and Victoria is fourth in Class 1A, Division I. The coaches wore masks, but the players on the court played without masks.

In a 6-0 start, Mya Maxwell, Bella Baker (twice) and Brittany Simpson have earned team player of the match awards. Ellinwood also has a victory versus Beloit on Sept. 1: 25-14, 25-23. Maxwell, one of three seniors, leads with 33 kills in the team’s most recent stats. Sophomore Bella Baker ranks second with 21 kills. Senior Anahi Mendez leads with 42 digs.

Beloit is ranked ninth in 3A.

Cheney, with its experienced senior class and second team all-state junior setter Brooklyn Wewe, improved to 6-0 after a pair of wins Tuesday. The Cardinals defeated Hesston (25-18, 25-20) and Hillsboro (25-23, 25-23). Through the season’s first eight sets, junior Olivia Albers paced with 23 kills, and junior Lacy Luehrs had 10 blocks. Senior Lexi Cline delivered 55 digs, more than double anyone on the squad.

Valley Heights is ranked first in Class 2A

Wheatland-Grinnell starting to roll with a 12-player roster

Last season, Wheatland-Grinnell went 0-5 at the Hays tournament, including matches against Salina South, Salina Central, Olathe West and Hays High, generally all at least 5A schools. W-G went 31-3 in all other matches.

In the team’s latest statistical release, junior Livia Schultz led with 36 kills, and freshman Karoline Schroeder delivered 31. W-G has just 12 girls on the entire roster for all four grades and seven play varsity. Karoline Schroeder has 41 digs, with Schultz at 39 and lone senior Kirsten Schroeder at 38.

Maize South, ranked No. 10 in Class 5A, stands at 6-2. Freshman Gracie Morrow has enjoyed a great start with 58 kills and 15 aces through 18 sets. Senior Laurel Jones, a Marquette commit, carries 46 kills with a .298 hitting percentage and 114 assists.

Maize stands at 5-3. The Eagles have seniors as three of its top-four attacks. Baylee Miller has a team-high 61 kills, and Mallorie Koehn is second with 46 kills. Junior Abby Godfrey has delivered 33 kills with a .435 percentage. Koehn has come back from a broken collarbone from the spring.

On Thursday, Maize will have its first home match for its five seniors: Spencer Will-Gallegos, Koehn, Emily Frakes, Miller and Sydney Lentz.

Derby has tremendous height with five players at 5-10 or taller and stands 5-3. Sophomore Addy Brown, also a Division I basketball prospect, stands 6-2 as an outside/defensive specialist. Junior Tatum Boettjer is a 6-3 opposite/defensive specialist and helped Derby reach state last fall after she transferred from Circle. Additionally, seniors Lexi Pitts and Sophia Connor are 5-10, and junior Adi Igo is a 5-11 middle blocker. Morgan Humphrey and Jackie Molloy are Derby’s other seniors.

In southeast Kansas on Tuesday, Pittsburg Colgan defeated Frontenac, 25-20, 25-8, in a key match. Entering the triangular, the Panthers were 3-0 with wins against Humboldt, Carthage (Mo.) and Jayhawk-Linn. Senior Millie Stockard, one of the state’s top players, easily paced Colgan with 35 kills in the first seven sets. Junior Lauren Yaghmour paces with 28 digs. Colgan went 43-2 and 42-4 in the last two seasons after a 35-7 mark in ’17.

Rural Vista is ranked first in Class 1A, Division I and the reigning Class 1A runner-up to Central Plains. RV has wins against Wakefield, Tescott and Solomon and a loss to Herington. The top-three hitters are all seniors: Meghan Brockmeier, Cami Jacobson and Amber Brockmeier. As well, Chancy Johnson is another senior. Meghan leads with 32 kills, followed by 20 for Jacobson and 16 for Amber. Amber and Johnson split the setting duties with 40 and 28, respectively. Brockmeier recently picked up 1,000 career digs for the Heat.

West Elk opens with a pair of victories

Riverton off to hot start

Riverton started the season 4-0 and picked up a 3-0 sweep of Baxter Springs on Tuesday. Jacy Thomasson, who earned MaxPreps Player of the Week in the state last week, is one of the top sophomores in the state. Last week head coach Becky Lipasek picked up her 100th win at the school while she has over 700 in her career.