v Nex-Tech Wireless Athlete of Month: Jonah Ruder - Sports in Kansas 
Warning: include(../includes/bodytag.php): failed to open stream: No such file or directory in /home/kansass/public_html/ks/news/index.php on line 36

Jonah Ruder of Norton is looking for a huge senior season. (courtesy of Norton HS) 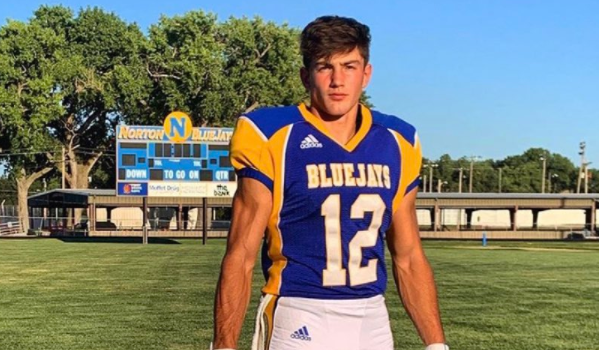 NORTON – During the summer, Norton had a pair of candidates at quarterback with senior Jonah Ruder and sophomore Sean Anderson. They had to replace Kade Melvin, who accounted for 3,082 yards of total offense and 31 offensive touchdowns.

Melvin earned Shrine Bowl honors, signed with Fort Hays and helped Norton post a 9-4 record and its first state championship game appearance in 30 years. Ruder was the team’s top receiver with 40 catches for 653 yards and, like Melvin, was a first team all-state 2A pick. Ruder has picked up offers from Division II schools Fort Hays, Washburn and Colorado School of Mines.

Anderson and Ruder saw limited duty at quarterback in ’19 and combined for 2 of 6 passing for 21 yards with a pair of interceptions. For ’20, Norton elected start the 6-foot-1, 190-pound Ruder at quarterback, a move that paid off in a season-opening 16-14 home victory versus Mid-Continent League rival Smith Center.

Ruder engineered a pair of touchdown drives by the 3 minute, 30 second mark of the first half for a 14-0 lead.

“We knew he was a great athlete, so not a surprise at all,” Smith Center coach Darren Sasse said of Ruder starting. “You want your ball in your athletes’ hands.”

Smith Center eventually tied the game. With 5:18 left, Smith Center had a bad punt snap that went through the end zone for a safety and the game’s final points.

Smith Center was ranked second in 1A in the KPreps poll, and Norton was just outside the top-5 in Class 2A. Norton was the only team in Week 1 not ranked in the top-5 to beat a ranked squad.

It marked the first time Norton had defeated Smith Center since Jonah’s older brother, Jace, was the Bluejay starting quarterback as a freshman in ’14.

The left-handed Ruder is the only member of his family who is a southpaw. He completed 7 of 8 passes for 75 yards in the first half and was 9 of 15 for 108 yards overall. Ruder led the team with 19 carries. He rushed for 34 yards, though 36 in the first half. Before Friday, he had two career rushes for four yards.

“He’s pretty dynamic with the ball,” coach Lucas Melvin said. “He is fast, and Sean does a good job, but right now, we are in a position where we need somebody that can make something happen a little more, and that’s Jonah right now.”

Ruder’s 25-yard punt return, the longest special teams play of his career, gave Norton field position at the 50-yard line with 8:17 remaining in the first quarter. The Bluejays went on a nine-play drive with three Ruder rushes and three Ruder completions. He scored the season’s first touchdown on a 14-yard run up the middle and down the left side with 2:30 remaining in the first quarter.

On the safety, Norton was set up to try and block the punt. Sophomore Silas Jones, the new kicker, made both extra points. Ruder averaged 36 yards on three punts. Smith Center started those drives on its own 25, own 25 and own 14. Ruder had never punted before Friday.

“That helped, because it didn’t give them time to do anything with it,” Melvin said of the punt block formation. “But just a bad snap. I told them, ‘Special teams, you have got to be special, and we don’t want to make those big mistakes,’ and we didn’t. We just kind of maintained special teams-wise, so I was proud of them. They did a great job.”