v Faces in KS: Aaron Powell - Sports in Kansas 
Warning: include(../includes/bodytag.php): failed to open stream: No such file or directory in /home/kansass/public_html/ks/news/index.php on line 36 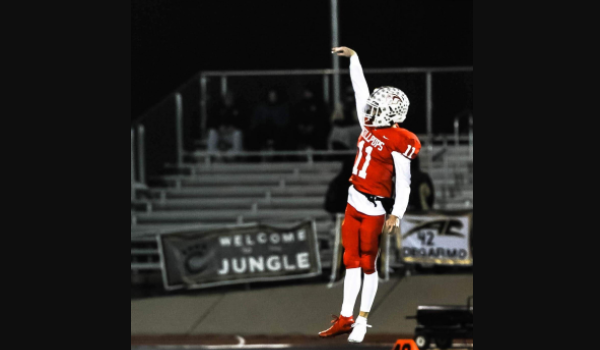 Aaron Powell, senior receiver/athlete, is back for his senior season at McPherson High School after having a huge junior season.

This season, Powell will look to be one of the top receivers in 4A football after a 776 yard and six touchdown season in 2019 for the Bullpups. He has over 1,000 yards receiving in his career as he enters his senior year. He also has five kick off returns for 248 yards with two touchdowns. Powell earned All-AVTCL-II First Team last season and was an all-state honorable mention pick from Sports in Kansas.

He also is a solid track and field athlete with a 21’4” jump in the long jump as a sophomore but didn’t get to have a junior season due to COVID-19. He’s also a 3.4 GPA student in the classroom and plans to play football at the next level.

McPherson returns six starters on offense and five starters on defense for head coach Jace Pavlovich as they are knocking on the door of getting to their first ever state title game. Mac has taken sub-state runner-up each of the last three seasons. The Bullpups finished 11-1 last season.

In addition to Powell, we expect big years from Jayton Alexander, Brycen Labertew, Jayden Dukes, Trey Buckbee, Jonah Scott and Dylan Rinker. Javyn Hill is also a transfer at 6-foot-4 and 235-pounds to keep an eye on as a junior.

We caught up with the all-state hopeful below in the latest Q&A edition of Faces in Kansas below.

This feature is presented by Gateway Mortgage Group, Don Pennington. Proud to support Aaron Powell and the McPherson HS Bullpups.

Nex-Tech Wireless is a proud supporter of sports coverage with Sports in Kansas.

Got interested in playing after watching my brother play and started playing in 3rd grade.

Over 1000 yards all purpose, and going to the State Championship, doing what I do best on both sides of the ball.

Yes, we have a team that has played together almost our whole lives. The chemistry will help us excel in multiple ways.

My sharp route running skills. Speed after the catch. Making defenders miss. Having the ability to make the difficult catch.

Probably the best thing you will ever see. The whole town comes to watch and just gives you chills when thinking about it.

Breakout plays, everybody going 100%, and fights for the win.

Knowing that I can go out there play something that has never switched up on me and something I truly love to play.

Coach Pavlovich has been someone that has been there for me with some tough situations on and off the field. He’s someone that has your back no matter what. He loves his job and I know that he thinks of all of us as one of his own.

Working out in the weight room or on the field getting all our stuff down right away so we were ready when practice started.

My plan is to see where football takes me. That has been the goal my whole life and I am going to stick with it.

If I am not playing football still, then coaching and being around as much sports as possible.

English, A student that knows the respect for a teacher and makes sure to always be listening. 3.4 GPA.

I’ve seen every single movie out there.

I broke my Tibia and Fibula in the semi-finals game my sophomore year and still caught the ball.