v Faces in KS: Brycen Labertew - Sports in Kansas 
Warning: include(../includes/bodytag.php): failed to open stream: No such file or directory in /home/kansass/public_html/ks/news/index.php on line 36

Brycen Labertew is looking for a big year in 4A. (photo: Kendall Shaw) 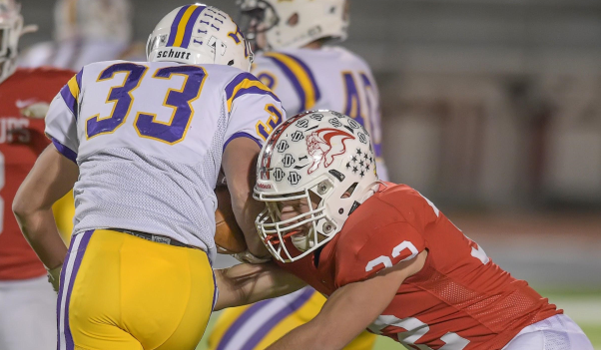 McPherson High School head football coach Jace Pavlovich returns five starters on each side of the football for the 2020 season after finishing 11-1 in 2019. As we’ve noted in many previous features, the Pups are still looking for that first ever state title appearance after taking runner-up in the sub-state in each of the last three seasons. One of those key starters back is senior linebacker Brycen Labertew for his third and final season as a starter for the Bullpups.

Labertew is not only back as a starter he is back as one of the best defensive players in 4A for the 2020 season. He had 86 tackles last season along with an interception, blocked punt and four fumble recoveries. He also had seven tackles for loss from his linebacker spot. He was an All-Non Senior pick from Sports in Kansas as well as an all-state honorable mention pick from multiple publications. He also earned first team all-league. Labertew also recorded 36 tackles as a sophomore in earning all-league second team as a sophomore.

Labertew is very fast at the linebacker position with 4.58 handheld 40-yard dash speed. He is also a very explosive athlete in the weight room with a 275-bench, 375-squat and 295-clean. Numbers that are off-the-charts for a 5-foot-11 and 195-pound kid entering his senior season.

Gone are all-state defenders like Mason Thrash and Cody Stufflebean on the defense so Labertew will be depended upon heavily to be a big-time playmaker in 2020. The Pups are looking for big seasons from Jayton Alexander, Jonah Scott, Aaron Powell, Dylan Rinker, Trey Buckbee and Aiden Hoover. They’ve also added 6-4 245-pound transfer Javyn Hill who will be a junior. While many headline players have graduated the last few seasons, there is some major talent back for McPherson to make them a heavy contender on a wide open 4A West Bracket.

Labertew is also an outstanding student athlete with a 4.57 weighted GPA (4.0 GPA) and an ACT score of 30. He would like to find a college to play football at as well as eventually pursue a degree in Law.

This feature is presented by Labertew Honey Co. Proud to support the Bullpups, best of luck this season!

Nex-Tech Wireless is a proud supporter of high school athletics in Kansas.

My family is a big football family.  My dad and grandpa played in college.  My parents signed me up for tackle football in the third grade. While I didn’t really like it at first, I stuck with it. As time went on my passion for the game grew to a point where I couldn’t imagine my life without it.

My goal is the same as it is every season: do everything I can to help our team make it to and win the state championship. I work every day to accomplish this goal.  On the defensive side this means doing my part to limit every yard we can.

Yes, we have a lot of potential.  We have great coaches and players who have the drive that I think can turn that potential into a reality. We take a lot of pride in our defense which has been stellar the past couple years. Coach Harlin always puts us in the best positions to play fast and aggressive.

I’m quick so I’m able to have an impact on the play no matter where it is on the field. I also recognize plays quickly on defense which allows me to figure out where they want the ball to go.

It is second to none. Our fans are dedicated; it doesn’t matter if we are playing a rival team or not, the stands are always packed. My defensive teammates and I play every down with chaotic enthusiasm, always flying to the ball till the whistle.

There is a lot of pride in being a McPherson Bullpup.  We go all out every game and will be an exciting team to watch.

Every teammate is important.  Some key players that will definitely be counted on will be Jayton Alexander (FS), Jonah Scott(OL), Aaron Powel(WR), Dylan Rinker(QB), Trey Buckbee(WR), and Aiden Hoover(RB).

Being part of a team.  My favorite thing about football is everyone has a job on the field. We are all working towards a common goal.

I run track.  I typically run hurdles and relays, but mostly run track to train for football.

I couldn’t ask for better coaches. They use every practice to pass on what they have learned.  They prepare us for our next opponent whether it is on the field or off.   They are motivating and make us want to push harder each day.

We got after it in the weight room this summer and worked on routes any chance we could get a group of guys together. Teammates held each other accountable.  We knew the work done in the off-season, would impact how we do this season.

I have been reaching out to coaches and am currently trying to find a school that I can play at as well as pursue a degree in Law.  I am hopeful to get in some visits this fall as the pandemic has restricted some of these.

My favorite things to do when not playing sports are hanging out with the boys, playing ultimate frisbee, medicine ball volleyball, and pool basketball.

Settling down somewhere with a steady job.

My favorite subject in school is history. I am a hardworking student with a 4.0 GPA and a 4.57 weighted GPA. I also have a 30 ACT.

I can’t choose one role model.  I have had many throughout my life in parents, coaches, and teachers.  All have impacted me in many ways and have made me the person I am today.

The best place to eat in town is La Fiesta and Imperial Garden, but Buffalo Wild Wings is my favorite place to eat.

I am in choir and love to sing.