v Faces in KS: Jonah Scott - Sports in Kansas 
Warning: include(../includes/bodytag.php): failed to open stream: No such file or directory in /home/kansass/public_html/ks/news/index.php on line 36

Jonah Scott of McPherson is looking for a big year in 4A. (Photo: Cindy Kinnamon) 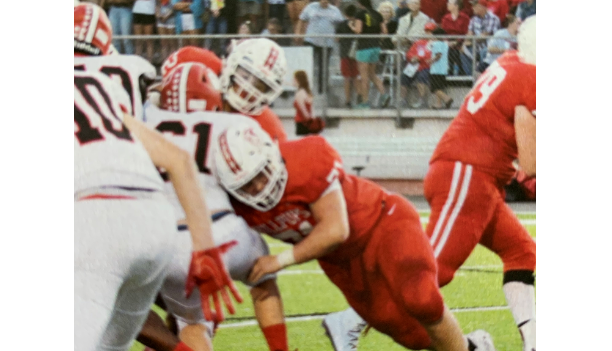 McPherson High School football has had a lot of recent success as it has been knocking on the door of getting to a state football championship game. In facet the Pups and head coach Jace Pavlovich have been in the semifinals the last three seasons and still have their goals on getting to the championship game, maybe 2020 is the year?

The Bullpups lost highly regarded linebacker Mason Thrash and KSU signee Cody Stufflbean from last season but do return five starters on each side of the football. One of those key starters is senior two-time first team all-league offensive lineman Jonah Scott.

Scott may be a player you don’t know a lot about yet but he is one of the top 4A offensive lineman in the state after leading the way the last two seasons as a sophomore and junior. Scott, who stands 6-foot-1 and 260-pounds is a force up front with his aggressive play and very-good footwork. He also has a very-high football IQ and can play every spot on the offensive line. He figures to play center this year after playing guard the last two seasons. That’s probably because he has a 4.5 weighted GPA in the classroom. He was also a Sports in Kansas Non-Senior pick last season as a junior.

Scott is also very explosive in the weight room with a 400 squat and has a 5.1 40-time. He shows his athleticism in the winter as a heavyweight state wrestling qualifier.

It’s much more than football for Scott but he does want to play at the next level but pushes himself as hard in the classroom. He plans on playing at the next level and wants to get an accounting degree to work towards aa CPA then Law School where he can became a tax attorney.

This feature is presented by Midway Motors of McPherson. Proud to support the Bullpups.

This feature is also presented by Nex-Tech Wireless.

I’ve always been a big physical kid and enjoyed watching football.   My parents signed me up for tackle football in first grade and I’ve been playing ever since.

Our goal is to win the State Championship.  Individually, my goal is to help my team in any way I can.

I am aggressive, have very good feet, I know what to do for every offensive line position, and I can take up a gap at defensive line.

There is no better feeling.  The stands are packed every week for both home and away games.  Our fans travel well and offer great support.

The atmosphere is amazing.  This McPherson team is going to be a very fun one to watch this season.

The physicality and the brotherhood that is formed with your teammates.

I wrestled and was a 5A state qualifier my junior year.  In football I am mainly an offensive lineman but I also play defensive line as well.

Electric. Our coaches teach us life lessons, while we enjoy and learn many aspects of the game.

We worked hard in the weight room.  We practiced our technique as well as our plays.

I’ve attended numerous virtual rising senior days.  Colleges ranging from NAIA to Division I have shown interest in me.  Academically, I am interested in pursuing an Accounting degree to work towards a CPA then Law School to become a Tax attorney.

My favorite things to do when I’m not playing sports is to play medicine ball volleyball, basketball, golf, and have Taco Tuesdays with the boys.

Steady job, starting a family, and somewhere north of Kansas.

My favorite subject in school is history.  I am a good student with a 3.9 unweighted and a 4.5 weighted GPA.  I try to push myself in the classroom as hard as I push myself on the field.

On the field it’s Quenton Nelson because he is the best and most aggressive offensive lineman in the NFL.  I’m very fortunate to have many people I can look to as role models including parents, family, and coaches.

The best place to eat in my town is Ristorante Italiano di Famiglia and Dough Co. Donuts.

I’m a history buff and a space nerd.